Comics: quality and quantity on the cheap

The line between comics and graphic novels has started to become blurry. Now that the average age of comic readers has gone up, the themes have gotten more mature and the format has started to change. Most comics used to be never-ending soaps with superpowers. But since most adults like their entertainment in bite-size chunks and don’t feel like chasing after issues of comics they might have missed, more and more comics have rounded off story arcs that can be easily gathered in trade paperback. It has become much easier for the audience to dip into a series for a single story, rather than being committed to it for life (to see how it ends, if ever). Now the publishers are one-upping each other by publishing comics that were previously on sale in trade paperback and bundling them up in cheap editions. For little money, you can buy yourself a hell of a lot of story. Comic giant Marvel has been at it for a while already, with several black-and-white reprints of ‘the best of’ their main titles. But now both BONE and Strangers in Paradise, lesser-known stars in the comic firmament, have also been given this treatment. Since they were already black-and-white to begin with, they don’t lose much in the transition.
At the heart of Strangers in Paradise is a slightly pink love triangle: artistic, sensitive David loves hard-boiled, cynical Katchoo, who loves innocent, sweet Francine, who – in turn – doesn’t know who to love. Surrounding them is a cast of flaky, well-drawn (literally and figuratively) characters. There are plenty of great riffs on relationships and the tension gets upped a notch when Katchoo’s shady past resurfaces and threatens to drag down her and her friends. Considering that most of the male characters act like buffoons, it might come as a surprise that the writer of Strangers in Paradise is a guy. It’s a very woman-friendly comic in a male-dominated field, where female characters may sometimes be strong and independent, but still need to have a waspish waist and big boobs. Four volumes have been published so far. When you get hooked by reading these, you’ll be happy to know the series is still ongoing.

BONE has a lot of stock fantasy elements, such as a princess, a prophecy, a dragon, and a quest. But it also has a trio of big-nosed cartoon characters, an ass-kicking grandmother, ‘stupid, stupid rat creatures’, a talking bug and a sense of humor (unlike, say, Tolkien). It manages to be epic and endearing at the same time. This edition contains the complete story, from the first page of the first issue right up to the planned, definitive end. More than 1.000 pages of beautiful illustrations and quirky, heroic adventuring. Being somewhat hefty, it is also very useful for keeping on your nightstand, to bludgeon burglars with. So do yourself a favor: get BONEd! 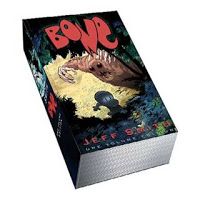