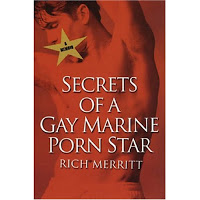 Secrets of a Gay Marine Porn Star sounds like the kind of book you would read with one hand in your lap. But this is not the case – for better or worse, depending on your expectations. It is the autobiography of Rich Merritt, better known in xxx-rated circles as Danny Orlis. Rich initially ended up in the news as the anonymous source for a New York Times cover article that made big waves when it was published in 1998. It illustrated the difficulties of being a gay marine with the American navy, forced to live a double life due to their ‘don’t ask, don’t tell’ policy.

While there are too many uninteresting details in the book, and a fair amount of pages should have been culled, his story is fascinating even if the style in which it is written won’t blow you away. Rich shows himself to be impulsive and eager to please, sometimes arrogant but at other times charmingly open, like when he admits to having had a premature ejaculation problem. By the end of the book he seems to think he now has his life well and truly back on the rails, but as a reader you are left wondering if he could not go off-track again in the future. For the moment things are going well, however: in January he published his first novel: Code of Conduct. Making use of his insider knowledge, he tells the love story of two marines circa 1993, when Clinton was promising to abolish the army’s ‘shush’ policy on gays. It looks to be an interesting and historically accurate read.