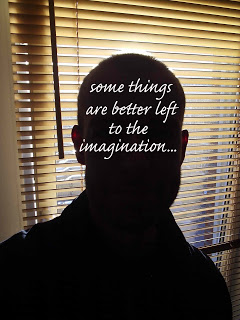 It can be quite a shock to finally see the face attached to a literary or actual voice. Sometimes, it suddenly becomes clear why a radio-personality chose to avoid a medium where he had to show himself or why that successful novelist spent more time behind his word processor than frolicking with cheerleaders. Not only do some of them turn out to be gut-wrenchingly ugly, but being confronted by the physical reality of a writer shatters the image we had formed of him or her in our head.

The mental picture
Writers, especially fiction writers, generally remain an undefined but all-pervading presence in the background of the story. Unless we know more about the author beforehand, they start out as blanks in our minds, to be slowly painted in as we travel through their prose, subconsciously piecing together a personality from the writing style. Pretty much all of the ‘discovered’ characteristics are mental, not physical. One would have a tough time deducing an author’s crooked nose or frizzy hair from a novel. Our self-made mental image of the author can, of course, be wildly inaccurate. Somebody who writes funny books can actually be a depressive and someone who seems like a nice chap to hang out with can actually turn out to be a recluse. It is quite easy to draw the wrong conclusions. But of course, fond as we are of the images we came up with, it can be very disappointing if the author doesn’t live up to them. We can feel that, just as a fictional character can be miscast in the tv- or film-version of the book, the actual writer was somehow wrong for the part.

Putting a face to the name
This is why some publishers go to great lengths to create an image of their authors that they think would suit their audience. Instead of simply keeping the back-covers faceless, the writers-especially the more famous ones-are posed in suitable locations and given props. A romance novelist beyond a certain age is posing in a long, bright pink coat in front of a grand iron gate, supposedly leading to her mansion. A thriller-phenomenon is posing next to a helicopter in a windbreaker, just short of waving the American flag. Another thriller-writer appears on each of his covers with his mean-looking bulldog, both looking ready for a bar-brawl. A self-help guru is ‘spontaneously’ holding his reading glasses, as if he was caught in the act of taking them off. Vast amounts of books show their authors with toothy, awfully strained smiles. There are better ways of putting a face behind the literary voice. If you have a writer of kids books who looks like a Hell’s Angel, don’t put an unflattering picture of him on the back-cover, where he will be giving kids nightmares. Try to make him as presentable as you can. In general, a low-key, classy just-the-face picture will be quite enough for the reader. Or if you want to get creative, hire an artist to draw up a portrait that will suit the book’s design. If they want to take examples from the way pop-stars and painters are getting themselves immortalised, they should check out the two titles below. Bestselling authors have no excuse for misguided vanity publishing.