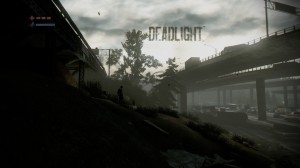 Deadlight is a pseudo-3D puzzler / action / platformer that takes place in a somewhat cliché setting. The world has been ripped apart by a zombie-apocalypse and you are one of very few survivors, trying to track down your wife and daughter. As plots go, it’s not something that hasn’t been done before and it has been done better. Part of the story you can even take or leave, as you will find pages of your own diary that, against all logic and reason, are scattered throughout the levels. There is an obligatory twist ending that is clumsily handled, more groan-inducing than profound or surprising. There is a voice-over narration by the character you play and the writing is corny and on-the-nose, though the voice is appropriately gruff. I have to assume the character was doing voice-over work for action-movie trailers before the end of the world came along. In between the bits where you are in control, there are cut-scenes in gritty graphic novel style that show events that would be hard to capture using the faux 3D playing field. The style in which these are drawn, comes suspiciously close to the style used for the The Walking Dead comics and game.

In case the semi-3D needs clarification; it means you are running through an environment that looks 3D, but you can only follow a straight line through it, running along the screen from one side to the other. As you enter buildings, the sides disappear to show you what’s inside. Being caught in 2D plane doesn’t really help your immersion as you are sometimes looking at the background thinking ‘Well, can’t he just go through there?’ or ‘That object I can’t get to in the back would really come in handy right now’. You just have to accept you can only work within the narrowly predetermined options offered by the game. Most of the time, there is only one way to proceed.

Deadlight makes up for most of its shortcomings by looking and sounding very good, creating a dark, interesting atmosphere. The slower parts of the soundtrack are beautifully sad and during the action bits, the music turns frenetic and helps to speed up your pulse. However, the mood can’t quite compensate for trial-and-error gameplay, clumsy save-points and controls that aren’t quite as tight as the game wants them to be. A few times, the game will spring something deadly on you so fast that there is no way to not get killed the first time you pass through. During sections where speed is of the essence, you will find yourself repeatedly dying because your alter-ego won’t drop himself from a wall at the exact moment you tell him to. He is also a bit particular when standing under a ladder; he may jump straight up and grab it as intended or take a big jump sideways if slightly misplaced. And then when you die (unfairly) you may find yourself in the room/section before the one you died in, meaning you have to replay a bit you got right the first time. It may be an attempt to stretch the playtime (which is still not that long) but it spoils the mix of challenge and enjoyment a bit, adding too much frustration to the recipe.

After you finish the story, Nightmare Mode is unlocked, which apparently does away with the save-points altogether and would have you do a full playthrough without dying. For the life of me I can’t imagine why anyone would subject themselves to that, especially given the sticky controls, but I am sure someone has already posted the video of them succeeding.  All in all, Deadlight makes for an interesting palate cleanser in between larger, more complex games and I would recommend it if you find it for a bargain price. Just be prepared to find yourself cursing at your monitor from time to time.