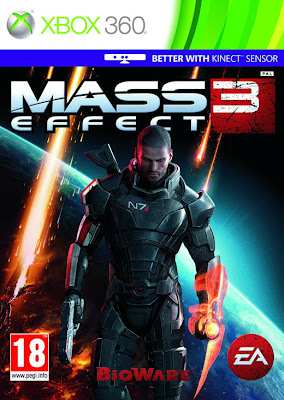 So – my Shepard’s tale is done. The intrepid space hero wore a face I shaped for him, all throughout Mass Effect 1, 2 and 3 and had his talents honed in accordance to my wishes. The decisions I made for him, followed him from one game to the next, impacting his own fate and that of the people around him, making his particular heroic journey (slightly) different than that of thousands of other Shepards. And like all those other Shepards – be they male or female, hard-ass renegade or noble paragon – he saved the universe. Sort of. It was under threat from something called the Reapers, you see, who had a nasty habit of wiping out all the advanced civilizations in the galaxy every once in a long while. The first game had me discovering their existence, in the second game I joined a shady organization to stop their first incursion and in the third game I inevitably ended up kicking the Reapers’ ass just as total extinction loomed.

Developer BioWare did a great job of telling an epic scifi tale, spanning three games, that could be shaped by the player, even if all the tales moved through a lot of the same events and ultimately ended up in the same place. A giant roster of interesting and mostly likeable characters followed you along, their number growing as you progressed, some of them falling by the wayside as a result of decisions you made. Sometimes these decisions were made in an earlier game, meaning a serious investment of time if you’d want to go back and correct them. I was lucky in that the only comrades I lost all went by way of noble sacrifice rather than anything simply tragic. (For which there is ample opportunity, which I only realized after watching different possible outcomes of events on YouTube.) To be fair, the third game doesn’t add a lot of new characters, mostly reintroducing the survivors from the first game as playable ones and giving all – yes, ALL – of your surviving former squad mates from the second game a cameo and providing satisfying closure to their stories in one way or another. As I didn’t lose anyone from that second game, it turned into quite the reunion in my version of the story, familiar faces popping up at every turn. 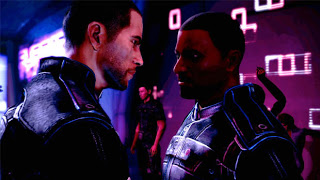 The few new characters Mass Effect 3 adds are mostly a bit ‘meh’. There’s a gung-ho, boring muscleman, there’s a somewhat arrogant and obnoxious alien you can only acquire by buying separately as downloadable content and there’s an AI (artificial intellicence) who is the most interesting and funny (semi-)new addition. There are also new people on board of your trusty spaceship The Normandy whom you don’t control as part of your squad who but who you interact with and potentially romance through conversation. Among these is a first for the series: a gay male love interest. Your shuttle-pilot Steve Cortez lost a husband tragically and is yours to emotionally support and then to roll around with if you feel like it. Though you could romance a woman as a female Shepard (FemShep in fan-slang) in part 2, supposedly a gay male romance option couldn’t be worked in due to logistical and time-constraints according to BioWare. But giving in to the criticism that it can’t be that much work to switch around some pronouns in a cut-scene that for the rest just switches out participants, they have now remedied the situation. There is a second and more interesting gay male romance option as well: if Kaiden Alenko survived your version of Mass Effect 1, you can move on from comrade-in-arms bromance to full-on romance, despite him not showing any interest of the kind back then. Unlike Cortez he is not gay-all-the-way however and can also be romanced if playing as FemShep. There was a predictable outcry from sexually insecure gamers and right-wing, nutbag ‘family groups’ who felt violated somehow that a character would matter-of-factly state same-sex interest and when shown enough friendliness even make a polite pass at the player. Thankfully, there was an equally strong backlash telling these people to shut the fuck up and just not go down that completely optional path. Which actually rings true for real-life as well. 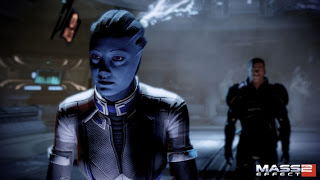 Though Mass Effect 3 is mostly the pay-off to part 2’s set-up and these two very similar parts are stronger when seen as a whole, there are some minor changes to the gameplay. There is no more boring scanning of planets, looking for rocks and minerals to upgrade your equipment, though the same galaxy map is now used to make you scan for War Assets, needed to increase your forces against the coming Reaper invasion. While somewhat amusing for a minute or two, it feels like padding and a waste of time. Further streamlining to just the best bits would have been welcome. The hacking mini-game was thankfully ditched and there are more options to upgrade weapons this go-around, bringing back elements from the more fiddly and RPG-oriented Mass Effect 1. There were also a few more minor recurring bugs to contend with: Shepard would occasionally ignore one of my commands and had a tendency to stick to cover unintentionally when moving around the battlefield.

A new multiplayer mode lets you fight with friends against hordes of enemies from the Mass Effect universe. As I tend to have zero interest in multiplayer unless it’s local split-screen, it was annoying that BioWare linked these modes to the single-player campaign. To get the highest score and therefore the ‘best’ ending to your tale, it helped to either play the multiplayer or to play one or two not-all-that-great side games available on the iOs operating system. Doing this gave you a score-multiplier in your single-player game. I can see how a developer would want to give players a gentle nudge to try out all aspects of their franchise and acquire add-ons, but it seems very wrong to practically force players into a multi-platform experience and to fuse a multiplayer element into their singleplayer game. I do hope that this mixing won’t become a trend: I mostly like my games to be a solo experience and presented as a complete, self-contained package. 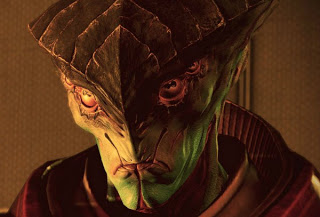 Publisher Electronic Arts (EA) and BioWare got flack for the above but also for some other dubious practices: Mass Effect 3 has an ’extra’ available character for your squad with associated missions, who could be bought as downloadable content the day the game was released. The base code for this content was already present in the released game. Admittedly, there is time between the development wrapping up and the distribution of a game and BioWare’s/EA’s defence has been that the time was needed to complete the programming on it. But if the content is integral (if not crucial) to the main game, it is not surprising that you alienate fans who bought the game full-price as soon as it was released and now have to shell out even more for the ‘complete’ experience straight away.

With Mass Effect 3, as with most other games these days, it seems that most loyal, eager fans actually got the worst deal. It’s common for gaming companies to reward early buyers, to make sure they buy the game full-price, rather than wait a few months to get it massively priced down (as generally happens with games). But it’s becoming pretty much standard practice that releases are rushed out the door while still containing a fair amount of bugs, which may do things like corrupt your game-saves or crash your game, requiring downloadable patches to be installed to fix them. In the case of Mass Effect 3 there was a bug that caused people who created their own look for the lead character in Mass Effect 1 and then carried it over to the other games, being unable to import ‘their’ face. (An odd oversight, considering that bringing along ‘your’ character through the entire trilogy was a big selling point.) I also ran into this problem and though it possibly shows how much of a nerd I am, I put off playing the game until the issue was (mostly) fixed, not willing to play on with a character who didn’t look like ‘my’ Shepard. By the time BioWare corrected the error, I could have bought the game a lot cheaper. The most logical thing gamers can do to not support this pay-the-most-get-the-worst system, is to wait out the inevitable bug fixes and then buy the game for less. However, as hype tends to rule and people are impatient, I don’t expect the system to change. 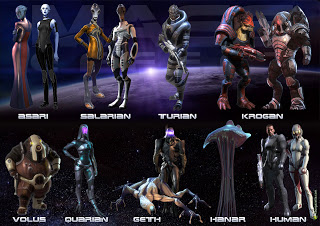 Business gripes aside, I love the mostly serious, sometimes silly and generally cheesy Mass Effect universe. There is a lot of attention to storytelling detail and effort made to build something that feels alive even outside of your own story. For example: as you walk around the space station called The Citadel, you will hear snippets of random conversations a you pass chatting couples. Each time you pass a particular set (who will remain lingering in the same place bizarrely even when you leave for a long period of time), the conversation will advance a little, until you’ve heard their whole story which possibly includes a surprise or twist. (After which, again somewhat bizarrely, the conversation loops back to the beginning.) You do have to be on your guard and take every chance you get to start up a conversation, be it with strangers or your crew. I accidentally dropped out of my by then ‘long-term relationship’ with the blue-skinned Liara, dating back to Mass Effect 1 (literally), because I missed a meeting in which I was supposed to reaffirm it and I was mightily confused when she started acting distant. I could only fix it by going back and replaying a few missons. 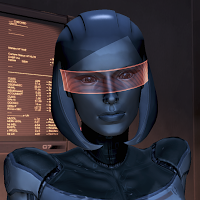 There has been backlash about the ending(s) to the main plot, which is being remedied by BioWare releasing free downloadable content to expand on it, explaining things a bit more. I am curious to see what they’ll do and have to agree that the entire climax narratively disintegrates when exposed to logic, but ‘my’ ending contained a visual so massively, lovingly cheesy in a sci-fi-from-the-50’s kind of way, that I was able to forgive the shortcomings. I am tempted to replay the games as a renegade kick-ass FemShep, instead of my paragon, noble male Shepard, making different decisions, but as I pretty much got the best result the first time around and it would be a massive time investment, I doubt I’ll get around to it. When it comes to exploring alternate outcomes in alternate realities, thankfully there are rabid fans who have put it all on YouTube. Farewell Shepard, it was great being you.