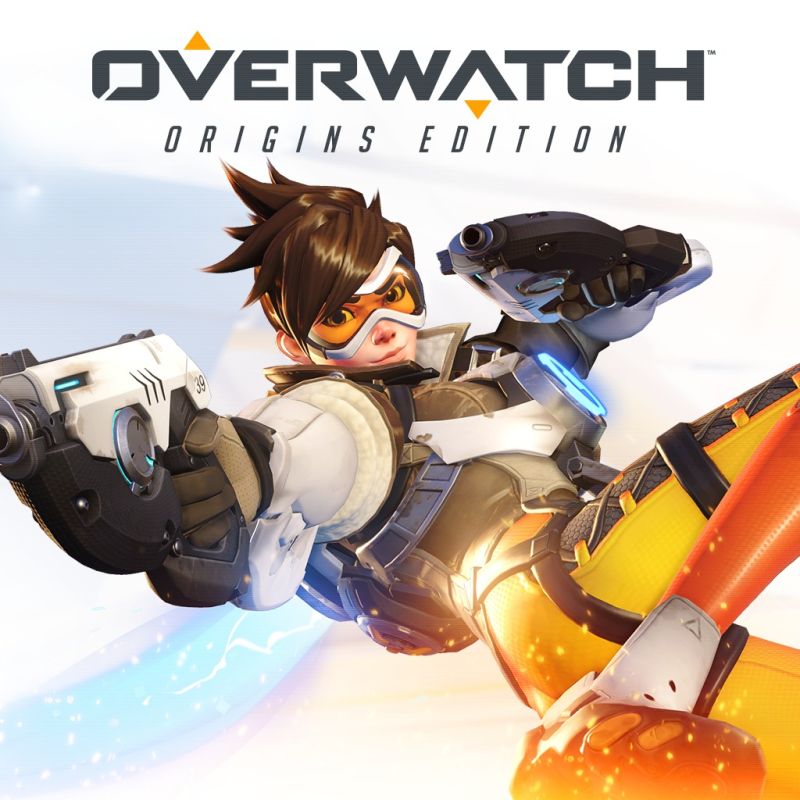 Overwatch came along at a perfect time for me. Star Wars: Battlefront had just taught me that online gaming with strangers may not be as masochistic as I initially feared. And now arrived a much-hyped, colorful online multiplayer game that seemed hellbent on maintaining a friendly, positive community. In fact, I jumped in only a week or two after the game went on sale, rather than wait until the first price-cut, my natural first instinct as a frugal Dutchman. 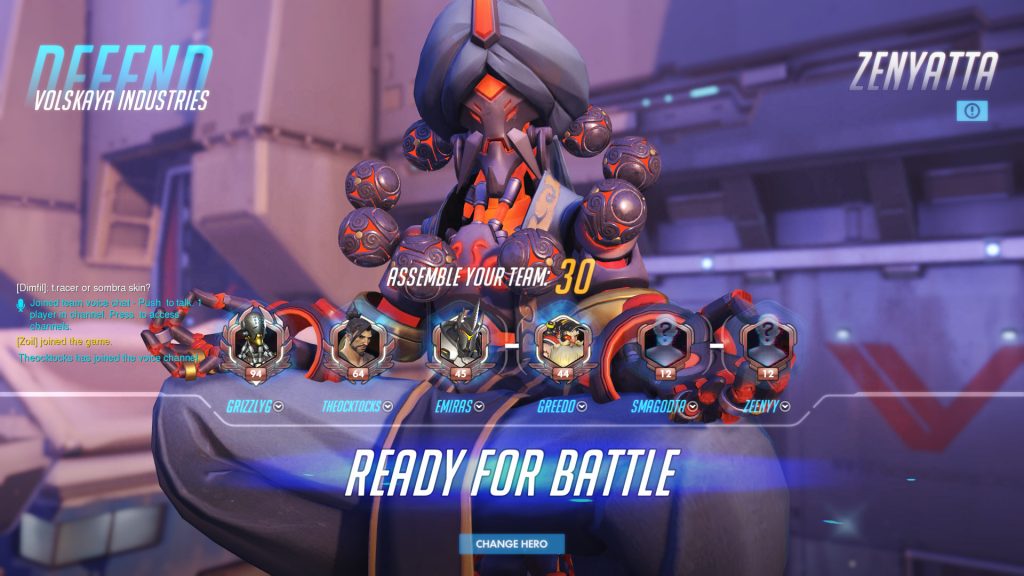 Overwatch doesn’t reinvent the genre as much as refine it and polish it to a fine shine. In the main mode, two teams of six go head to head in a variety of settings (Wild West, Egypt, Nepal, a movie set, futuristic cityscapes and so on) and they have to either grab and hold a random piece of ground – a ‘point’ – for a certain amount of time or they have to escort a moving payload across a map to the end point while the opposing team tries to prevent them from doing so. Each player can pick a character with a unique set of abilities from a roster of over 20 to suit their play-style. Anytime your character gets offed, you can switch to one of the other characters before leaping back into battle if you think that the other one may be better suited for the challenges the opposing team is throwing at you. 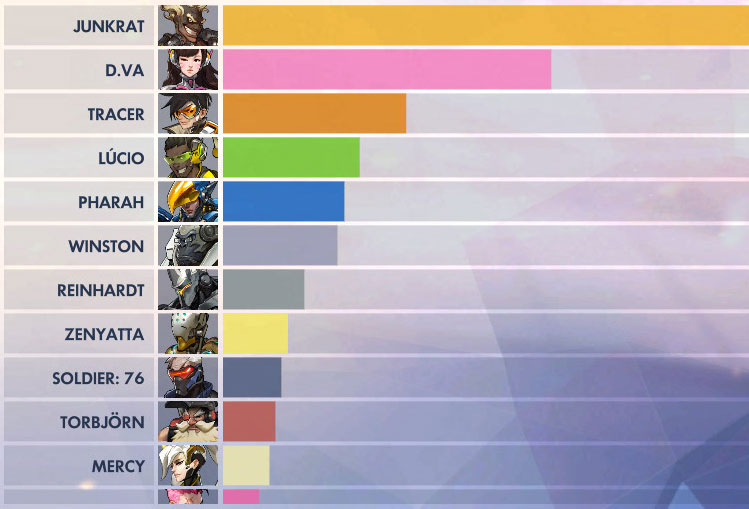 The characters have been carefully balanced and each one has certain strengths, but also weaknesses that make them especially vulnerable to certain other characters. Think of it as an elaborate and more dynamic game of ‘rock, paper, scissors’. Although you still have to be capable with your pick if you want to make a valid contribution. The cast is too big to go into details, but there are four main categories. ‘Offence’ does well with attacking, ‘Defense’ is good at holding a point, ‘Tanks’ are generally slower but can take and deal out a lot of damage and ‘Support’ characters focus on healing and helping other players from the same team. Each character has an indicated difficulty level to show new players how tough the character is to master. Usually a tricky character combined with a skilled player is a lethal combination. 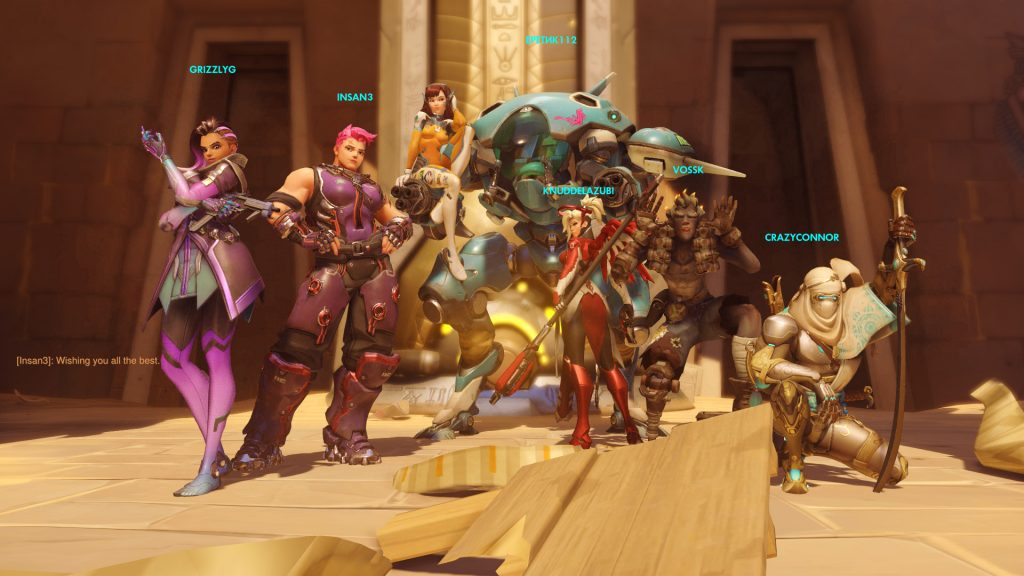 There is a story behind the world of Overwatch, as presented in a series of short animated films. They are fun to watch but don’t add much to the playing of the matches. There is no logical reason why you are fighting against what is essentially a team of Evil clones. Who are Evil just because they are trying to oppose you doing something seemingly kind of meaningless. Still, the charm easily compensates for the lack of clear motives. It doesn’t matter why you’re taking a point or transporting a thing, the only thing that matters is how much fun you have doing it, outsmarting and/or outgunning your opponents.

There is a practice range and you can also practice against A.I. enemies to make sure you have some clue of what you’re doing before you jump into a ‘real’ match and risk frustrating your teammates by messing up horribly. In a team of just six, a sucky player can be the deciding factor between winning and losing. If you’re playing by ‘solo queuing’, you will get thrown with five strangers into a team that has been ‘balanced’ by behind-the-scenes calculations. There may be a few high-level players combined with newbies to level things out, or you may end up in a group of players at around the same level as you. What the game tries to do is compose ‘fair’ games of teams of about the same skill butting heads. This means that as you play, you will likely lose about as many games as you win. Frustrating maybe, if you’re trying to stand out from the crowd, but it guarantees that in solo queue at least, everyone will have a win regularly. Even if they don’t make the biggest contribution to it. 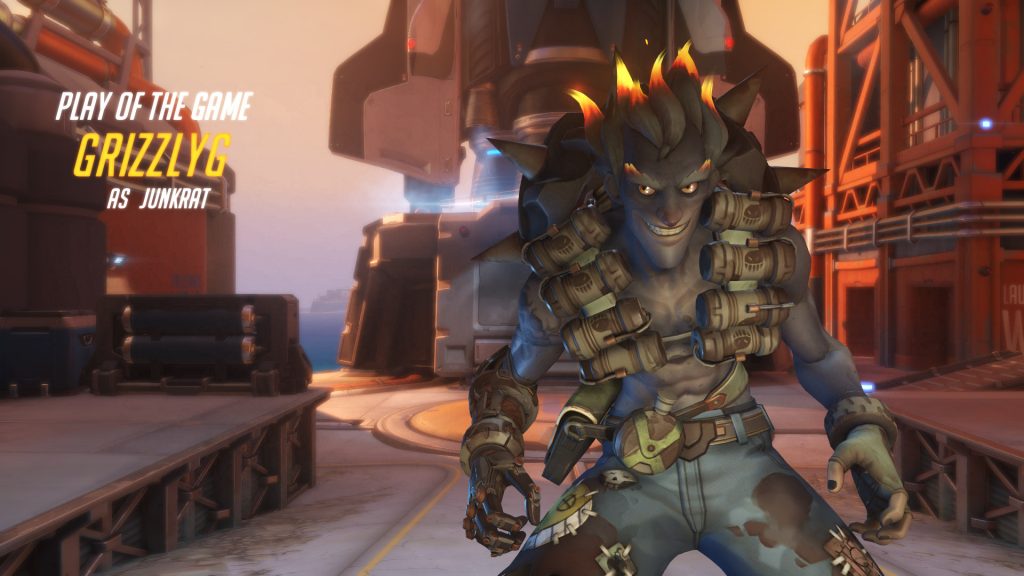 If you are feeling more competitive, there are modes for you to try and rise above everyone else on the leader-boards and you can also compose your own team of friends. But this requires offline coordination of course. Solo queuing has just about the right combination of lightness and randomness for me. Some may prefer making a plan and careful, optimized coordination of the action, but I actually like teaming up with silent strangers. Sure, there is a chat function, but sometimes there are language barriers and I foremost play to entertain myself, so following someone else’s instructions does not appeal. I tend to stay off the chat channel and do just fine and I have the feeling most gamers do the same.  Occasionally you will get steamrolled, your team floundering and failing to form a cohesive whole. But when it clicks, it feels beautiful. Forming a strategy with a group of unknowns, just by observing what they are doing, adding what you think is needed and seeing how it all adds up to something larger than the sum of its parts. Also, with everyone anonymous I do not have to face the fact that I may be teamed up with players half my age or younger. 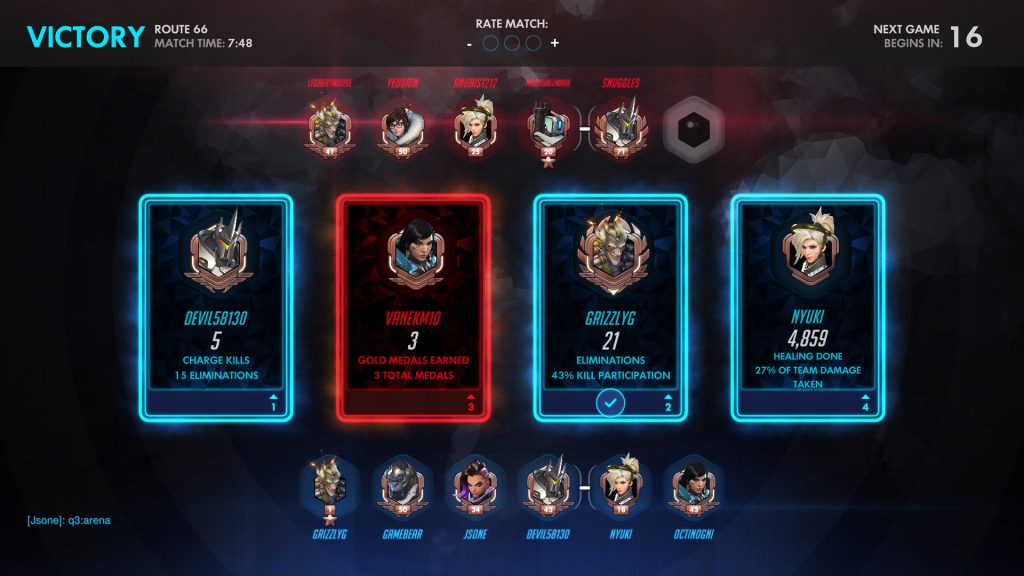 After each match, players who achieved something noteworthy during the match are listed and the other players can give one of them a ‘like’ to show their appreciation. Additionally, one player is highlighted and a short moment of their gameplay video shown to all the players. The idea is that this highlight shows something especially cool that happened, but in practice this almost always comes down to someone eliminating a large amount of players in a short time. The oddness of this ‘Play of the Game’ is such that it has given rise to a meme. I have been the deciding factor in a match from time to time, not receiving the title, and have lucked into a Play of the Game in games in which I was clearly bad otherwise. Sometimes you are impressed but more often you will be bored or incredulous. Recently I scored an embarrassing Play of the Game that just showed me walking off to a Health Pack I turned out to not need, while my turret – out of sight – scored a few kills. It must have baffled anyone watching. 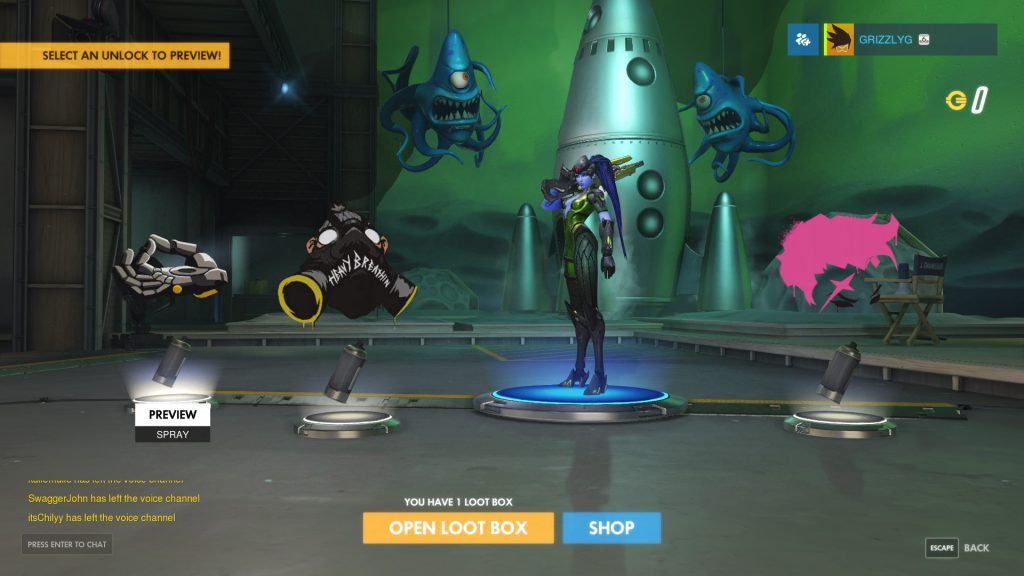 Occasionally a new character or location is added to the game without extra cost, for more variety. What Overwatch will cost you is the initial price of the game, plus what you inevitably spend on ‘Loot Boxes’. These are given as a reward for ‘leveling up’, which you mainly do through achieving personal bests and playing matches. These goodies are purely for fun and don’t affect gameplay. There are skins, catchphrases for your characters, graffiti sprays and emotes. The distribution is random however, so if you want a particular item for your favorite character, you are out of luck.  You will have to hope you randomly get it or save up enough ‘credits’ that are also found in the boxes or given to you if you get an item that you already have, to buy the one thing you want. As leveling up goes a bit slower at higher levels – because you achieve less ‘new’ things than you did in the beginning – you may get impatient. Which is why you can also buy Loot Boxes for real money, and then hope that what you want turns up in one of them. Sneaky.

I like how strict production company Blizzard is with policing bullying and negative behavior. This does not keep there from being a lot of verbal abuse in the competitive mode, as there are higher – imagined – stakes there. But with most people leaving the audio channel off in solo queue and them often being too busy playing to type abuse in chat during the actual game, the nastiness is limited. Blizzard even trolls people who are being rude if what they type is recognized as such. (Such as the phrase ‘gg ez’ – which means ‘good game, easy’.) It will change it to something like ‘I’m wrestling with some insecurity issues in my life but thank you for playing with me.’ or ‘I’m trying to be a nicer person. It’s hard, but I’m trying, guys.’ And if someone gets caught using a program to cheat (like software that auto-aims) they are immediately banned for life. 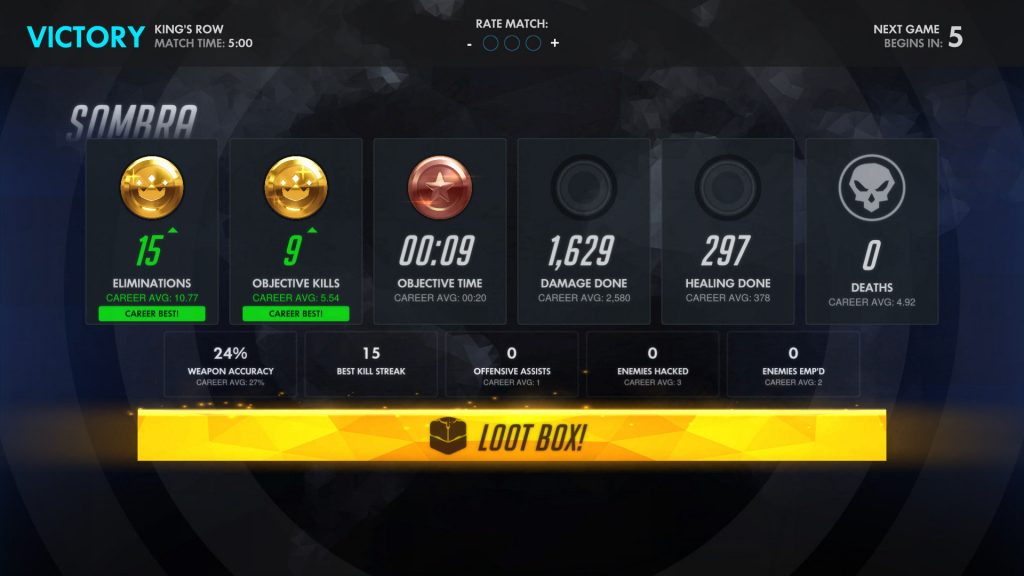 Overwatch is addictive. There are a decent amount of very different characters with varied play-styles which means you can replay the limited amount of maps on offer over and over again without getting bored. It is repetitive but it takes a long time for it to start to feel repetitive. One problem does become apparent as you play a lot, which is that you will likely end up gravitating to just a few characters that you are good with. You may be tempted to try and master them all out in the field – rather than against A.I., which just isn’t the same – but that can lead to blunders, losses and angry teammates. But you will want to shake things up for yourself just to not get bored. As a compromise, I tend to start with the character I want to practice and switch to one I am skilled at – Junkrat, D.VA – if things go sideways. 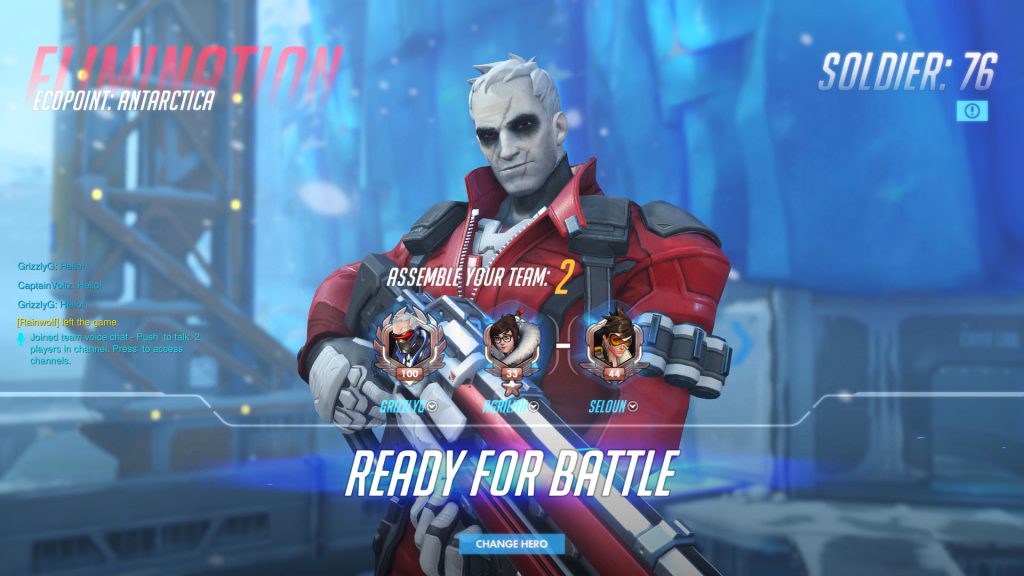 Because a match will last about 15 minutes at maximum, it is a perfect, fun thing to do for a round or two before going to bed after a stressful day. Though if you jump in – and I do highly recommend that – you will have to watch that the game doesn’t absorb all your free time. Because of its immense popularity, this game will be around for many years to come, so there’s no rush to get all you can out of this deeply entertaining online multiplayer phenomenon.

For more gameplay videos, find me on Twitch.