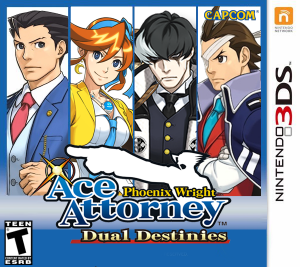 Phoenix Wright: Ace Attorney – Dual Destinies doesn’t change the series’ formula, but it does upgrade the presentation and fine-tune the gameplay a little. There are now 3D anime scenes scattered throughout to liven things up, the character animations are more refined and the locations are 3D diorama’s with subtle movements in the background. New to the franchise is the ability to rotate your way around a crime scene during an investigation.

The gameplay is a bit more streamlined in that you will rarely get stuck, not sure what to do to make the story advance. If you’ve done all you can at one location during your investigation, the characters will point this out and either suggest the next course of action or – if there is just one logical thing to do – will just do it without your prompting. Come to the end of a testimony in court, and the game will tell you if you should be presenting evidence or pushing for further testimony. It’s subtle, but makes things easier, not taking away from the gameplay, while improving the storytelling. 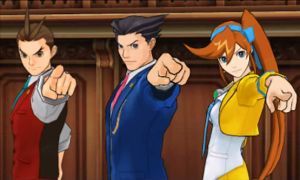 Dual Destinies puts you in the shoes of no less than three attorneys this time, each with their own special ‘power’. Two of these are recycled from games past, one is new. Phoenix Wright has a pendant that allows him to spot when someone is hiding a secret and he can throw evidence at them until their mental resistance (visualised as ‘psy-locks’) breaks. Apollo Justice’s bracelet helps him spot body language that shows when someone is lying. And newcomer Athena Sykes has an electronic gizmo that helps her pick up on discordant emotions. By pointing out emotional oddness during testimony, she can dig into memories until the truth is revealed.

Dual Destinies turns into quite the reunion of characters from previous games by the end. Past events and personal connections are often hinted at, rather than spelled out, as these could be spoilers for previous games. But all characters are painted quickly in broad strokes, so that you’ll get the gist even if this is the first Phoenix Wright game you play. The Wright games have always been eagerly jumping backwards and forwards in time anyway, even within a given entry, so playing them out of order won’t ruin your experience. 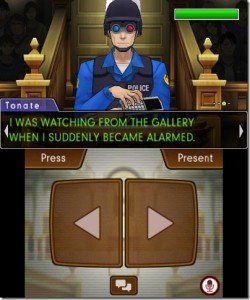 The story and characters are, as always, outlandish and charming, all the cases tying together in amazingly convoluted ways. The final two cases especially bleed into each other and drag a little, even if the emotional investment gets amped up to a hysterical degree. The climactic showdown pushes the boundaries of surrealism even by this series’ already high standards. The anime scenes are a nice addition, despite being massively corny and despite Athena Sykes’ voice being annoying in them. I know the high-pitched schoolgirl voice is a big thing in anime, but it infantilizes the character and it grates.

I was surprised and happy to see a bit of a GLBTQ representation in the game. There is a funny, rather sweet genderbend and a throwaway line hinting at a lesbian love-affair. However, there is also a screaming queen with mobile phones for shoulderpads. (I know some queens who would kill for that.) In the translated text (from Japanese), he is called a ‘deviant’ at one point, but in context this seems to refer to the character’s extreme narcissism rather than his all-but-spelt-out sexual orientation. It’s hard to take offence at this caricature, as he is hardly more over-the-top than anyone else in the game. You can’t really imagine him loving anyone but himself. 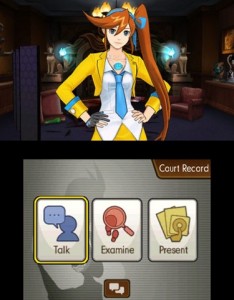 For newcomers, this game offers the smoothest point of entry when it comes to gameplay. It’s more varied than others, and offers more guidance. It also looks the best. It mostly avoids spoilers for previous entries. Should you want to follow the chronology: the original Phoenix Wright: Ace Attorney trilogy is available for Android and iOs devices. (As well as for the DS.)

Dual Destinies is a digital download from Nintendo’s 3DS store. A light and goofy stand-alone case that should last you around 4 hours is available separately as DLC. This features, among other things, a vet who has an astonishingly cute penguin nesting in his hair. Because that’s  just how the Wright universe rolls. 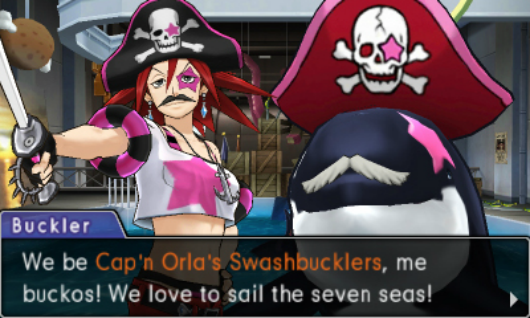