The biggest surprise about Stick it to the Man! is that it was not made by Psychonaut‘s Tim Schafer. This engaging puzzle-platformer certainly seems to have his handprints all over it. The look is cartoony, stylish and oddly familiar, the writing is funny with dark undertones and there is an obsession with mindreading. The tone is definitely Schaferesque. But nope, the game was directed by Klaus Lyngeled and written by Ryan North, neither of whom I know anything about.

Pedigree aside, Stick it to the Man! can stand on its own in terms of quality. The game pulls off some striking visuals due to the conceit that the player is getting a side-view of a world composed entirely of paper and cardboard. The pseudo-3D world has buildings with walls you can rip away to look inside. And you can impossibly swing between parts of the levels by using the open space on the side of the viewer. The world is artificial, charming and impossible, putting you in the right frame of mind for the story the game tells. 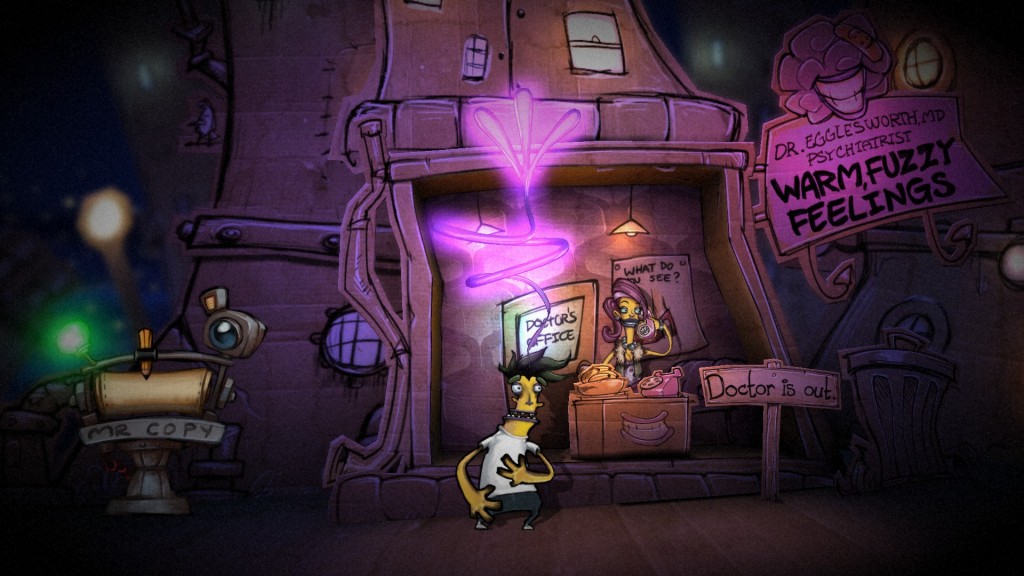 You are Ray, an employee at a hard hat testing facility. Following an incident, an alien takes up residence in your brain. This somehow leads to a large, pink hand sticking out of your head, which allows you to read the thoughts of others and even to grab those thoughts and materialize them. I have no doubt there is a reasonable, scientific explanation for all this, using quantum theory.  In terms of gameplay, you gather items or thoughts – in sticker form – from a scattering of strange characters, and stick them where they are needed, to get past often bizarre hurdles. There are also bits where you are chased around the environment by evil operatives, which require quick reflexes and a bit of luck.

There is an intuitive logic to the puzzles you’re required to solve. Rarely will you be able to predict the chain of events your actions will set into motion, but most steps make dreamlike sense on their own.  For instance, when you find yourself in possession of a singer’s voice and see a megaphone with a void to fill, matching them up doesn’t require a big leap of imagination. But what happens after a successful combination is hard to anticipate. The storylines you encounter are loopy and twisted. Meet the woman with a fixation on shiny teeth! Meet the man with a fixation on his goldfish! And see the emotionally abusive father-son circus act! Things do not always end well for the characters and some even end up dead, but death is by no means the end in this world. 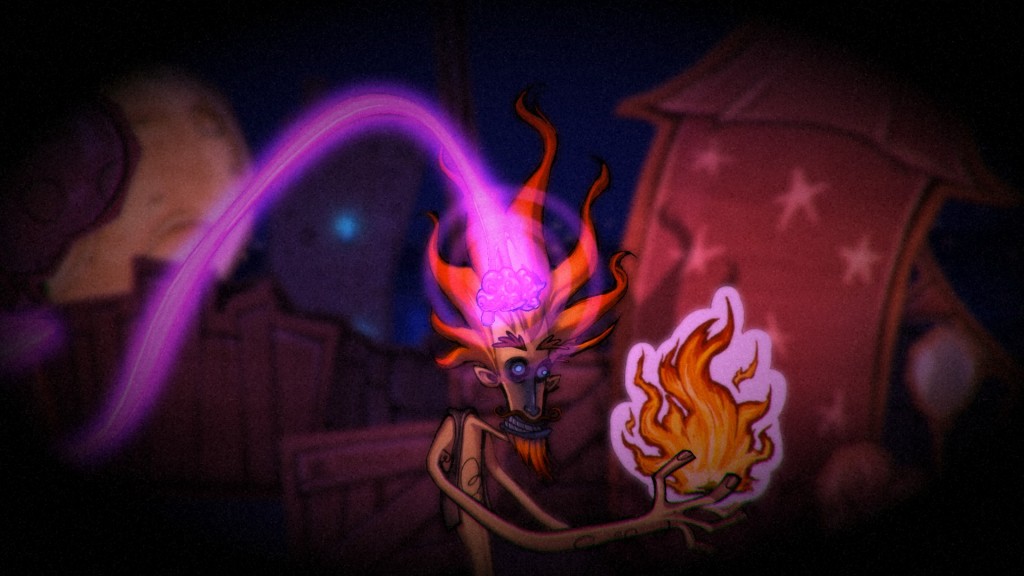 Exploring the stages and their strange inhabitants is the main event and thankfully this is a lot of fun most of the time. You will need to read nearly everyone’s mind and investigate every corner of each stage to make sure you didn’t miss a vital sticker, to avoid – ironically – getting stuck. There is some trial and error involved. The same goes for a few sections where you get chased and have to escape. These can get annoying, as the somewhat fidgety, context-sensitive controls for your extra appendage don’t work too well under pressure.

Your foil in the game is an evil individual known as The Man, who wants to use Ray’s alien buddy for nefarious purposes. Your goal – predictably – is to stick it to this man. By the time you get to do this, though in a roundabout kinda way, you’ll be ready for the story to end. Stick it to the Man! times its exit just right. Not too soon and not too late. It left me with a big thought bubble above my head, filled with a happy memory. Tim Schafer would be proud! 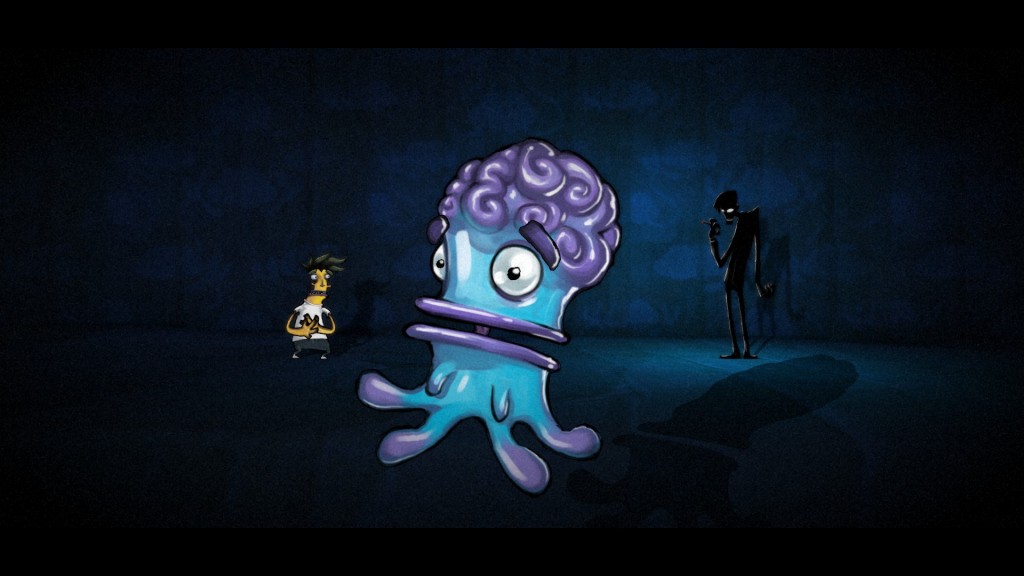 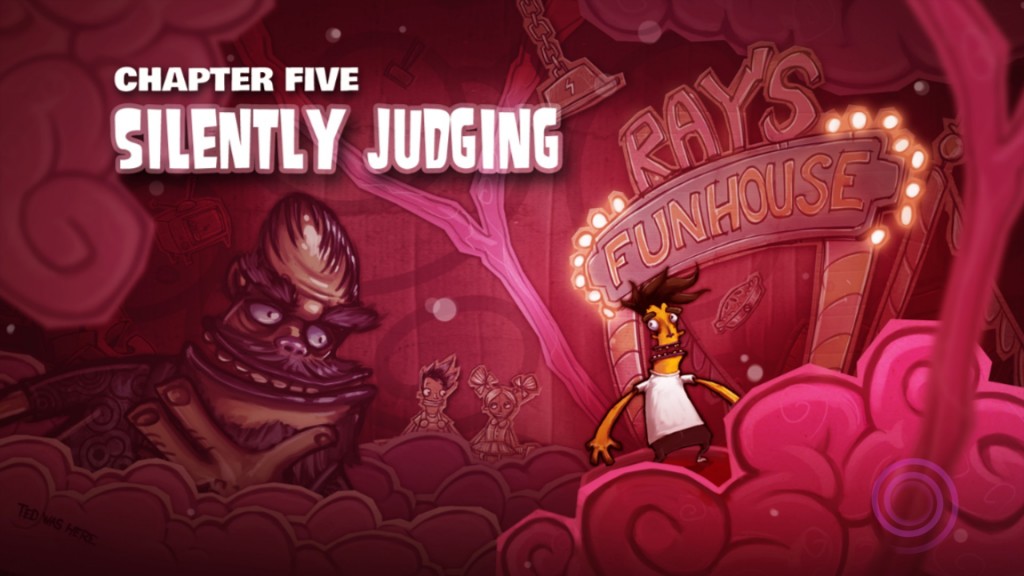