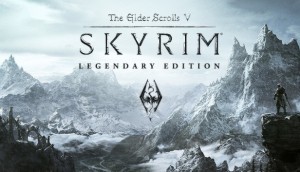 Skyrim is an epic sandbox fantasy adventure filled with unintentional comedy. You start out fairly weak, as a race of your own choosing, each of which comes with some special perks. Then you start to level up your character as you choose, depending on your play style. As you walk around a vast world map full of interesting vista’s, nearby locations will pop up on your ‘radar’, inviting you to drop by and explore. Some are just populated by some thugs to dispatch, while entering others will trigger a small quest contained within that location. There are a few big towns that serve as hubs. The locals there will trade with you and offer up quests that send you to some of the same locations you might just stumble upon otherwise. You can join one of various factions – mage, warrior, assassin and so on – which also opens up quests. 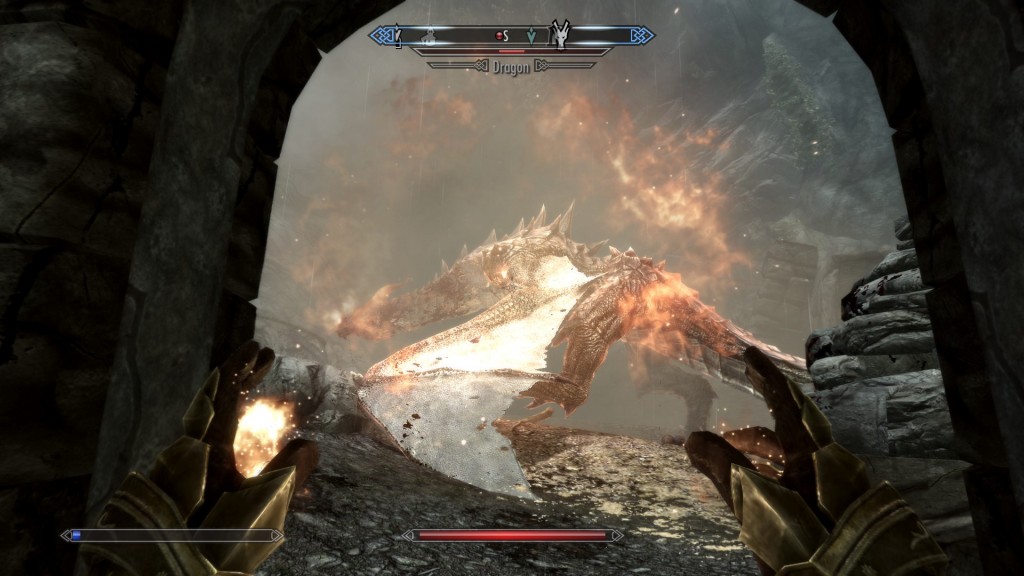 There is an overarching story which involves you being a Dragonborn, fated to stop the end of the realm, by defeating a particularly nasty dragon. You will be set upon by dragons as you go around the world, having to fight them and then absorb their soul to power special abilities called ‘shouts’. These fights start out epic and interesting, but end up getting a bit routine and feel like an interruption later in the game. The main story is just a small amount of the total content, and rushing through it would be missing the point of Skyrim. It would also likely be frustrating as you are underpowered if you don’t level up by doing side-activities. These mostly consist of fighting your way through various bandits, animals, mechanoids, monsters and mages to get to an object, which you then add to your arsenal or hand into someone for a reward. Most missions are given a special little spin, a backstory, but this can’t help the fact that they start to feel very samey, the more of them you play through. If you’ve played one of Bethesda’s Fallout games, the framework will feel very familiar right from the start, only instead of a post-apocalyptic world, you find yourself in a fantasy realm. 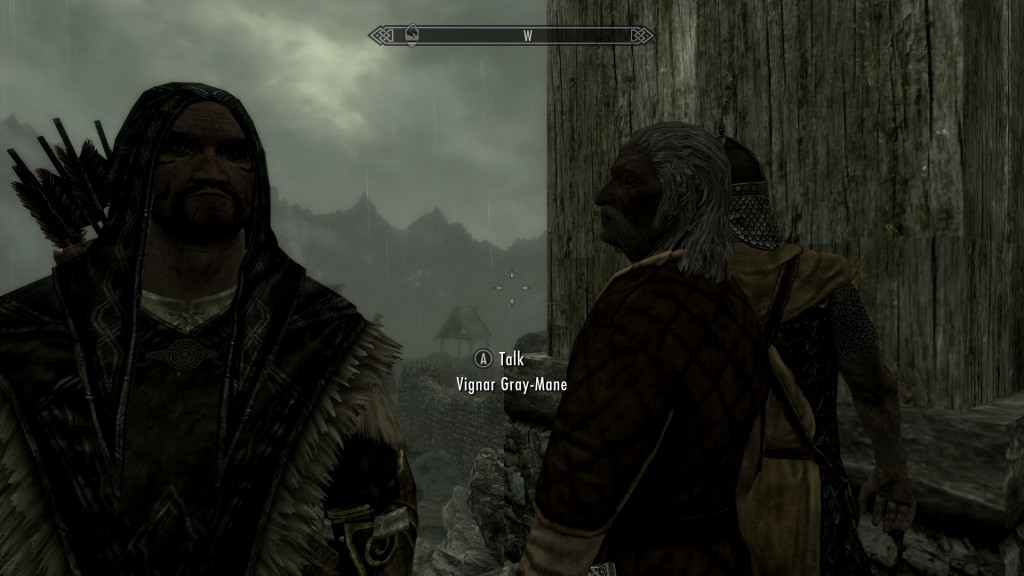 Despite there being books full of lore you can read within the game and an expansive history to the world, it is hard to feel completely involved. Your interaction with the massive cast of characters feels limited and artifical. The repeated lines that people blurt out about their personal lives as you walk by, despite you being a perfect stranger, makes it seem like Skyrim is populated by people with Asperger Syndrome. They have no boundaries and are really, really bad at keeping secrets. They also have multiple personality disorder. While new dialogue may pop up if you’ve helped someone, their generic initial dialogues can also still be picked, in which they talk to you like they never met you before. Certain specific phrases are repeated all across the realm, making it seem like a hive mind is at work. The most famous one spawned an internet meme: “I used to be an adventurer like you, but then I got an arrow in the knee.” You’ll also start to pick up on the fact that a lot of people are sharing a limited range of voices, one of them doing a Schwarzenegger impression. These character quirks are all just symptoms of the practical limitations of having a really big game world, but it does lead to some eye rolling. 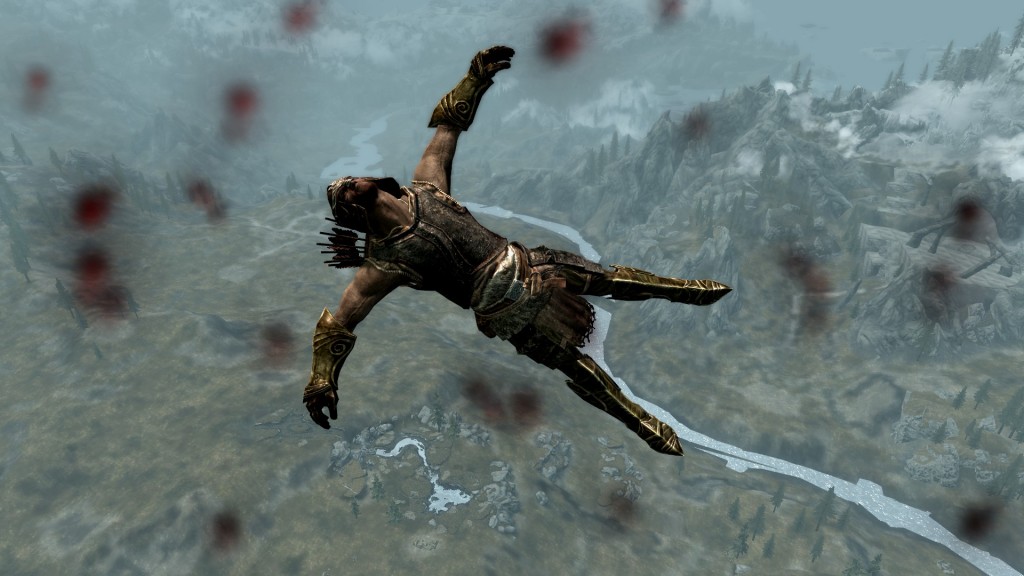 Skyrim is full of entertaining glitches. Most of these seem to be caused by the game trying to execute multiple, independently running scripts at the same time. A few passing NPC’s may start throwing non-sequitur lines at you simultaneously, drowning each other out. Or while you are having a chat, a character in the background may be going through his behavioral subroutines while never breaking eye contact with you, creepily staring. More annoyingly, someone may suddenly, involuntarily lock you into a conversation, making you unable to move or look around, while you are under attack. So you can end up frantically clicking buttons to bail out of a dialogue stranglehold as a dragon flambees your buttocks. But there are random glitches too. A giant may break gravity when he punches you, for instance, nearly launching you into orbit. 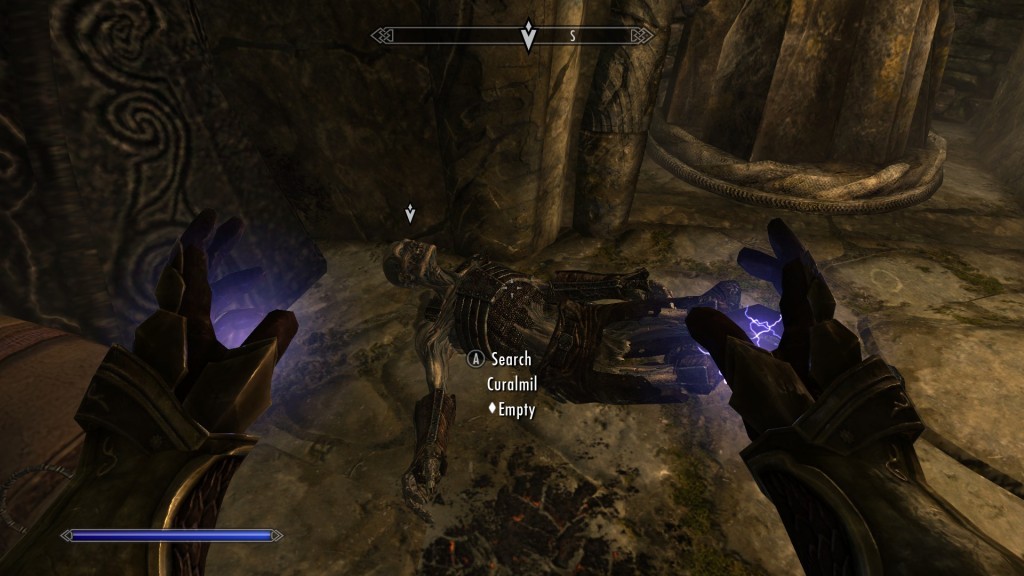 Even this long after release, there is still the odd sidequest ending bug. At some point I was sent out on a mission to kill an undead ghoul, whom I had unfortunately already run into and killed many hours earlier. The quest marker hovered over his head enticingly when I had made my way back to his already twice-dead corpse. But though the game had deemed him alive enough to start the quest, it did not apparently deem him alive enough to be killed again. I had to revert to an earlier save and skip the sidequest. 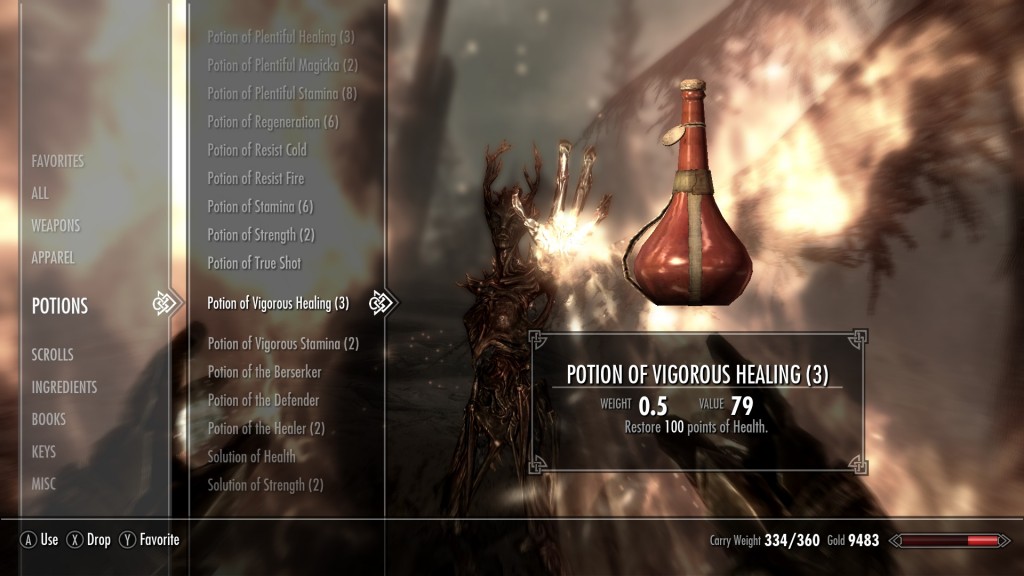 You will likely end up ignoring some aspects of the game no matter how you play it, as there is just too much to look into and not all of it is all that central to the game. You can make potions, enchant objects or refine weapons by smithing. But if all of these things seem like boring busiwork to you – like they did to me – you can also happily pretend none of it exists. Skyrim is basically a fantasy roleplaying simulator, allowing you to play around as you wish. If you are playing the PC version, Skyrim can go from just being a temporary time sink to a way of life. There are many, many ‘mods’ that enhance and/or break the game, more than any one gamer will likely ever want to experience. Graphical upgrades, new areas and quests, new special powers and a lot of random goofiness. 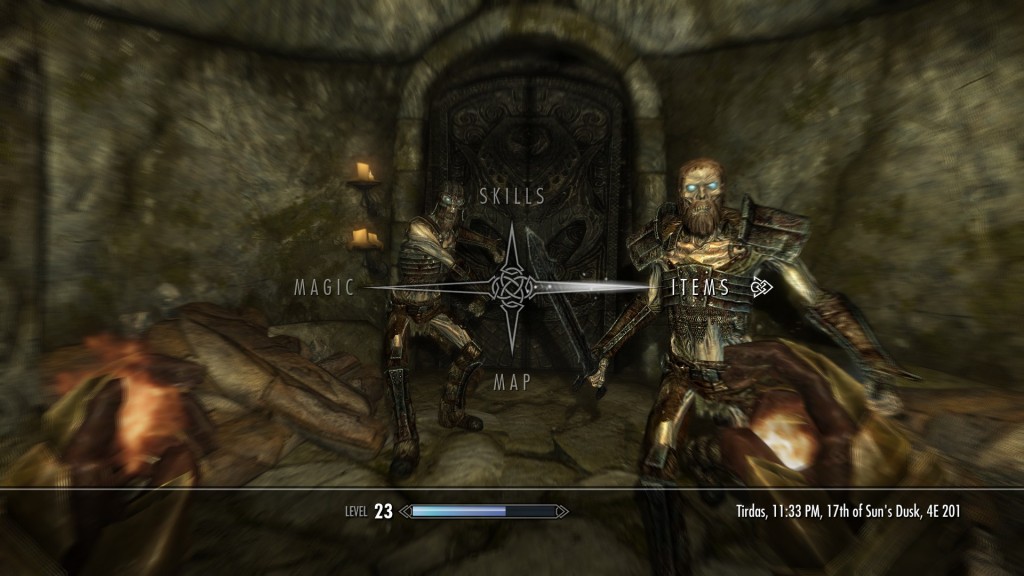 Skyrim is also a game of overkill when it comes to the options for fighting your way through the world. There are potions and scrolls and magic and regular weapons and enchanted weapons and powerful ‘shouts’. You juggle these through a slightly cumbersome menu that will ultimately lead you to repick a few favorites over and over again while ignoring the other options. People may have an entirely different experience based on the options they pick, but will miss out on a lot no matter how they play. 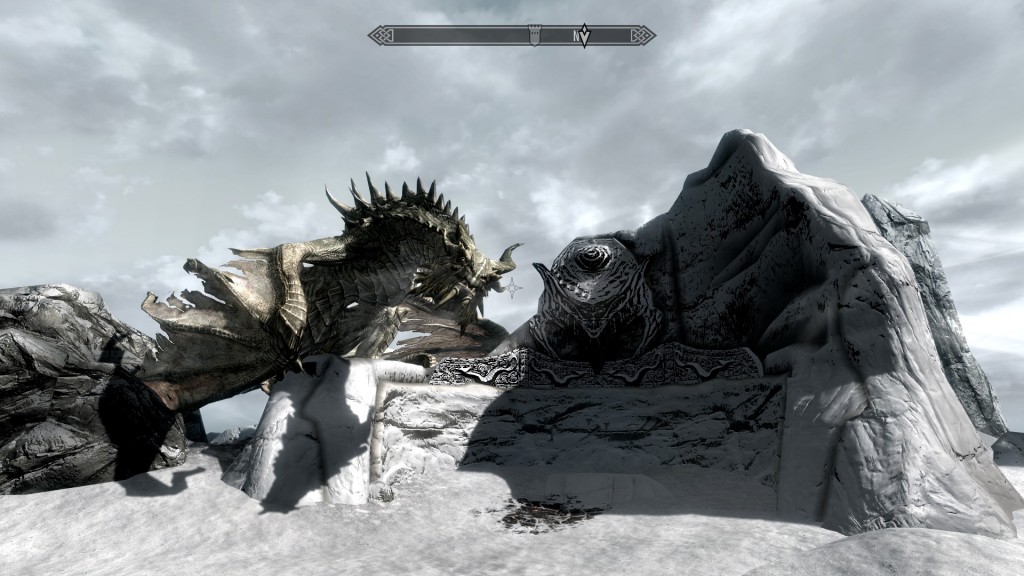 Skyrim loves to withhold closure, maybe in an effort to keep you caught in its web. At no point will you find end credits popping up within the world, you’ll have to head into the menu to see them. You have to be truly dedicated and singleminded to join all the factions, walk all the various paths the game presents to you and see all there is to see, but it will never feel like you have truly finished. Sure, the main campaign ends in a slightly tougher than usual fight, but once it is over and you have ‘fulfilled your destiny’, life in Skyrim just carries on as usual, deflating your achievement.

So I fabricated my own ending. I bought a house in Whiterun, fully furnished, adopted two bickering girls (No paperwork: ‘Hey orphan, wanna be my daughter?’ ‘Got a place? Then sure, dad!’) and gay-married the companion I had fairly randomly picked to fight along my side. His name was Onmund, a potato-faced Nordic mage from a place called Winterhold College. He showed no romantic interest in me initially, but then I wore a magic necklace that showed I was up for coupling and he agreed to marry me on the spot. Because that’s how Skyrim rolls. There were no deep conversations, no saucy cutscenes, just instant domestication. He started calling me ‘my love’, moved in and announced he was going to open up a shop while I was out adventuring. But I was done with all that. Even though there was plenty still to do, plenty to see and I hadn’t even started yet messing around with werewolves and vampires. I just stood there for a moment in my cosy home, amidst my handpicked family, with my demonic black eyes behind a creepy metal mask, in a slightly shamanistic outfit. And then I called it a life. Happily every after, I decided. Exit to desktop. 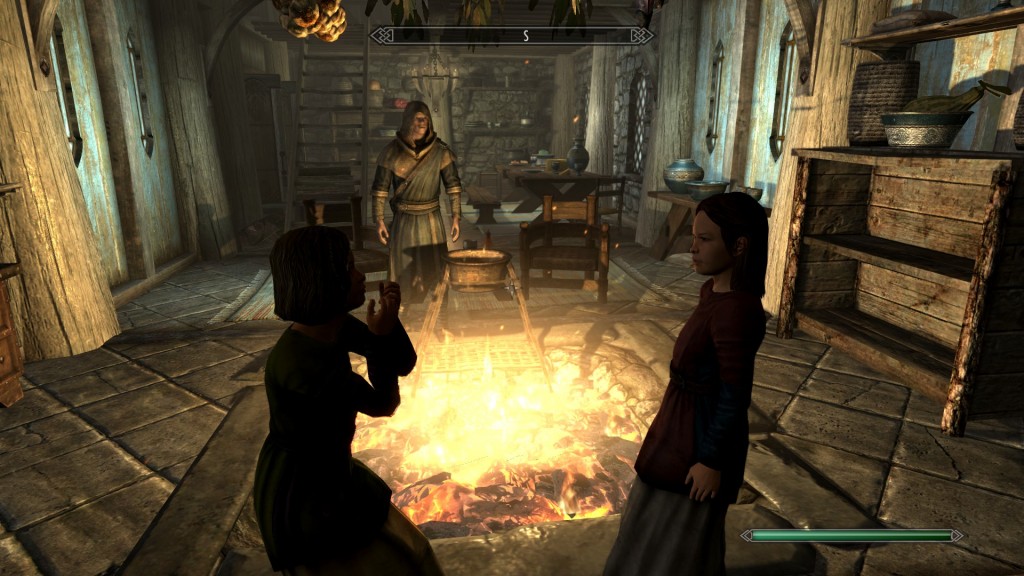