A lot was riding on The Wolf Among Us for developer Telltale Games. Telltale was already known for point-and-click adventures and interactive storytelling, but it only recently hit the critical and commercial motherload with The Walking Dead – Season 1. Would Telltale be able to replicate this success with a lesser-known franchise? Thankfully, the answer is ‘yes’. 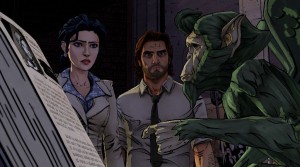 Your alter-ego in The Wolf Among Us is Bigby Wolf, formerly known as The Big Bad Wolf. He is trying to redeem himself as the Sheriff of Fabletown. Working with creepy interim mayor Ichabod Crane and his aide Snow White, it is Bigby’s job to maintain order among a wealth of downtrodden storybook characters who were banished from their realm and dumped into ours. A happily ever after evidently wasn’t in the cards for most of them, as they hustle to survive. The first episode starts off a noir murder mystery, fantastical but gritty.

The game looks like a graphic novel – more colourful than The Walking Dead, but drawn in a similar style – and it tells an engrossing story in five chapters. These chapters can be bought separately, which makes sense for Telltale as this allows for five release dates, more development time and five times the reviews. But players are really better off waiting for the full story to be available and then to play through the whole season in one or two sittings. With a month – or even two – in between the release of chapters, story-momentum is easily lost if you play the game piecemeal over half a year.

The gameplay is simple but satisfying and exactly the same as in The Walking Dead. You examine some environments and play through action sequences using quicktime events, but most importantly you make decisions which have consequences for how the story unfolds and have an effect on your relationship with other characters. These decisions mostly take the form a dialogue choices, a lot of which have a timer on them. How long you have to respond, depends on the situation. Generally you will not have time to overthink and will end up going with your gut, giving your ‘honest’ response to a situation. The sense of immediacy is very effective, making sure that you pay close attention and stay in the moment. I can imagine some issues if you are dyslectic and I did have one or two instances when I didn’t have enough time to process my response. But most often the choices are clear and don’t veer off into something unintended. You can restart each chapter at certain points if you feel that you messed something up. 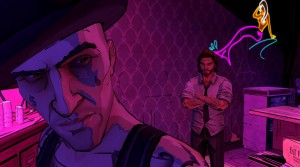 The Wolf Among Us didn’t only have high expectations to deal with, but also had a lot more scene-setting to do than The Walking Dead, as Fabletown comes with its own set of rules and with a – to a lot of players – unfamiliar history. Bigby knows the background of the characters around him and knows the lay of the land, but it may take you a little while to find your footing. One or two of the early instances where I had to pick a response left me scratching my head for lack of context. Thankfully, the game does provide you with information on characters as you encounter them, and reading these short texts is highly recommended.

The Wolf Among Us had less freedom with its ending than The Walking Dead, as The Wolf Among Us serves as a – cannonical – prequel to the comic book series Fables. This means that for all the variances in the story, everyone featured in the comic had to end up at a predetermined place. And there is at least one instance of a cliffhanger that will have much less impact if you have read the comics. 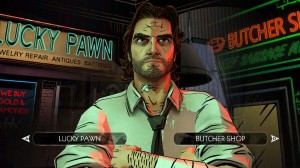 So, you can’t steer the story in entirely different directions, but you will make some life-or-death decisions about characters who presumably don’t play a role in the comics. What you do here is constrained roleplaying. You’re coloring scenes with your own personality, your idea of how you would act in certain fantastical circumstances. Or rather, how you would act in these circumstances if you were trying to redeem a dark past while nurturing a secret crush on your partner Snow White. Your relationship with the other characters may vary, despite a lot of situations playing out in mostly the same way. There is a fragile illusion of choice going on here and it’s tempting to do multiple replays to see what variances there are. But that would likely ruin the great feeling the first playthrough leaves you with, giving too much of a look behind the curtain.

Like The Walking Dead, The Wolf Among Us shows you what percentage of players made the same decisions as you at the end of each chapter. I was almost always part of a large majority, which makes you wonder how many players end up playing the story in almost the exact same way. The choices that hover around the 50% mark may be the most interesting, as they are presumably the most morally complex ones. 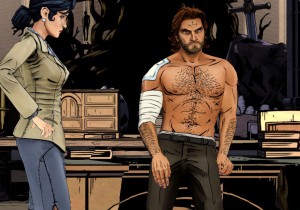 The Wolf Among Us manages to deeply immerse you in an intriguing story in an interesting world with characters you care about. You get to play your own part in it, even if your influence is ultimately limited. I have no idea if there will be a sequel and it doesn’t seem like there is a need for one, at least not with Bigby as the lead. Players will have decided who ‘their’ Bigby is by the end, so the writers would really have to shake things up to keep him a complex character to play. There is a recommendation at the end of the game to read Fables and I am indeed tempted to check it out. But it will be weird to no longer be in charge of Bigby’s responses.

Telltale is not resting on its laurels. The developers are currently finishing up the very good The Walking Dead – Season 2, as well as working on a game set in the world of Game of Thrones and one set in the world of the Borderlands franchise. Will this style of gameplay start to feel samey as you play more of them? Will it start to bother that you only have a limited effect on how the story plays out? (Because more freedom would likely make the writers’ heads explode, as it would lead to massively complex continuity.) Maybe it will. But if each ‘season’ manages to tell an appealing tale while drawing you in and allowing you to set the tone, the formula will keep from feeling stale for a good time to come.