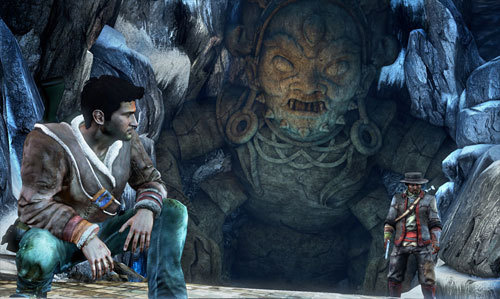 The Uncharted and Tomb Raider games owe a lot to each other and to Indiana Jones. With a small tweak to their back-story, Nathan Drake and Lara Croft could easily be revealed to be Dr. Jones’ grandchildren. They are ancient artifact-chasing adventurers who spend an inordinate amount of time climbing around giant rooms activating very complex mechanisms that somehow didn’t break down despite being inactive for centuries. Why be straightforward when you can put together cryptic clues and have the time and budget to get dramatic about it? Some of these previously sealed rooms even feature mysteriously lit fires that seemingly have been burning forever. These must hold the secret to an unlimited energy source that could save our world, but our heroes don’t ponder such details. It’s also a wonder that the ruins these contraptions are found in, have always declined to the point that there is only one single, precarious path to get to the target. 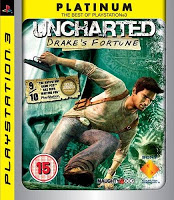 In any case, having just finished Lara Croft’s latest adventure, I decided to give the Uncharted series a try. While playing Uncharted: Drake’s Fortune (2007) I was reminded a lot of the two Tomb Raider games from around the same time: Legend (2006) and Underworld (2008). The climbing around feels near-identical, including things like ridges that crumble as you cling to them and vines or chains that allow you to run along a wall to the next ridge. But Uncharted is a lot more gun-happy, constantly throwing you into arenas littered with convenient places to take cover, where you shoot at generic baddies. They come in orderly, highly predictable waves. Honestly, I got bored with the shooting and just wanted to get to the next bit. I am not sure if this is the game’s fault or an accumulative effect of playing too many shooters. The story is like that from an old adventure movie and the characters are interesting, but not fully fleshed out yet. There are plot holes, like characters turning up in places they couldn’t logically have reached. And Nathan leaves a buddy in dire straits at some point, without a second thought. The friend miraculously escapes, but it’s never made clear how he managed it.
The climbing around can be awkward in that it’s often not clear which parts of the scenery you can actually climb. This means you will sometimes find yourself oddly humping a wall or hurling yourself to your death. As in the Tomb Raider games, the camera often tries to be cinematic by going to a wide angle that may prevent you from seeing where you’re going. 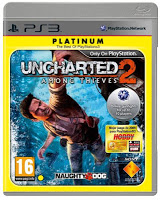 Uncharted 2: Honor Among Thieves (2009) takes the formula from the first game and improves on it. The graphics are more polished and pacing is better. It switches between platforming, puzzles and shooting constantly and smoothly, while making sure there is enough variation to each section to make it different from previous ones. The dialogue is less wooden than in the first installment, even though the comedic timing can be off on occasion. Hearing Nathan say a funny one-liner just after snapping someone’s neck, makes him come across like a dangerous sociopath. And I guess he is indeed dangerous, leaving a massive pile of bodies in his wake. But then, these guys were all trying to kill him, so turnabout is fair play.
The game has imperfections. There’s a weird gleam to people’s eyes that makes them look like cyborgs. Jumps you can barely make, show you getting pulled towards walls the last inch, like they possess their own gravity field. There’s an impatient Hint system, that all but goes ‘Hey, stoopid – do THIS!’ when you dally for a moment. The way you always get handed the weapon you need at the exact moment you need it, becomes a bit obvious. The final Boss fight is a tedious slog. There’s a frustrating ‘run for your life’ section where the camera angles backwards in a way that is very cinematic but doesn’t let you see where you’re supposed to be going. And I can’t quite reconstruct the cause-and-effect of how the hero actually saved the day in the climactic scenes.
Finally (kept vague to avoid spoilers): if you had the key to a door that the Bad Guy should not be allowed to open, would you: a. try to beat him to his end goal, possibly leading him there in the process or b. simply destroy the key, ensuring that the door could never be opened? If you picked ‘a’ – congratulations – you could be a character in this game.
But Uncharted 2 is like a great roller coaster ride. Whether you find yourself in a collapsing building, climbing all over the longest train in human history,  taking down a helicopter, having a gunfight while hanging from a street sign or improbably reconnecting with your ex-girlfriend, you’ll have a very good time. On to Uncharted 3!