William “B.J.” Blazkowicz has a gigle-worthy nickname, but is dead serious about killing Nazis. There are a lot of those around, as in the alternate history that he lives in, the Nazis won the war and have achieved global domination. After spending years in a vegetative state due to a brain injury, B.J. makes an impressive comeback and has to relaunch the resistance. The muscled, blond and blue-eyed Übermensch is – ironically – humanity’s last hope against the Nazi menace.

Wolfenstein – The New Order puts a suprising amount of effort into its story and characters for what could have easily been a braindead shooter. Never mind the logic or probability of the overall plot, but the game’s roster of heroes and villains is pretty memorable, even if the overall silliness keeps you from getting too invested. For instance, what to think of B.J. after a decade of being immobile suddenly leaping back into action as strong and near-bulletproof as ever, his brain suddenly all good again. But the likeability of the cast makes you forgive a lot of the inconsistensies. When a – going by all logic – presumed dead character pops up again, you are happy to see him, even if it makes no sense. There is also a romance placed at the core of the story that mostly works, despite it feeling a little rushed. 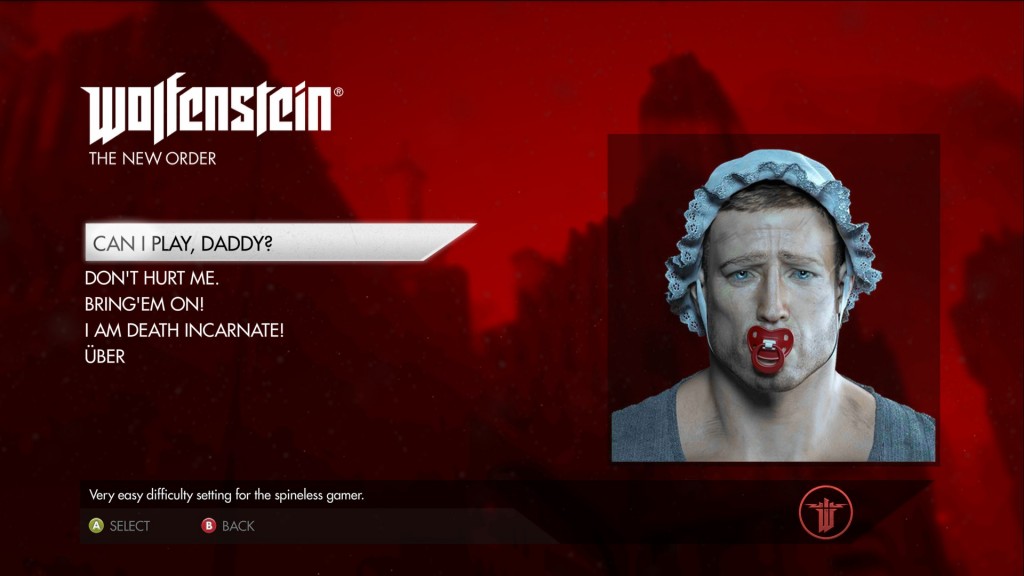 The game gets away with a lot when it comes to tone. It doesn’t just manage to make you connect with the cast despite the silly story. It also combines a bloody and grim tone – there is a level at a concentration camp – with selfaware goofy moments. Such as when, at the end of a mission, B.J. mutters to himself: “Nazis dead. Nazi robot dead. Broke all your shit. Helicopter secured.” The silliness extends into the game menu, where the easiest setting comes with a pacifier and you’re asked if you really want to be a quitter when you exit to desktop. These winks and nods are in the spirit of earlier Wolfenstein games, where the franchise kept its tongue in its cheek more. (The original ended with you fighting Mecha-Hitler.) The New Order stays relatively grounded, focusing on technology rather than the occult, which was its focus in the previous games. Your main opponents are soldiers, big robots and the occasional robot dog. 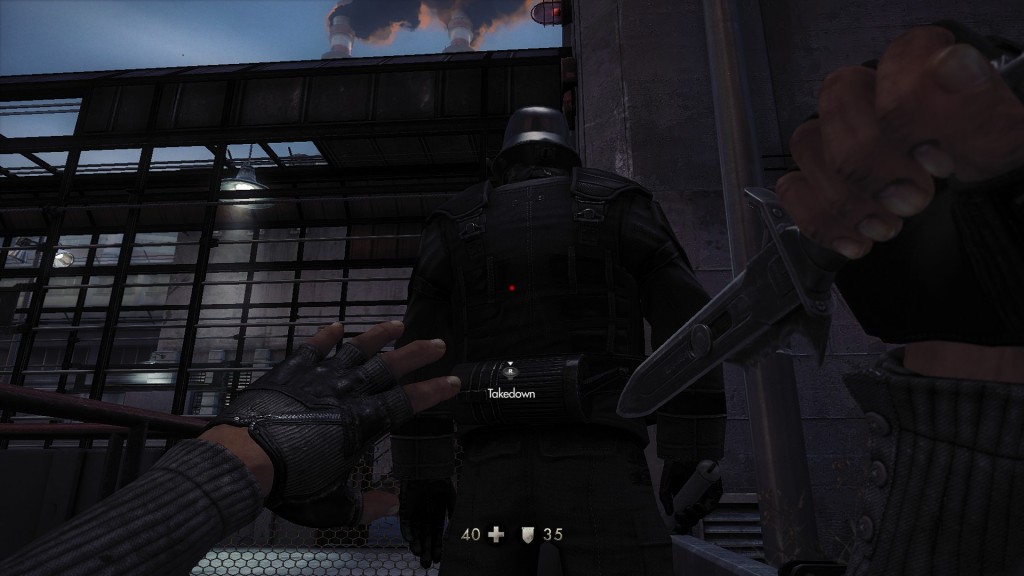 Like a lot of modern shooters, The New Order gives you various options to reach your objectives. You can go in guns blazing, snipe from afar or try to be stealthy. This last option especially is a bit undercooked however. Unlike in most stealth games, there is no radar to show you who walks where and there are no vision cones to show you in what direction they are looking. You can peek out to try to spot enemies before they spot you, but this is far from an exact science. Especially in larger areas, it tends to be only a matter of time before things degenerate into a hail of bullets. 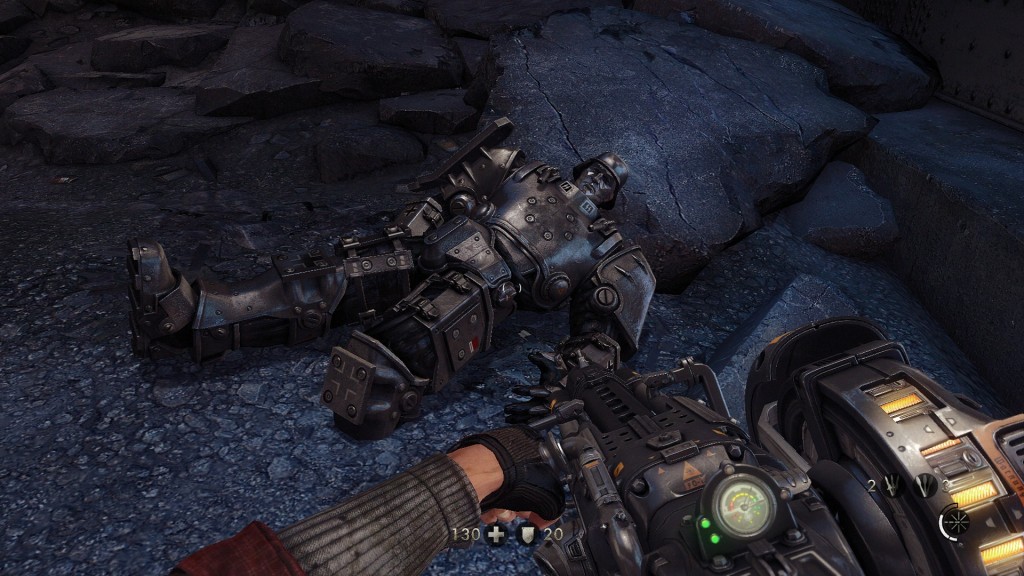 The shooting is fun and at times challenging on the default setting. There is some strategy involved and you will want to take out specific targets first who can set off an alarm and call for reinforcements. Once those show up you will likely be overwhelmed. Your limited options to be sneaky can be a stumbling block however. The trial and error way of advancing can get a bit annoying and repeatedly dying takes away from the immersion. The trial and error also extends to the couple of Boss fights in the game. Especially the final Boss is a pain in the ass, a bullet sponge who requires as much luck as he does strategy to take down. An earlier Boss requires mostly patience as you take it apart, followed by a risky final manoeuver. Failing and having to do the whittling down bit again can try your patience. I did like a semi-boss fight that at first glance seems too hard and unavoidable but that you can actually skip by sliding under a halfway opened door. The tough fight is there for die-hards, but not obligatory.

One decidedly old-school thing the game does is make you pick up ammo, armor and health by clicking a button when you come across it. This makes some sense for the latter two, as you may want to wait with picking them up to optimally benefit. But as you will always want to pick up all the ammo right away – there is no downside to doing so – it’s strange that you’re required to go through the fuss of standing in the right place and clicking to pick it up. 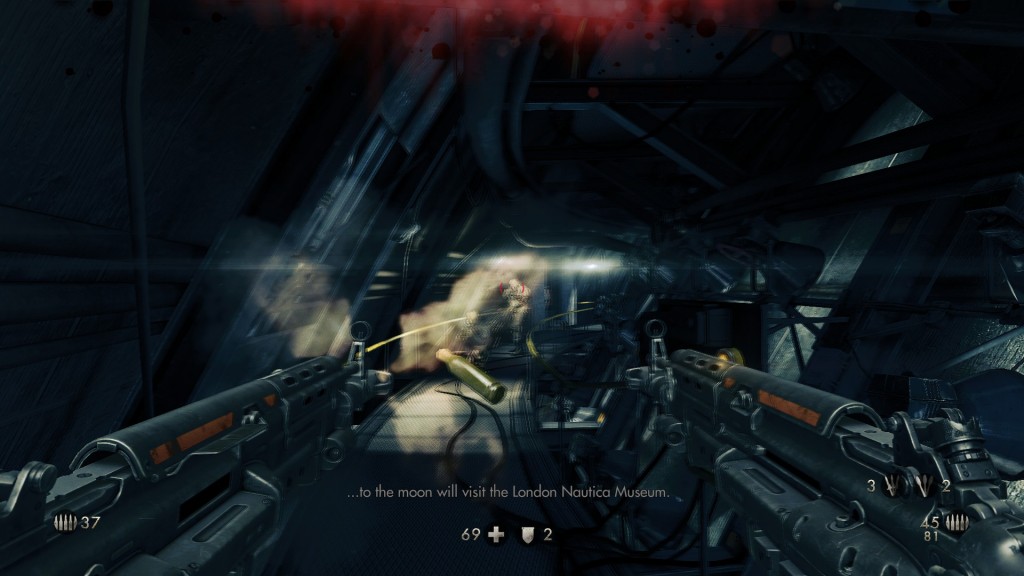 The game gives you upgrades depending on your achievements. (Do a certain amount of stealth kills and you get a stealth perk, and so on.) It’s a nice and organic way of doing things. Even if you are not actively pursuing the needed achievements, ‘your’ B.J. will evolve according to the way you play. Also influencing your game is a story choice made early in the game. The change is relatively minor to be honest, one giving you armor upgrades while the other gives you health upgrades and both alternate realities open up some minor different paths. Two characters in your story will be swapped out with other characters to no great effect. Still, it’s nice for people who want to play the game twice and the fact that you are forced to make this life-or-death choice makes you feel a bit responsible for what happens next. 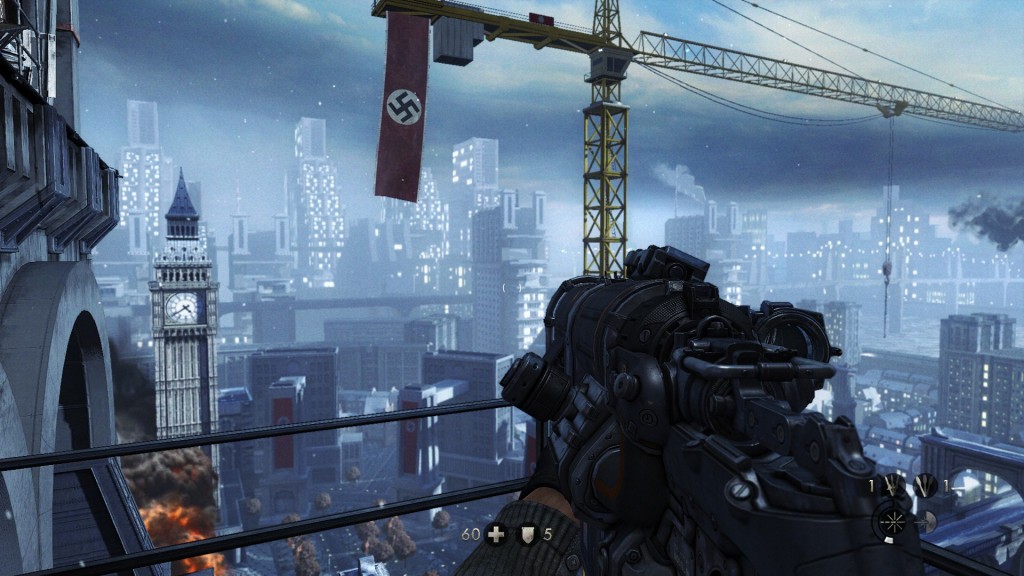 The Nazi threat doesn’t quite get wiped off the globe and the world is still in deep doo-doo when the credits role. A new villain has been set up for the seemingly inevitable sequel. Hopefully they will maintain the right balance of grim and goofy and either refine or ditch the stealth. That you’re actually interested in what will happen next, is a sign that they got their storytelling right in any case.