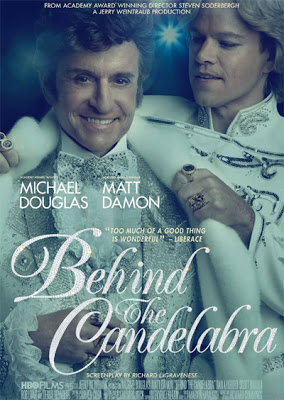 Behind the Candelabra is a biopic about Liberace, a diva who spent his life lingering in the glass closet, at a time when that term did not exist yet. He was a piano-playing showman, into kitsch and glittery things to an almost pathological degree. Despite being flamingly gay to the point where satellites orbiting Earth would nudge each other and go ‘You think he’s…?’ ‘Well, DUH.’ he somehow managed to slip under the radar of grandmothers everywhere. His public image was that of the ideal son-in-law.
Liberace had flings with various younger, twinky guys over the course of his life and this HBO movie tells the story of perhaps the most significant one: his six-year relationship with Scott Thorson. (It is based on an autobiographical novel written by Thorson.) For a television production, Behind the Candelabra is heavy on stars: Michael Douglas plays Liberace, Matt Damon plays Thorson and if you look behind various forms of dubious facial hair and/or make-up, you may recognize Scott Bakula, Dan Akroyd, Paul Reiser and Rob Lowe. In a production that features a lot of creepy-looking characters, Lowe edges out the competition as a cosmetic surgeon whose skin is pulled back so tight that his eyes have turned into cat-like slits. Gay-fave Debbie Reynolds puts in an appearance as Liberace’s mother. The director also comes with a pedigree: Steven Soderbergh. He has made a fair amount of great movies like Ocean’s Eleven and Traffic and has had a few misfires, like Ocean’s Twelve and Thirteen.
Given the star-power behind and in front of the camera, Behind the Candelabra is unexpectedly subdued. When Liberace is on stage, there is spectacle. When he is off it, there are strange-looking and not all that sympathetic people having mundane conversations in gaudy surroundings. Matt Damon’s face looks oddly shiny in the beginning – presumably an attempt make him look young – and looks just odd after he gets cosmetic surgery later in the story. His stomach also draws the attention: it goes from flat to belly and back again, not very convincingly, by Damon temporarily wearing something pillow-like under his shirt. Michael Douglas is bravely unattractive as Liberace. On stage he looks like a doll and off it – especially when the wig comes off – he just looks fragile and old.
Interestingly, this HBO movie doesn’t castrate Liberace, as popular culture tends to do with gay men, especially the more effeminate and older ones. He is a horndog and we do get to see Michael Douglas en Matt Damon kiss, simulate anal sex and have a discussion about who gets to top and who gets to bottom. All of this is refreshing to see, but it also left me feeling a bit queasy. This isn’t a sweet, romantic story. Liberace and Thorson were definitely using each other, even if there was some real affection. The movie is non-committal about the amount of love versus cold self-interest, but as romances and relationships go, it was a bit of a car-crash, with a fair amount of sex, drugs and piano-music.
Behind the Candelabra is an interesting oddity, definitely worth checking out. But in the end it feels a bit flat. Like Liberace’s stage persona, it’s about the surface and it does not really engage emotionally.