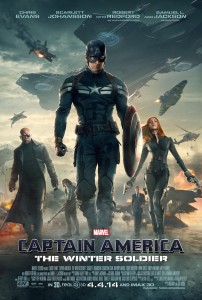 Like Superman, Captain America is a tricky character to make interesting. As conceived, they both stand for moral absolutes. In Cap’s case, for ‘truth, justice and the American Way’ though thankfully, that last part isn’t overly emphasized. The second (semi) solo movie handles Cap very well, throwing the ultimate Good Guy into a conspiracy thriller and making him have to doubt the morals of everyone around him. It is also pretty current, tackling the topic of safety versus freedom. How much are we willing to give up of the latter to gain more of the former?

I won’t get into the plot much, for fear of spoilers. Let’s just say that Black Widow kicks a lot of ass, Robert Redford does the same with his acting and that Samuel L. Jackson has a very good action sequence. Cap’s shield is used in a variety of cool ways and Chris Evans makes Cap a likeable guy you root for every step of the way. There is also the introduction of a new superpowered character or two, one of whom looks a bit silly in action. While most of the heroes and villains here rely on hand-to-hand combat or guns, the outlier seems to belong in X-Men, rather than in this relatively grounded outing for Captain America. 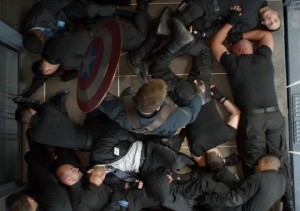 Maybe my use of the word ‘grounded’ is unfortunate, given the climatic scenes. They are visually impressive, especially on a big screen in 3D, but things do get a bit convoluted and messy. There is silly pseudo-science at work in them – or rather pseudo-technology in the shape of three doohickeys – and the heroes’ strategy for the endgame ends up relying on quite a bit of luck. Also, it’s funny that Evil technology has red lights which turn green when Good people hack it. Who knew morals were colorcoded into hardware? Evil is ‘no’, Good means ‘go’!

Two more nit-picks. As in other stand-alone movies from the Avengers crew, it’s not clear why the rest of them aren’t called in to help. And what kind of glass is in all the windows in this movie? You could base a drinking game on the amount of people throwing themselves out of a building by effortlessly crashing through one. Even if these buildings are otherwise heavily secured, the windows shatter right away. I would have loved to see at least one instance of a character bouncing back off a window and onto his ass.

Nitpicks aside, this is one of the best Marvel movies, only slightly below The Avengers and on par with Iron Man 3. Up next is Guardians of the Galaxy, full of characters I’ve never heard of, but blessed with a great trailer. Bring it!