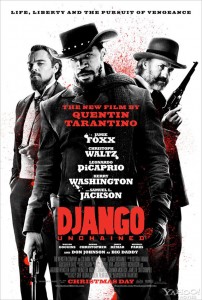 The N-word. Should white people be able to use it or not? Of course, it’s all about who is using it and why. If I call a gay friend a ‘fag’, being of that persuasion myself, it’s not a big deal, but if someone yells ‘fag’ at me on the street, it carries a lot more negative weight. Here, it’s Quentin Tarantino using the n-word in his script (a lot), a very white guy who oh-so-desperately wants to be a black badass. For the first two-thirds or so of Django Unchained, the use of the phrase seems appropriate. The story is set in the time of slavery and to pretend it wasn’t used, would be warping history for the sake of current-day political correctness. It’s when the movie makes a turn into seventies-style blaxploitation revenge territory that use of the term gets a bit more dubious, even if you feel numb to it by that point. Framed by a serious movie it seems fine, framed by over-the-top trashiness, it seems a bit of a cheap shot, like someone is trying too hard to be all cool an’ street an’ shit.

One of the tricks to being cool is not trying too hard to be cool. Tarantino is at his best (in my humble opinion) when he reins in the schlock and just focuses on subtle cinematography and storytelling. He is great at building scenes and writing tense but funny dialogues.  Here he spends a long time setting up something interesting but then seems to think ‘Ah, f*ck it! Let’s throw some rap on the soundtrack and splash literally unbelievable amounts of cartoonishly fake blood everywhere.’ It does add to the title, as Django is not just set free but also cuts loose. But I rolled my eyes at the jarring shift in tone. I realize that it was an intentional break, but wonder why it was necessary. It seems a bit lazy, going for something obvious, visceral and crowd-pleasing, rather than something smart. 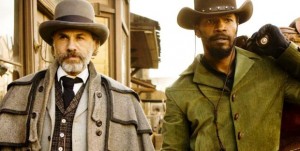 Christopher Waltz as Dr. King Schultz is the best thing about this movie, stealing every scene he is in, much like he did in Tarantino’s Inglourious Bastards. He is a bounty-hunter who frees Jamie Foxx’s Django and promises to help him free the woman he loves too. The cat-and-mouse game Waltz plays with Leonardo DiCaprio – who plays a plantation owner – keeps you on the edge of your seat. The other two performances of note are by Foxx and by a barely recognizable Samuel L. Jackson as a traitor to his own race. I guess if these actors had no problem with the use of the n-word throughout, it would be a bit precious of me to disapprove on their behalf.

While I like some of Tarantino’s over-the-top movies (Kill Bill 1 & 2, for instance), I would love to see a movie again where he holds the same semi-serious tone from beginning to end. And to make the challenge even greater, maybe even one that skips revenge as a plot point entirely. It would be really cool if he would be less obvious about his desire to be cool. 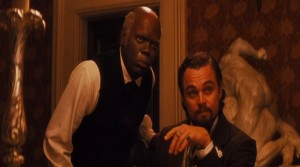