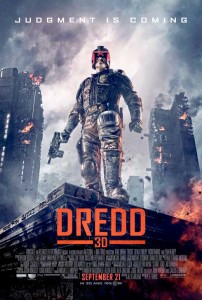 Dredd is a well-executed, lean and mean sci-fi action movie. It is based on a series of grungy underground comics (from 2000 AD) and is far more true to the source material than the Sylvester Stallone flick from 1995 was (titled Judge Dredd). In a crime-riddled, post-apocalyptic city, a new force for Justice has arisen. The law is carried out by an equivalent of cops called Judges, who have the right to pass sentence and carry out punishment on the spot, even if that punishment is the death penalty. The legendary Judge Dredd gets trapped in a high-rise, while taking along a mindreading recruit on her first day. Together with the rookie, he has to take on a drug cartel led by the Evil Ma-Ma. Dredd has to battle his way to the top of the 200-story building and take her out. 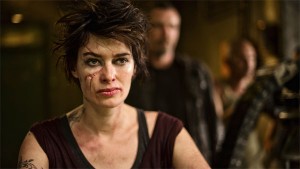 And that’s the story, really. The movie features a lot of battle scenes, and collateral damage, innocent bystanders dropping left and right. They don’t have especially good duck-and-cover instincts, sometimes oddly exposing themselves to gunfire. The violence is presented as gory art on occasion, when time is slowed down to simulate the effect of a drug called Slo-Mo. The two heroes are interesting and worth rooting for, the new recruit being our point of entry into this world. The running time is a tight 95 minutes, with barely any flab. Karl Urban as Judge Dredd has dialogue that is simple but effective and he manages to convey an intriguing character despite most of his face being covered by a helmet for the duration of the film. Ma-Ma is an adversary worth hissing at, played with creepy detachment by Game of Thrones’ Lena Headey, who seems to enjoy playing characters people love to hate. 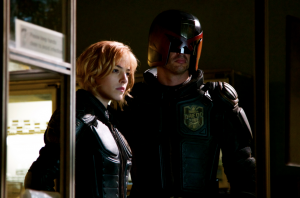 The movie was not a big box-office success, but seems to be a sleeper hit on DVD/Blu-Ray and streaming media, so the potential for a sequel is unclear. Dredd does have an obvious moral quandary it doesn’t really address. By not giving themselves up to Ma-Ma, the Judges are indirectly causing a lot of innocents to be killed. Are they culpable for these deaths? Discuss. And judge.