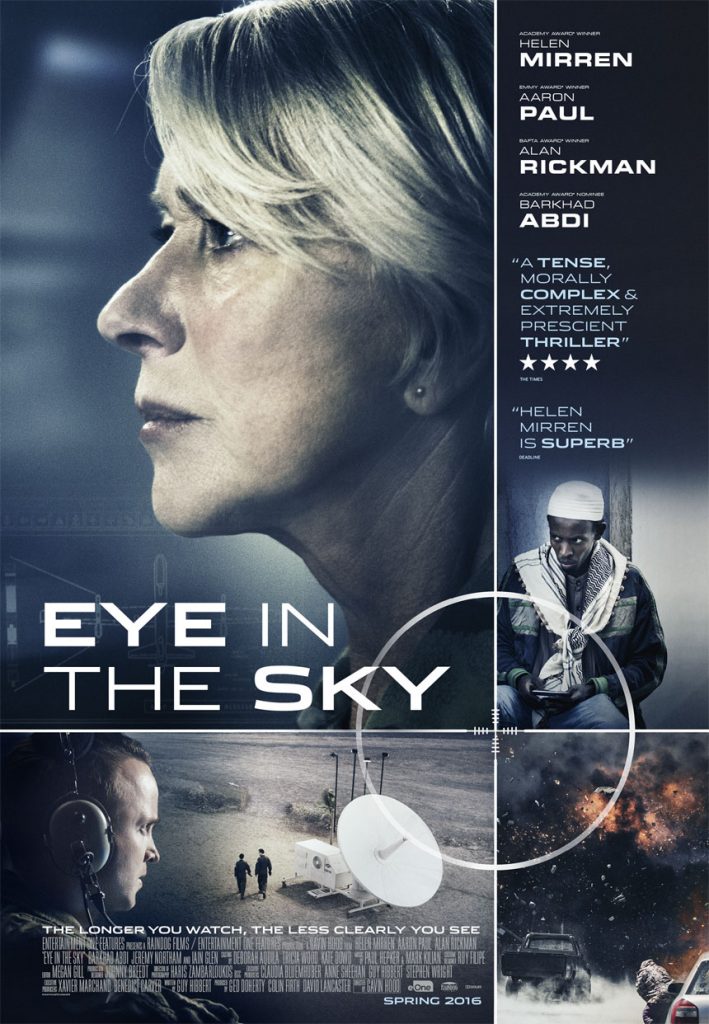 Eye in the Sky is a tense thriller with a moral dilemma at its core: is it okay to sacrifice a few innocent people if you know that this decision will save a larger amount of innocents further down the line? What may seem like a simple math problem – the best option is where the most innocents are saved – becomes more complex when you can see the faces of the people you will be killing in the name of the greater good. And decisions in the real world are rarely so clear-cut. Is there really no other option? Can the loss of life be minimized or even avoided entirely?

The situation is this. Some known terrorists have been followed to a house and are being observed by a drone. This drone is armed and ready to take them out with a rocket. Odds of there being civilian casualties are calculated and discussed as the time for a decision starts to run out. The situation on the ground shifts in small but meaningful ways. One particular child’s life hangs in the balance, a sweet and bright girl with loving parents. Taking out the terrorists will prevent a multitude of deaths, but who can morally shoulder the potentially high cost of stopping them?

The behind-the-scenes decision for the drone strike gets passed around like a hot potato. The military ultimately has to have the okay from the politicians, who all claim that someone else has the official authority. The panicked back and forth between them all feels at times farcical, but believable. Those furthest away from the situation see it as a math problem. Most of those closest to it become paralysed because they consider themselves good people, but there will be innocent blood on their hands, no matter what happens. The after-effects of a possible strike also have to be considered. Collateral damage will give the enemy ammunition for their propaganda, but letting the terrorists go will result in bombings that would possibly unite everyone against the enemy.

Helen Mirren is predictably great as the Colonel who is leading the drone operation and pushing for a strike, while Alan Rickman also gives a strong performance as a Lieutenant General who has to wrangle a decision out of the various politicians. It was Rickman’s final role – he passed away in January – but at least it is a memorable one. Then again, there are no real weak links in the cast. Faisa Hassan impresses as the operative on the ground and Aisha Takow effortlessly charms as the girl whose life hangs in the balance. That you are instantly invested in keeping her alive – at all cost (?) – is what makes the movie tense from beginning to end.

If the film does have a weakness, it lies with two smaller drones that are used, which are made to look like a beetle and a bird. I don’t know if these could realistically exist already, but they feel too SciFi, bringing an odd, tone-breaking touch of James Bond to the film.

Eye in the Sky doesn’t end up being either pro drone strikes or against drone strikes. It is about facing a morally impossible decision. You can only hope that in the real world, any operation like this is weighed as extensively as happens here. But no matter what the final result is, a lot of people are likely to end up living with some very nasty consequences. Assuming they survive.