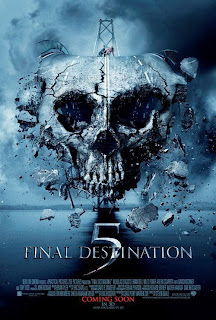 Franchise plot summary: a big accident causes a load of people to die. A teenager has a vision beforehand and manages to save a small group of the future victims. An unseen force then proceeds to restore order by offing these people in a series of creative freak accidents. Rinse, lather, drown, repeat.

It’s not exactly a cheery thought, but the moment we are conceived, our death becomes inevitable. Whether you believe your fate has already been decided for you or you feel like you are in full control of it, your demise is at an unknown point in the future, drawing ever nearer, the form in which it will come unclear. A ‘natural’ death at a ripe old age is what we generally hope for: gently drifting away in our sleep, perhaps, with no Freddy Krueger in sight. But there is always the nagging fear we may be taken out of the game prematurely: an accident or a medical condition suddenly dragging us down and laying waste to our plans for the future. The Final Destination franchise plays on that fear, at least on the more sensational ‘accident’ part of it.

The killer in these movies is creepier than any number of slightly supernatural movie psycho’s with a pointy weapon and an antisocial attitude. There is no corporeal evil and no clear purpose, just an unstoppable force that wants you gone. Call it Fate, Destiny or simply Death – it’s ultimately an amorphous personification of our mortality. In this most basic of terms, the concept behind Final Destination is genius. It takes all the fatal freak accidents you ever heard of and makes you wonder if there wasn’t some kind of ingenious domino effect preceding it. And in a lot of cases, there likely was: cause and effect multiplied by the passing of time can take one cause which leads to a totally unforeseen and apparently unconnected effect down the road (Also see: The Butterfly Effect). Everything seems predestined when looking backwards, tracing back to a cause, though there’s more likely to be a complex network of causes, each with their own causes and so on until the dawn of time. Of course, the domino effect in real life tends to be a lot less sensational than the instances portrayed in Final Destination: a marriage slowly turned sour may lead to a fight in a car, which in turn may lead to a moment of carelessness at a traffic light, a crash and a dead biker who just ended up in the wrong place, at the wrong time.

Final Destination gets a bit silly when it tries to detail Fate’s process. There is apparently a very intricate plan for all of us, which gets upset when random teenagers have visions of their impending demise and manage to save a bunch of people. Who is giving the teens these visions? No one knows. Maybe some other force is teasing and challenging Fate or the vision is part of the plan to begin with, something Fate does to amuse himself. Instead of giving all the unintended survivors of the calamity a massive coronary or brain hemorrhage to clean up quick, he starts to set up massively complicated webs of causality, taking out his victims one by one even if he has an opportunity to blow them all up together in the same room by – for instance – planting a gas leak in advance. Since Fate seems to be able to predict the future, offing more than one victim at a time should not be a problem. But Fate seems hell-bent on being unnecessarily creative, varying the way he kills and sometimes even setting up a red-herring set of circumstances, only to strike in a simpler way moments later, like he decided to throw an improv and is trying to keep spectators entertained. In other words: Fate is acting suspiciously much like a screenwriter. The creepiness of Fate as a killer is lessened in the couple of instances where the screenwriter/Fate cheats and gets hand-on with the disaster in the making: visibly turning a screw loose or otherwise interacting directly with the world. He is at his best when totally invisible.

Going by the franchise, Fate seems to be hung up on the original order in which people were intended to die, replicating the order on his second try. It’s a neat way to set up tension in the scripts, but doesn’t make much sense when you think about it in terms of causality, where the original order of dying would be less important to the Grand Scheme than the amount of disturbance any specific survivor was causing. For instance: you’d think Fate would take out that pesky person who was having the visions first. It makes sense that the characters in Final Destination try to figure out the method behind’s Fate’s blood thirst and that they try to make sense of it all is also necessary for the movies to be more than just a string of roundabout executions, even though that is the bloody meat of the story. But Fate always ends up on top and the characters six feet under, like we ourselves will all face death one day and ultimately, inevitably lose.

The Final Destination series may make you a bit paranoid after watching an installment, wondering if mopping up that drink you just spilt will somehow end up killing you. It will also make you ponder death in a morbid way: what is the worst way to go? Getting burnt, eviscerated, decapitated, skewered, crushed, choked, drowned, blown up, run over or ripped apart? The terminating force in Final Destination doesn’t care if you have been naughty or nice, which also seems to be true enough in real life. The amount of pain with which someone checks out doesn’t correlate to their karma: someone who has never done anything wrong may slowly get roasted to death, while a real bastard may get off easy by getting quickly splattered by some kind of blunt force. Bloodiness may be the most disturbing factor visually, but the time it takes to die ultimately decides the amount of suffering for the person checking out. Death is less scary than dying and if you’re going to check out, you may as well do it on the fast track. By the time you’re in your eighties, would you want to start going slowly senile, feeling yourself slipping away or prefer to suddenly keel over from a heart attack? Personally, I am hoping for a gigantic glitter ball to fatally hit me over the head during disco night at the old folks’ home. At least that should give people something to smile about. 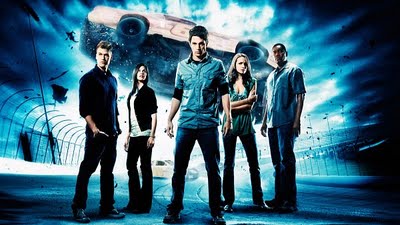