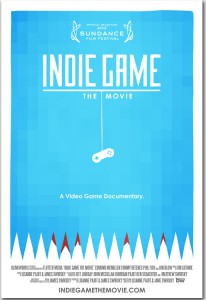 Indie Game: The Movie gave me second-hand stress. That is what happens when you see a few very smart, extremely driven and perhaps socially somewhat awkward people, bravely pour years of their life into fragile dreams. Failure would be more than a financial disaster, it would be an implosion of the ego. Taking the edge off the tension somewhat is that the projects discussed here (Braid, Super Meat Boy and Fez) all had already gone on to become a success by the time this documentary was released. But watching these people ultimately succeed, you realize that there are thousands of other hopeful indie-developers all over the world quietly failing despite making an equal emotional (and maybe financial) investment. And even if the featured developers came out on top, it seems the battle to get there took a lot out of them.

Braid‘s creator Jonathan Blow – soft-spoken, cerebral and a bit aloof – seems to have had it the easiest, but then that may be because the documentary was filmed after the game’s release. We don’t witness the struggles pre-launch first-hand. But we do hear about a depressed period after launch, when despite the game being highly praised and a bestseller, he got lost in the comments people made about the game online. He felt people were not ‘getting’ it and experiencing the game more superficially than intended. I imagine it’s the disconnect of someone with a high-brow, high-culture mindset finding success with a generally low-brow, pop culture crowd. Still – ‘You’re enjoying it wrong.’ seems like a weird mindset. 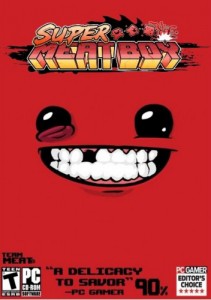 The Super Meat Boy duo – Edmund McMillen and Tommy Refenes – is an interesting pairing. Edmund comes across as a laid-back, imaginative, charming guy, easily the most likeable developer in the documentary. Tommy seems bitter, frustrated and angry, your stereotypical nerd angry at the world for not understanding him. But maybe this judgment is not entirely fair, as we see him at his most stressed right before the release, and Microsoft gives him reason to be angry. When he cracks a smile in the end, it finally shows there may be another side to him. 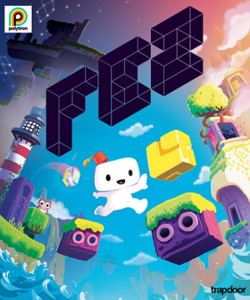 Fez‘s creator Phil Fish is also shown being put through the wringer. During development, he suffered through being dumped, a very sick parent and a nasty break with his business partner, all the while rebuilding his game over and over, battling the bugs plaguing it. Going by the documentary, he seems like a victim, but online he turns out to be a controversial figure. He apparently has a tendency to put his foot in his mouth. Not helping his reputation has been his decision to not patch the still somewhat buggy 360 version of Fez because Microsoft was asking for a ridiculous amount of money to allow him to. (Though he knew about this going in.) So you may want to pick the PC version.

As for the games produced here, all of them are worth your time and money. I’ve not yet finished any of them but played around in all three. Braid is a painterly-looking puzzle game that cracks your brain and tests your lateral thinking skills. Super Meat Boy has perfectly honed gameplay mechanics and a very cool visual style, which I can appreciate despite not being the kind of hardcore gamer SMB is squarely aimed at. Fez is a puzzle-platformer set in a beautifully retro 8-bit world that you can spin around, changing your perspective and your options to navigate it.

If you have any kind of interest in gaming beyond just playing games, check out this well-shot documentary. It is suspenseful even if you already know how things ended up and it does a good job of sketching the trials and tribulations of getting an indie game made. Whether it will make you want to give it a go yourself or have you run away screaming, will depend on how much you like a challenge. Indie Game: The Movie is available through Steam and frequently gets discounted as part of various sales.