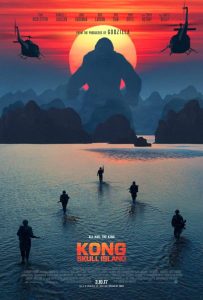 Kong – Skull Island is a pleasing package that gives people who enjoy this kind of film exactly what they want to see. Witness King Kong fighting helicopters as well as big monsters and witness him lifting up a puny woman in his massive hand. The overall feeling is of something lovingly calculated. They ran the numbers on some classic monster movies, cross-referenced those with data from successful recent blockbusters and then handed the report to someone with an affection for the material, with instructions to optimize.

The none-too-subtle dialogues and not quite on-the-mark comic relief are just about sufficient for this sort of thing. There is a large cast of humans to be manhandled and killed in a variety of ways by either Kong or some of the other creatures inhabiting the titular Skull Island. Overall it is fairly easy to predict who will die and who won’t – if you have a moral blemish and/or a corporate background, karma tends to be a bitch – but there are one or two surprises to keep you on your toes.

Considering the large cast and limited screen time most of the characters get, the script does a good job of making the majority of them distinct enough to remember and to even mildly care if they end up getting eaten, or impaled or otherwise meet a horrible end. The visuals and action set-pieces are the main event here, and the script skillfully manages to incorporate creative spins on most of the Kong must-haves, most notably lacking the iconic skyscraper moment. 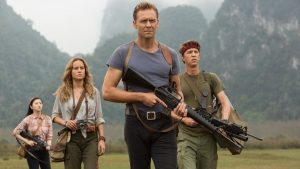 For all Kong’s brute strength and imposing stature, he is surprisingly perceptive. He is very good at gauging the intent of the various teensy humans he keeps running into over the course of the film. Admittedly, when he is getting shot at by some, it doesn’t take much effort to figure out their attitude. But there are more subtle moments where he is very good at reading body language and telling apart the good people from the bad people in confusing circumstances. The special affection he feels for intrepid photographer Mason Weaver (Brie Larson) seems to have no other logical basis than adherence to Hollywood history.

Be sure to stick around during the end credits for a sequence that indicates where a sequel may go. The intent of the makers does not seem to be to reboot King Kong in particular, but to keep paying homage to old monster movies in general.