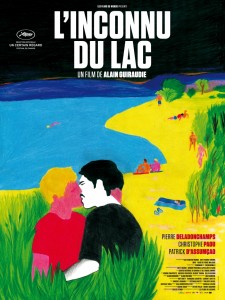 L’Inconnu du Lac is slow, repetitive and features a protagonist who fails to grasp the basics of self-preservation. I went to see it because it scored fairly high on the IMDB, and apparently my negative viewing experience is the minority one. The movie tells the story of Franck, a guy who spends a summer holiday hanging around a lake that is right next to a forest, which is used for cruising by locals. Most of the men lie around naked on their towel, next to the water, not doing much apart from eyeing each other curiously and occasionally saying hello. The nakedness is unabashed and matter-of-fact, not especially erotic. The men are just average guys. On some of the days pictured, it seems a bit nippy and windy, making it seem odd that people would get naked. Maybe it was intended to always look hot, but then the weather didn’t cooperate when the movie was shot. The cruisy microcosm ends up looking boring and slightly uncomfortable, rather than enticing.

When the aforementioned Franck spots a hot newcomer one day, he decides to follow through on his lust for the guy, even though he sees him do something for which the phrase ‘Red Flag’ falls short. But then, Franck turns out to be the King of bad decision-making. Barebacking with this complete stranger isn’t even the worst of it.

This movie will test your patience. There are way too many shots of Franck parking his car, meant to denote the passing of time, and way too many lingering shots of the surface of the lake. The story is anemic and takes its time building to a fairly predictable climax, with a cheap and unlikely slasher moment thrown in along the way. L’ Inconnu du Lac is an interesting curiosity, but not sexy or tense enough to put up with the snail’s pace and an overall feeling of ennui. That’s right – I totally speak French.