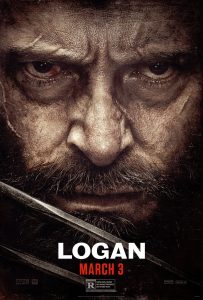 Logan is a pleasant surprise after the last X-Men related movie, the overblown and messy X-Men – Apocalpyse. Logan’s story is more intimate and small-scale. And really depressing. The dark and mature tone as well as the future setting – it takes place in 2029, although not much seems different apart from self-driving cars – set it far apart from the other movies in the X-Men franchise. It almost seems like a story from Marvel’s old What If? line of comics, in which alternate realities were explored. There is decrepitude, decline, more than the usual amount of explicit violence and a serious tone that hardly ever lets up. This is a melancholy art-house film for grown-ups about loss, more than a light power fantasy for kids. It makes for a creatively liberating new take on Wolverine, who was at the center for many of the X-Men movies and big periods of the comics. In this version of the ‘verse, kindness is not always rewarded and bad things happen to good people.

Vague references do tie Logan to previous movies, seemingly making it the official continuation, in which case this entry would serve as a really downbeat, understated coda to all the mayhem that came before. Only a few characters from the comics make an appearance this time around, most notably Caliban (Stephen Merchant), Professor Xavier (Patrick Stewart) and X-23 (Dafne Keen).

It seems fitting that this is allegedly Hugh Jackman’s last time playing Wolverine, after ably portraying him for seven movies. Not all of the movies were great – and his previous two solo outings were flawed –  but here he proves that, when given good material, he can shine in the role. He is definitely going out on top.