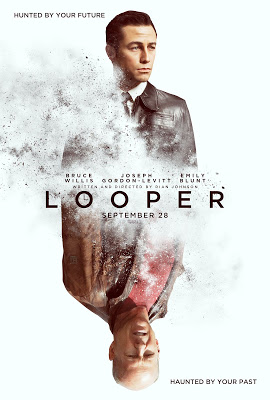 Looper is a futuristic action thriller that combines criminals, hover bikes, time travel and telekinesis to interesting effect. It starts both Joseph Gordon-Levitt and Bruce Willis as Joe, a ‘looper’. Loopers assassinate people that are sent back from the future by a criminal organization, for clean disposal. When they come to the end of their employ, the older version of them is also sent back in time in a process that is called ‘closing the loop’. They kill their older self, collect the gold that comes packaged with their matured version and enjoy an early retirement until such time that they get killed by their younger past self. See how this could get confusing? Well, things certainly do get complicated when older Joe (Willis) manages to escape and runs rampant in the past, trying to set things right for the future, requiring younger Joe (Gordon-Levitt) to go after him.

There’s a lot that works about this movie and there are only a few minor things that annoy. The telekinesis angle seems superfluous at first, but starts to make sense later on. The related special effect that’s used a few times to make a coin hover, looks glaringly fake however. Considering that it seems like such a simple and probably not too expensive special effect, that boggles the mind. But as nitpicks go, it’s a pretty small nit. A larger one is the make-up that was applied to Gordon-Levitt’s face to make it more believable that he would age into Willis. In a movie that requires us to buy into complicated time-travel scenarios and other flights of fancy, it seems odd to think that the audience needs face-altering make-up to go along with Joseph turning into Bruce. If anything, it’s distracting until you get past the “hey, that’s Gordon-Levitt, but he looks kinda weird” phase. 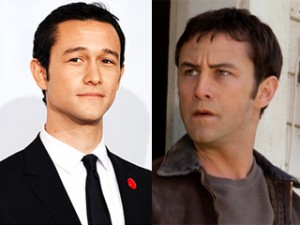 The acting is solid all the way round. You expect as much from the big names that come attached, but the show was stolen by the most ‘real’ and likeable precocious kid I’ve seen in a long time. He is completely believable, both when he’s being unnervingly mature and when he suddenly shows his actual young age and acts like a vulnerable kid.

Getting into the plot in detail… well, it’s hard to discuss it without avoiding spoilers. So instead, a note about time travel: there are only two approaches to this that avoid a paradox. The first one states that you can’t really change the past. If you go back in time to change things, it will turn out that you were in fact already a deciding factor in how things turned out initially. The second one states that you can change the past, but this will not affect your own past. Instead, it will create an alternate reality spinning off from the moment where you intervene (See: Star Trek). Any other form of temporal causality is likely to have you scratching your head. Changing your own past is bound to get fuzzy when it comes to logic. In Back to the Future, when time-travelling Marty McFly messes up how his parents initially meet, he should have disappeared. (I’d say instantly, the movie says gradually.) But then, if he never existed, he never would have derailed their meeting, so he would have existed as before and messed up their meeting again. (Sidebar: scifi comedy series Red Dwarf cheerfully thumbs its nose at this kind of temporal logic by having Lister be his own dad.) I could go on about time travel a lot longer, but just read my reviews of Doctor Who and Terminator: The Sarah Connor Chronicles for more ranting on the topic.

Looper doesn’t avoid paradoxes in the end, though things seems neatly wrapped up at first glance. The narrative falls apart when you start to think things through, in ways I can’t explain without spoiling the ending. But the movie is undeniably entertaining, so it’s probably best if you don’t give it a second thought and just enjoy the ride. 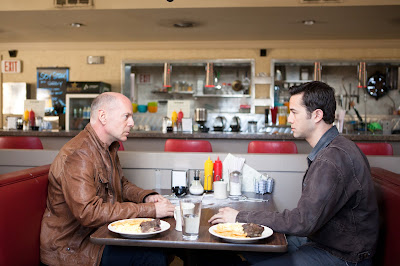