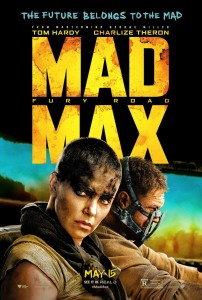 Mad Max – Fury Road is a very good action movie that makes you realize that physical stunts give a kick that special effects just can’t quite match, no matter how good they are. Not that there isn’t CGI here, but during the chase that makes up the majority of the movie, there is a sense that you’re watching something real and tangible, even if it’s taking place in an obviously fictional and far-out context.

The context is a trek through the dusty post-apocalyptic world seen in previous Mad Max movies. The original director returned for this (George Miller) but thankfully the titular role is no longer filled by the deeply unsympathetic Mel Gibson, who has been replaced by Tom Hardy. Funnily enough, it’s not Max who takes the lead though. He’s mostly tagging along and ultimately helping out in a story revolving around ‘Imperator Furiosa’ (Charlize Theron), whom he begrudgingly becomes an ally to. This has made some of the fans of the series grumble, but works really well for the movie. It remains to be seen if Max could carry another movie by himself unless they go a lot deeper than simply painting him as a traumatised loner, unable to move on. 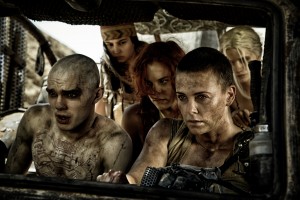 Theron has received a lot of praise and it seems her role is headed for iconic female action star status, on par with Ripley from the Alien movies. I would be surprised if they don’t make her part of the inevitable sequel, assuming she doesn’t get her own spin-off. Hilariously, the focus on her and a few other strong women has made some insecure males get into a huff. They don’t like that someone has taken what should have been a total sausage fest (in their opinion) and has turned it into feminist propaganda (again, their opinion). Still, as critics and audiences have embraced the movie in droves, I doubt Warner Bros will care much about this wacky minority. 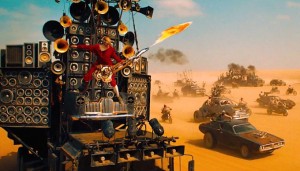 The movie is not flawless. Since it is basically one long chase, with a few short breaks in between, it does feel like there is some repetition going on. But the trek gets peppered with enough variety that it doesn’t really get old. As said, the reliance on stunts over special effects for the majority of the time, makes the action more involving. Add some sly humour and weird Viking-like cultural proclivities (‘Witness me!’) and the mix keeps you intrigued and entertained for the duration. You may like or dislike some of the campier elements. My personal highlight is the Evil Camp’s soundtrack truck, which has four large drums on the back and a Metal-playing guitarist on the front, with a flamethrowing guitar suspended on bungee cords.

The ending seems a bit naive, resolving things more neatly and faster than makes sense.  But because of the goodwill that the movie has created by that time, by being thoroughly enjoyable, you won’t really care.