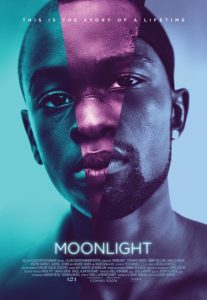 Moonlight is a beautiful movie with some pacing oddities. Over the course of three titled chapters, it shows the journey to manhood of Chiron, a gay black man who lives in an impoverished neighborhood plagued by drugs. Masculinity – or the semblance thereof – is the main theme here. Already a precarious concept in an environment where machismo means power and power is needed to survive, it is complicated by Chiron’s realization that he is attracted to men. There is no hiding from it, as the people around him nail down his orientation before he himself knows what they are talking about. How will he manage to get to adulthood when others see him as someone to humiliate and look down on?

The film jumps chronologically from him as a young boy (Alex Hibbert), to him as an awkward teen (Ashton Sanders), to him as an adult (Trevante Rhodes). The fragile front of hardened masculinity Chiron ultimately creates, out of necessity, is depressing but makes sense considering what came before. Still, for all the sad things in the movie, there is also kindness and hope. Most complex is Chiron’s warm father figure Juan (Mahershala Ali) who just happens to be a crack dealer, selling the stuff that is ruining lives, including that of Chiron’s abusive, addicted mother. 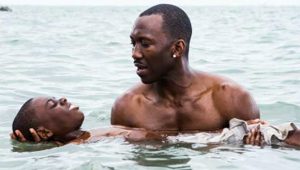 If you were bullied as a kid or a teenager, be ready to relive some of those feelings when watching this movie. Though you are likely to come away feeling that you had it easy, comparatively speaking. I, for one, realized how truly sheltered I was, even if I may not have experienced it like that at the time.

Because of the three-chapter structure of Moonlight, major events that happen in-between the highlighted periods are skipped and just referenced in passing. This sometimes feels odd, because of the impact that these things would have had on Chiron. The actual transformation from teen to adult also goes unseen, even if the blank space is filled in after the fact, so you can intuit how he got from one to the other. You could easily reshape the story as a mini-series, with more time to tell all.

he film’s final scene is a salve to the rawness that came before, but it also frustrates. It ends while something momentous seems to be happening. That it leaves things up in the air works on an artistic level but is vaguely unsatisfying on an emotional level. Considering how invested you are by then in what is going on in Chiron’s head, you want to see at least a little of what would happen in chapter four. But in any case, as brought to life by three great actors, Chiron is a character that will stick in your mind long after the credits.