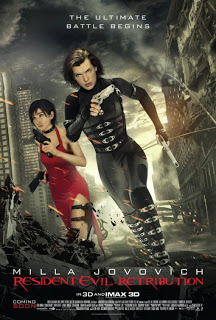 I just observed Resident Evil: Retribution. I say ‘observed’ rather than watched, because I knew going in that I would enjoy it more on an analytical level than I would enjoy the story or characters. I knew this because the previous four entries in this franchise all contained a lot of loud noises, kinetic energy, slightly too cheap special effects, flat characters and lacked any real emotional point of entry for the viewer. It’s not that the franchise lacks plot, it’s just that it’s a massively convoluted and badly thought-out one, which keeps getting twisted and turned in awkward ways.

The movie picks up right at the moment its predecessor stopped, and after one artsy scene it has the leading lady (Milla Jovovich) recapping ‘the story so far’ for the viewers, including shots from previous entries in the franchise. That’s pretty lazy storytelling and it doesn’t seem all that necessary as the film quickly resolves the last movie’s cliffhanger in a sloppy and unsatisfying way and then reverts to the ‘let’s escape from a big base’-scenario from the first movie.

So what is the franchise about? The evil Umbrella Corporation had a virus that accidentally spread from an underground vault and turned most of the world population into mutated zombies. The A.I. from that ill-fated vault decided to stop the mutation by killing everybody on the planet and the head of the formerly Evil company now wants to stop it. Meanwhile, Jovovich first escaped from the vault, then got injected with the virus but it gave her superpowers but then those have been taken away again. Or something. I may have glazed over at some key points in the narrative.

I am not entirely clear on how she is being all Neo and doing slow-motion backflips and in general kicking martial arts-style ass if she is just a simple human now, but then I am not entirely clear on a lot of things in this movie. Such as: why does a big monster waste no time killing a few people, but then doesn’t kill the one person still necessary to the plot, dragging its victim to its nest instead? Why is this monster first impervious to bullets and then temporarily incapacitated by them? Why does an A.I. need to create an actual physical representation of people and a city to simulate a viral outbreak? Why doesn’t it run virtual tests and infect some of the army of test subjects apparently at its disposal? How is this massive base run by just a handful of people?

Much like the previous flicks, this Resident Evil entry strings together action sequences that have the semblance of Cool, but lack rounded characters or a coherent bigger picture to give them meaning and make the viewer care. It comes with enough plot holes in the central storyline to make even the most hardcore suspenders of disbelief snap.

But maybe I need to just speak for myself, as the movies are apparently successful enough to continue churning out new ones. And director Paul W.S. Anderson and his wife/ lead actrice Milla Jovovich keep koming back for more, so it seems they are having fun with this franchise. Which is romantic, I suppose. The next entry is rumored to be the last one, but I’m sure someone down the line will reconsider if it’s successful enough. Just like some of the villains in this movie, the Resident Evil series seems almost impossible to kill.