‘New Decade, New Rules’ the poster for Scream 4 claims. But then again, the poster for Scream 3 claimed: ‘Rules of a trilogy: Chapter one sets the rules. Chapter two bends the rules. But in the finale…forget the rules.’ This did not prevent the ‘final’ chapter in the trilogy from rehashing rules all over the place and being the least fresh. Scream 4 promises a reassessment of the current state of horror-movies and there are indeed references to recent humorless, gory horror-porn franchises, like the Saw series. However, in between an impressively ‘meta’ opening (commenting on horror that comments on itself) and a pretty inventive – if not totally satisfying – ending, the viewer gets more of the same ol’, same ol’. Sidney returns to Woodsboro to promote a book about how she got over the traumatic experience of the first three (!) killing sprees she lived through. Cue a killer (or killers) wearing the infamous Ghostface mask, who run(s) around after hysterical teenagers with a sharp knife, slaughtering them if at all possible, occasionally pausing to make menacing phone-calls in a gravelly voice.

The main ‘new rule’ is said to be that ‘the unexpected is now expected’. Which doesn’t really mean much, when you think about it, since it’s circular. Tension is created here as it is in most horror movies: by toying with expectations. There are some set-ups that don’t pay off, some that do and there are some surprise shocks thrown in, all to keep the viewer a little off-balance and enjoying their ride on the rollercoaster. It’s skillfully executed, but it doesn’t feel like the Scream franchise is treading new ground, mixing somewhat predictable pop culture references, with self-referential laughs and violence. Much like in Scream 3, the humor and scares tend to step on each other’s toes, causing some jokes to fall flat and the violence to lack impact. It doesn’t help that the movie fails to make you care about the new characters – who make some amazingly dumb decisions – and makes the returning trio of Sidney (Neve Campbell), Dewey (David Arquette) and Gale (Courteney Cox) less relatable than they were in the original movies. It’s hard to get invested in a horror movie if you don’t actually care who lives and who dies. To its credit however, you do keep playing the ‘who is the killer’ guessing game throughout and don’t feel cheated by the answer.

Considering that the movie seems to be treading water, it’s surprising that screenwriter Kevin Williamson (Dawson’s Creek, The Vampire Diaries) pitched this movie as the first of a new trilogy. It seems to indicate that he still has some new tricks up his sleeve. If so, he’d better start pulling them out in greater amounts for the next chapter or risk the audience getting too bored. The movie had a so-so opening and it’s not clear if he will get the opportunity to spread out the plot in the way he intended to do. What does seem clear, is that the franchise lives or dies with the writer in this case: Williamson was barely involved in Scream 3 and only partly in Scream 4, resulting in a noticeably less tight script, the balance between funny and scary being off in ways that did not seem intended and in the dialogue being less sharp.

The movie is getting relatively good scores on the IMDB from ‘regular’ viewers, who I imagine must mostly be new to the series (so it feels fresh to them) or dedicated fans, sticking by their franchise. In any case, this could indicate there’s more life in the Scream saga yet, as long as it manages to make money.

NITPICKS (very mild spoilers): We have had four killing sprees now, perpetrated by quite a few separate killers, if you add them up. Where did all these people get the training to sneak around without a sound and the ability to disappear into thin air when someone looks away for a second? Is there a Ghostface School of Murder somewhere, teaching these tricks? Why would you go out on the town and get drunk, knowing there’s a killer after you? Why – in gun-happy America – doesn’t any of the victims-to-be grab a gun and just shoot that Ghostface motherf*cker already? Wouldn’t at least Sidney be carrying one around at all time, just in case? And speaking of guns: giving someone who has his/her finger on the trigger of a gun an electric shock, would result in the finger cramping up and pulling said trigger. You’ll see why this is problematic if you go see the movie. 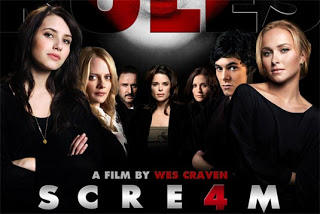