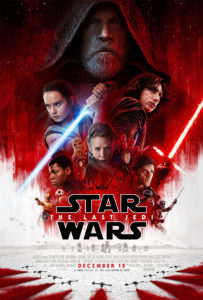 The Last Jedi had a lot to prove. It followed the successful mission statement that was The Force Awakens – which skillfully reworked most of the ingredients from the first (1977) film but stuck so close to the original recipe that it seemed derivative. The sequel had to prove that there was something new to say and that this new trilogy would not just be copying all of its material from the original one. And this new chapter does manage to throw a few very interesting curve-balls, though this has also made it the most divisive Star Wars film yet.

To understand what has pissed some fans off, context is required. Before Disney picked up the rights to Star Wars from George Lucas, there was an Extended Universe, in the form of massive amounts of comics, novels and games. There were prequels and sequels to the movies in there, with a rich tapestry of characters. In it, Luke, Leia and Han Solo had wild adventures and though things did get bleak on occasion, they always had each other to fall back on. (Also, Luke had a love interest called Mara Jade and the Solo-Skywalker-clan had three kids instead instead of one, with just one turning Evil.) Understandably, Disney decided that all these adventures could no longer be ‘canon’, part of the official continuity. After all, many people would have only seen the movies and most kids would not even have been around when most of these stories were originally published. Sticking to the lore would have weighed the franchise down and made it overly complex. However, fans with a major emotional investment in the Extended Universe were still hoping for some acknowledgement of major characters from that realm. The Last Jedi seems to have definitively buried that hope, and the lives it deals to the original three heroes instead are a bit of a downer. To add insult to injury, the film is also blunt about answering a mystery from The Force Awakens, which some fans had been wildly speculating about and was deemed very important. A lot of those fans did not like the resolution.

The theme of The Last Jedi seems to be ‘failure’. Han failed Leia, lost his son and never managed to get the untold riches he could not help but chase, Leia did not manage to establish intergalactic peace and lost both Han and her son. Luke, finally, failed his friends by failing their son – as well as his other pupils – and withdrew from the world, defeated. The new heroes (Rey, Finn and Poe) also spend a surprising amount of time failing, operating by the rules of Old Star Wars, in which a Chosen Few have all the answers and even the most far-fetched schemes work out. There are still plenty of entertaining ‘yeah, right’ moments of heroism-through-luck-and-coincidence in the film, but The Last Jedi hands off some of the most interesting acts of heroism to side-characters. It undercuts the idea of Destiny, proposing the liberating idea that instead of needing to have a special heritage, anyone can be a self-made hero if they will it so. 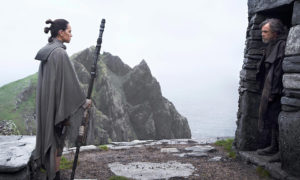 Personally, I really liked The Last Jedi. I followed the Extended Universe books for a while, but had bailed on them a long time ago already. So I have a vague fondness for that material, but am not too invested in it. The film shows a colder, more nuanced, sad ‘reality’. It humanizes its characters, making them more interesting by showing their less lovable traits. There are some beautiful scifi images and the special effects are mostly great, apart from a scene that is both very satisfying to Leia fans, as well as giggle-worthy at the same time. (You will know it when you see it.) My favorite scene is a beautifully framed sacrifice – which I can not get into because of spoilers – although fans online are faulting its logic. 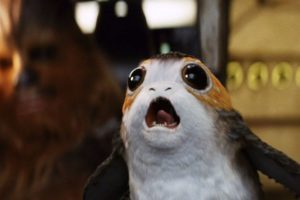 For all the melancholy scenes, there is a lot of goofiness as well. The Porgs are funny, while also seemingly a cynical toy-selling device (though apparently they were invented out of necessity to cover up inconvenient birds). And BB-8 is cute, but the writers push his adorableness a bit too much this time by making him do things he obviously could not do, to get the plot out of a tight spot. All the while you can almost hear the writers winking really hard at the audience. It works in the moment, but feels lazy as soon as the moment passes. Another nitpick would be that Captain Phasma is wasted as a character. She seems potentially interesting, but just like in the previous movie, there is zero depth or development, making you wonder why she is even there. Hopefully, the new Extended Universe books will be able to move her beyond just having chrome armor and a bad attitude. Overall, the film is smart about switching in tone between seriousness and fun – even if the comedy is sometimes a little wide off the mark. The middle of the film gets bogged down by a side-mission that entertains but feels out of place, though the finale more than makes up for this.

On the basis of The Last Jedi, director Rian Johnson has already been given the go-ahead for an original trilogy set in the Star Wars universe, not necessarily tied to any characters from the previous films. The last film in the current trilogy will be made by J.J. Abrahams again, who also made The Force Awakens. Time will tell if he will maintain the thoughtful tone of The Last Jedi or will swing back to full rollicking adventure mode. I hope that he will not undo anything achieved here because of some vocal, dissatisfied fans. The Last Jedi may not be what everybody wants, but it is what the franchise needs.