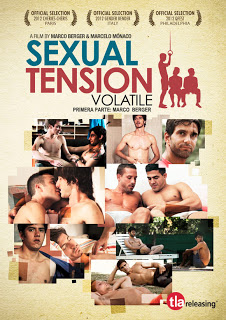 Tensión Sexual, Volumen 1: Volátil is a collection of vignettes, mostly about bulges in underwear that travel dangerously close to someone who might be interested in the contents of said underwear. The viewer is made complicit, as the bulges often get close to the camera and linger there. There is even some full-frontal nudity on the part of some sexy Argentinian men, which doesn’t displease. There is no release to the tension, at least not on screen, as these charged, short encounters between men fizzle by design, apart from one or two pieces where a well-timed fade-out leaves you wondering.

At its best, Tensión Sexual is playful and manages to be erotic, but it does fall flat on occasion. For instance, there is a wordless story about a male nurse who replaces a sexy man’s usual nurse. The nurse proceeds to soap and shower his patient in an extended sequence that had me checking my watch. It doesn’t help that the nurse has something creepy about him, and that his sexy patient mostly looks bored. Chemistry can be hard to bring across on screen, especially if you can’t fall back on kissing and sex, because the general theme here is ‘missed opportunities’. There may be as many lingering stares here as there were in the infamous Twilight. Not surprisingly, the couple of stories that forego dialogue are the worst offenders in this respect.

The pieces I enjoyed the most were the ones that showed a sense of humor. There is the fairly unbelievable story of one supposedly straight guy teaching another supposedly straight guy how to make love to a lady, by getting near-naked and acting things out with him. And there is a story where it becomes clear that one of two muscled training buddies is sneakily seducing the other. The fun here is that it takes the audience a while to figure out that one of them is doing it, and that his friend doesn’t catch on even after we do.

You do have to be a somewhat shy and patient person to identify with most of the characters in this movie. Once or twice I rolled my eyes wondering why someone was playing coy and didn’t just make a move already. By the end of it all, despite some lulls that lead to mild boredom, Tensión Sexual mostly delivers on its title. It is extended foreplay without the release of sex. It leaves you titillated, a bit frustrated and in need of a good shag.