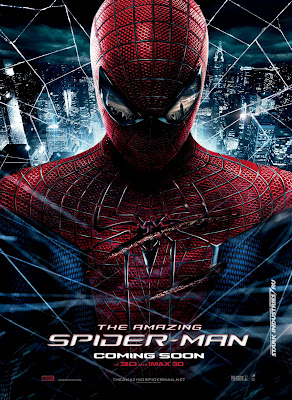 Did we really need a Spider-Man reboot so soon after the Sam Raimi-shaped trilogy? Probably not, but the company behind it (Sony Pictures) did, to retain the rights to the character and to keep them from defaulting back to Marvel. Bad news for those hoping to see him join The Avengers anytime soon. And the movie may also have been needed to purge the bad taste left by Spider-Man 3, which was a major letdown after the spectacular Spider-Man 2: the people at the showing I attended even laughed out loud at what was supposed to be a very emotional death scene. And let’s collectively suppress the memory of Tobey Maguire as ‘evil’ Spidey, shall we? Repeat after me: It. Never. Happened.

In any case: The Amazing Spider-Man is actually surprisingly entertaining, considering how unnecessary the entire undertaking feels, basically retelling the superhero’s origin story again while remixing it with new elements from the Spider-Man universe. It gives us The Lizard/Dr. Curt Connors as the supervillain du jour, played by Rhys Ifans. By the way, this must be frustrating for actor Dylan Baker who lingered in the background during the Raimi trilogy as the same character, foreshadowing his ass off, fruitlessly waiting for his time center stage. Andrew Garfield makes for a younger and hipper-but-still-underdog Peter Parker and Emma Stone as Gwen Stacey is a less doe-eyed, more assertive love-interest than Kirsten Dunst was as Mary Jane Watson. Parker discovering his powers is also done better here than it was the last time, with more of a sense of wonder. Spidey’s webshooters, which were creepily organic in the previous incarnation, making for all kinds of pubescent symbolism, are mechanical and somehow less practically believable in this one.

The script is very much by the numbers and at no point was I especially surprised. Like in The Dark Knight Rises, there are big displays counting down to something bad happening, miraculous recoveries and various other unlikelihoods, but because this movie has a more playful and comic-booky feel to it, it seems to hurt less here than it did there. Nevertheless, there are some eye-rollers: I could have done without a sappy moment involving cranes that went for the heart-strings a bit too bluntly. It seemed to ape a similar, but more effective moment from Spider-Man 2. And it is odd that this version of Spider-Man still has a secret identity in the end as he finds himself without his mask in (semi-)public, quite likely within the reach of a camera. But then he doesn’t seem to be all that concerned about remaining anonymous and is soon more out of the closet about it than his predecessor was.

Where will the franchise go from here? Will it re-use the same villains or introduce new, less well-known ones? It’s worrying that The Goblin is getting set up as the villain for a future movie, considering that he wasn’t the best of villains last time, even if he is a main-stay in the comics. The first time around, the character wasn’t served well by the head-covering mask. Going up against the equally masked Spidey, there was an embarrassing whiff of Power Rangers to their fights. If he is indeed headed for this version of Spider-Man, that could spell trouble for Gwen Stacey, going by comic book lore (spoilers). But then, that infamous moment from the comics was already toyed with in the previous trilogy, so the series would be repeating itself. The question remains: will the franchise stick to safe and predictable remixes or actually throw the viewers a curve-ball and prove it has a right to exist? Fingers crossed for the latter.