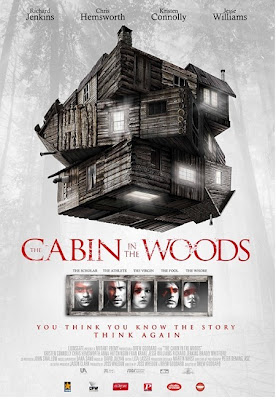 The Cabin in the Woods is a horror movie that comes with a pedigree, albeit not one rooted in straight-up horror. Director Drew Goddard was a writer for Alias, Lost, Angel and Buffy – The Vampire Slayer, the latter two being franchises created by his co-writer on this movie: Joss Whedon. As I have already declared my devotion to The Whedon recently, I am not getting into it again, but my expectation of snappy dialogue and inventive thrills was met. The movie’s release was massively delayed (by three years) because of bankruptcy of the studio that made it (MGM) and then by a later abandoned plan to convert it to 3D, so you’ll be seeing a surprisingly young, pre-Thor Chris Hemsworth.

The Cabin in the Woods is to The Texas Chainsaw Massacre as Scream was to Halloween, although it is less afraid to completely break the format in the end. The viewer is tipped off straightaway that (s)he is watching more than just a generic teen slasher flick, by odd scenes of a couple of scientists who are gearing up for an important day at work. What that work is and how it relates to a small group of teenagers who are getting ready for a weekend of fate-tempting fun at a remote cabin, is not yet clear. I won’t reveal more to avoid spoilers, but suffice to say that from then on, there be twist upon twist. Some critics have said that there are in fact a few twists too many and that the entire thing gets a bit ridiculous. Admittedly, I’d be hard-pressed to explain the logic and exact workings of what is going on in the finale and I suspect it doesn’t hang together all that well on closer inspection. But for me, the way that things get hysterical and unapologetically over-the-top near the end is the best thing about the movie. There is a satire here with some moral points to make, but mostly The Cabin in the Woods is about laughs, gore and gallons of blood. It doesn’t expect you to take it at all seriously, just to follow along until its goofy conclusion with a grin on your face. Scares are secondary, and there wasn’t a moment that made me jump in my seat.

If the movie has a fault apart from fuzzy logic, it’s that the constant overlay of irony keeps you at a distance from the characters. You don’t feel all that invested in keeping them alive. That it just as well as it is a given that most (potentially all) of them won’t make it to the finish line, but it does leave you observing more than feeling the horror. Which fits neatly with the framework of the movie, but makes it lack emotional impact. The first third or so of the movie sticks close to horror cliché, necessary to subvert those same cliché’s later on. But on their own, the scenes moving the teenagers into position for bloodshed would have been a bit boring, only holding the attention because of the assurance that something more complex is going on.

This movie is destined to be a classic along the lines of Evil Dead, be it with a bigger budget. The writers have set themselves a bit of a challenge should the studio ask for a sequel, but then I guess a prequel that addresses some of the many questions it leaves viewers with could be interesting. However, it may be better to leave this as a one-off; an innovative pallet cleanser that reminds us that horror doesn’t just have to be a repetitive string of meaningless deaths being dropped off the conveyor belt of entertainment into your local cinema. May The Cabin in the Woods serve as an axe to the atrophied brain of the mainstream torture-porn horror genre and leave it with a fresh perspective when it rises up again. As horror always must: to explore our fascination with death and dying. 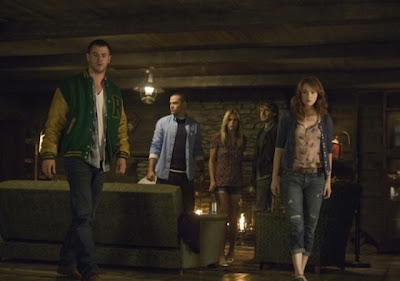