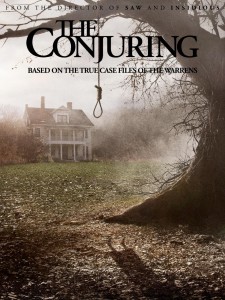 The Conjuring is a nicely old-fashioned ‘haunted house’ horror movie that mostly relies on classic elements, like creaking doors that move by themselves and eerie noises drifting through the hallways of a spooky house. Ghostly jump-scares are initially limited to the background. An apparition may pop up behind someone’s back, out-of-focus, or get spotted for a second in a reflection, just before the camera cuts away. There’s a nostalgic innocence to it all, without the self-aware irony that is often used these days in case of a cliché. “Gosh, I wonder why someone boarded up the basement. I bet nothing bad can come from us messing around down there.”

The movie is at its most effective early on, playing around with simple tricks that don’t show as much as suggest. When a small group of excorcists joins the family who is under spectral siege, the scare tactics get less subtle and by the end, large amounts of make-up are involved. The slightly hokey denouement, coupled with the fact that a haunting is less creepy when a whole team is around to tackle it, means that the movie’s second half doesn’t quite live up to the first. It’s still entertaining, just not especially scary.

All of this is supposedly based on true events. Of course, how much you buy into that will depend on your personal beliefs about ghosts and the afterlife. But there are some specifics that I hope are based in fact, such as there being an excorcist couple who guard a room full of haunted objects in their own house (which are periodically blessed to keep the evil in check). Even if you don’t believe in cursed objects, that is a cool idea. I may do something similar, as I just discovered a perfectly suited extra room in my house. Its door had been hidden behind wallpaper for some reason. I’m just off to clean out that space and fix the lightbulb that keeps flickering inexplicably. Wait, is someone knocking against that locked door from the inside? I must be imagining it, but let me just go check. I’ll be right back.