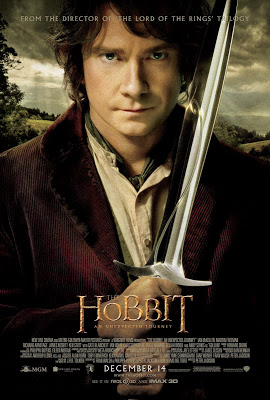 Is it a good idea to take The Hobbit, a relatively simple story for children contained in a single, not especially thick book, and then to spin it into three epic, connecting movies? The answer from an economic perspective is, of course, “yes”. After all, the three movies will form a prequel to the hugely successful Lord of the Rings trilogy. It means three tickets sold per viewer by the end of it all, instead of two. (To just make one (1) movie out of one (1) book would be madness. And more importantly, bad for business.) That’s not to say I believe returning director Peter Jackson had dollar signs for eyes when he decided to make it a trilogy again, just that he was over-indulged by a movie studio with less than artistic motives.

The Lord of the Rings was basically about a hobbit bringing a ring to a volcano to save the world. The Hobbit is about a related hobbit originally finding that ring and helping some dwarves reclaim their homeland by taking on a dragon. The Hobbit (or there and back again) was written by Tolkien as a children’s story, though he was consciously laying the foundation for something more, while The Lord of the Rings was a full-fledged attempt to create a new mythology for England, and was aimed primarily at adults. (To Tolkien’s horror, it ended up having the most impact on hippies and stoners at the time of publication.) Not surprisingly, considering the source, there is a different, more playful tone to Peter Jackson’s newest outing into Middle-Earth. While there was already some silliness to the first trilogy, here it is more prominent and it doesn’t quite track with other scenes that are deadly sincere. There is a delicate balance when getting people on board for a story about goblins, elves, trolls and the like. You want them to take it seriously, but most people will need an occasional wink to acknowledge that you are asking them to take a large leap of faith. This time around, there are a few too many ‘yeah, right’ moments in the recipe, that we’re expected to take at face-value. 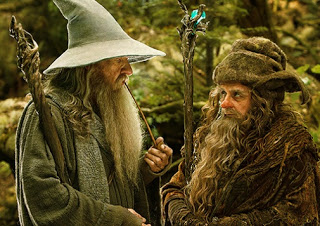 Not helping matters is that real danger seems to be lacking. The group of heroes at the center of the story go from one deadly situation to the next and emerge pretty much unscathed. Tension starts to drain away with each unlikely victory. Gandalf makes things worse, and you understand why Tolkien sidelined him for large parts of The Lord of the Rings. While I love Ian McKellen for both his acting and his work as a gay rights activist, his wizard character serves as a Deus Ex Machina too often. He is powerful, though his powers are ill-defined, and he can always save the day in a seemingly hopeless situation. (Though, oddly, not before it has actually started to seem hopeless.) Despite feeling too ‘safe’, the movie is not really for kids, as there is a fair amount of graphic violence.

A lot of extra content has been added to the original tale and back-story has been added, delving into Tolkien’s mythology. This doesn’t disguise the fact that the main narrative is being stretched to near the breaking point. Lots of exciting things happen to the heroes, but large chunks of the movie could have been removed without impacting the rest of the story. One thing happens after the other, and it doesn’t feel like all of it is intricately connected. Admittedly, spending time in this beautiful-looking realm again is fun regardless, as is meeting up with characters from the original trilogy. All the actors are game, joyously throwing themselves into their roles, and Martin Freeman is perfect as Bilbo. But forward momentum is missing, and though the end goal is noble, the stakes are not on par with those from the previous trilogy. The element of surprise is gone and it all feels very familiar. There are only so many sweeping shots of people in fantasy-gear trekking across imposing landscapes that one has patience for.

By the end of this first chapter, the heroes’ journey is far from over. (Even though they seem to have an opportunity to reach their destination quickly, which is oddly ignored.) There will no doubt be many more roadblocks on their path, but it’s going to be a long slog. For them and the viewers.

Technical note: This movie made history by being shot at double the usual frame-rate. This was supposed to render a sharper image, without motion blur, but ended up taking away movie magic. It allegedly makes the film look like a documentary and makes special effects, costumes and make-up look unconvincing. I chose to see the film at the regular frame-rate, in 3D. The 3D is fine but doesn’t add a lot to the experience. Ps: I am going to bitch-slap the next person with perfect vision who whines about having to wear 3D-glasses for a couple of hours. Cry unto me a river.