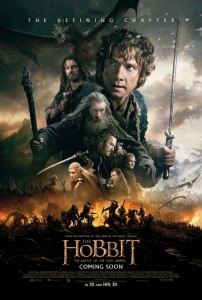 The Battle of the Five Armies is the last and the least of Peter Jackson’s six Middle-earth movies, but it is still pretty good. The element of surprise is long gone, the movie delivering just more of the same. The po-faced, serious dramatic scenes are on occasion more giggle-worthy here than I remember them being in previous entries. (Admittedly, I have not rewatched any of them.) Like The Desolation of Smaug, I saw this movie in 3D-HFR and I had the same experience with the high framerate as before. The special effects sequences that worked, looked spectacular and real, but some of the sets look artificial. Especially the early scenes in a fiery town – inhabited by folk with the worst luck in the world – called to mind a BBC television production. 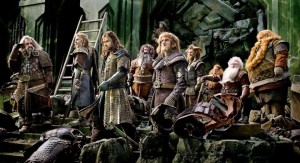 BOTFA has odd pacing. It starts with what should have been the climax of the previous movie, which plays out pretty much as expected from the foreshadowing. Then there is a slow stretch during which the stakes don’t seem all that high. People bickering about treasure just isn’t all that captivating and it’s not helped by one of the cast going a bit batty for vague reasons. Cue a long stretch during which armies battle – apparently five of them, though I am unclear which factions constituted an army. These battle scenes are impressive but – despite some cool moments – they feel overly familiar by now. And the eb and flow of them is all too predictable, which drains away the tension. Nobody important will just get cut down in an offhand manner, despite the odds of that happening. There is even time for a conversation or touching reunion on the battlefield. The logistics are confusing. The enemy seems to have an overwhelming majority, but the good guys make up for this by somehow being a lot more deadly. And like in previous movies, when all seems lost, predictably a deus-ex-machina shows up. After which there are the expected sentimental goodbyes and a slightly downbeat ending. 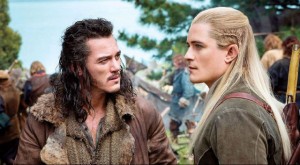 But I did enjoy the scenery-chewing cast a lot, and especially Legolas (Orlando Bloom) gets a great fight scene, even if seems to have borrowed its sense of physics from a Road Runner cartoon. Thorin (Richard Armitage) gets a good battle as well, which wraps things up, while Tauriel’s (Evangeline Lilly’s) storyline stops oddly. They may have to add her to a re-edited version of The Fellowship of the Ring, just to give her closure. What is clear here, is that the personal stories are much more interesting than the big battles.

As I tweeted once, it would be an excellent idea (in these times of Game of Thrones) to make a television series loosely based on stories from The Silmarillion. But maybe Middle-earth deserves a break first. And after this entertaining but overly exended story, maybe audiences do too.