During a transatlantic flight, I recently watched three movies in a row on the little screen embedded in the seat in front of me. My long legs in combination with cramped Economy seating made it impossible to sleep, so I pushed through the night by focusing on the tales I was being told. In order, I saw: Men in Black 3, Snow White and the Huntsman and Dark Shadows. A short review of each seems appropriate. I won’t be commenting on cinematography though, as movies are butchered/adapted to fit on the small screen, meaning 2.35:1 (cinema size) turns into ye olde television size (4:3). Shots that show two people having a conversation turn into a succession of shots cutting back and forth between them and large parts of the screen get snipped off. I am not sure why they still do this as people are now used to watching movies in the original format on their various teensy pad-devices. In any case, here were my sleep-deprived impressions: 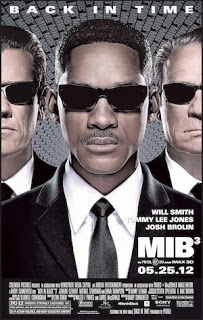 Men in Black 3 – Agent J (Will Smith) and Agent K (Tommy Lee Jones) make as good a dynamic duo as ever, policing aliens who are living on earth undercover. Mostly they do this, it seems, by zapping them with guns that make them explode into colorful goo. There is a hitch in operations when a criminal from K’s past escapes from space-prison and wipes him out of history, necessitating that J travel to 1969 to set things right. Here he ends up working with a younger version of K, played by Josh Brolin. Seeing Brolin do a dead-on impersonation of Tommy Lee Jones is pretty much enough on its own to make this movie worth your time. MIB3 feels like a return to form after the bloated and chaotic MIB2, with a pretty tidy script that has charm, loads of comic-booky action and a sweet little twist at the end. MIB4 is already being planned and if they can make it as engaging as this chapter, I’m all for it. 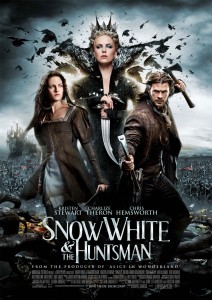 Snow White and the Huntsman – This is a somewhat confused retelling of the well-known fairytale. The tone veers between gritty action and cheesy fantasy sequences. For a while it even feels like it wants to be part of the Lord of the Rings franchise. Highlight of the film is Charlize Theron’s wicked performance as the Evil Queen Ravenna and she is supported by some cool and creepy visual effects that reminded me of the Brothers Grimm origin of the Snow White story. A love-triangle is set up between Snow White, the Huntsman and her childhood best friend but this thread is left dangling completely at the end, very obviously baiting a sequel. However, making one has gotten tricky: the married director of the film (Rupert Sanders) had a much-publicized affair with his lead (Kristen Stewart) which got more publicity than the film itself and broke up Stewart with her Twilight co-star Robert Pattinson. The affair was extra-awkward as the director’s wife played an admittedly minor part as Snow White’s doomed mom. A spin-off just starring Chris Hemsworth as The Huntsman is now likely to be made instead. 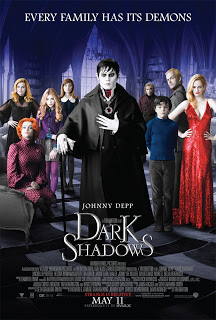 Dark Shadows – This homage to a supernatural soap-series from the sixties reunites director Tim Burton with actor Johnny Depp for what was at last count the umpteenth time. Burton’s wife Helena Bonham Carter also stars, as does Michelle Pfeiffer. The basic plot: when the head of the renowned Collins family (Depp) doesn’t return a witch’s love after an ill-advised thryst, she rather creatively curses him with vampirism. He gets buried alive (or rather ‘undead’) and only by chance resurfaces a couple of hundred years later, during the swinging sixties, gaining acceptance surprisingly easily with his Collins descendants even though he undeniably looks and acts strange and is not averse to the occasional killing spree. But then, there is more than one oddball in the dysfunctional family. The witch has also survived through the centuries and continues her feud against him, his descendants and their business, which is in direct competition to hers. All she demands is his love… Dark Shadows is fun to observe, but you feel like you’re on the outside looking in at a group of actors having a hell of a good time – which admittedly is entertaining in itself – rather than getting in on the story. As with most of Burton’s movies, the designs are great, with this time a blend of gothic and sixties elements. But there’s no sympathy to be had for a character who feels only marginally guilty about killing a bunch of innocent people or for a family who turns a blind eye to it. The ending also doesn’t really satisfy and is annoyingly open. Dark Shadows is not Burton’s best, but if you just focus on the surface and don’t give the plot too much thought, it is weird and funny enough to keep you smiling during a sleep-deprived transatlantic flight while stuffed into Economy seating.