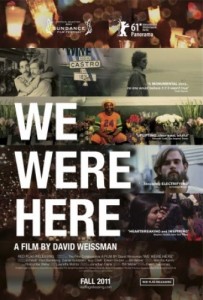 Imagine finding a vague and disturbing piece of paper stuck to the window of your local pharmacy, showing pictures of mysterious dark splotches on a man’s skin, warning you that something bad is doing the rounds. Imagine more and more people around you – friends, colleagues, partners, family, the guy serving you coffee at your local diner – starting to get these markings and dying soon thereafter. It’s unclear what is causing this sickness or how you get it, just that it seems to be mostly hitting the gay community you are part of. There is no cure, no treatment. If it turns out you are infected, you will inevitably end up in a medical facility, where a brave but desperate group of nurses and volunteer caretakers will try to ease your pain as you lie dying, wasting away to nothing. Paranoia reigns about any kind of intimate physical contact and you start to dread getting calls from friends, fearing to hear that yet another one of them is headed towards an early death, leaving you even more alone and reminding you that you may be next. This isn’t the plot to a horror movie, this is suddenly your life. It’s San Francisco during the eighties and something called AIDS – initially called GRID (gay-related immune deficiency) – is turning into an epidemic.

The documentary We Were Here tells the story of this traumatic period through interviews with people who each experienced it from their own unique perspective. There’s Daniel Goldstein, for instance, a man who lost countless friends and two lovers, got HIV himself but survived through luck and determination. There’s Ed Wolf, who by chance managed to dodge the disease and volunteered as a buddy for the dying. There’s Guy Clark, who owned a flower shop and ended up doing way too many funerals. The interviews are intercut with old film footage and pictures of men initially smiling and care-free, with no idea what is about to hit them.

Rather than getting too deeply into the medical details or the political aspects, the documentary is primarily a portrait of the San Francisco gay community as it got battered by the catastrophic epidemic, lost many of its members, pulled together stronger than ever before and ultimately managed to overcome. It puts a face on something that those who did not go through are tempted to repress, because AIDS and HIV put a damper on the still relatively new-found sexual liberation of gay men. Now that HIV is more a chronic disease rather than a quick killer, we want to forget how much this disease cost our community and get on with our lives. But it’s good that this documentary exists as a tribute to the generation of gay men who were hit the hardest, those who didn’t survive until the first retro-virals started to appear.

I saw this movie in a theater as part of a gay and lesbian movie festival and the audience and me were completely absorbed by it. There was deep silence as people listened intently, there were relieved bursts of laughter at the occasional sassy turn of phrase and there were a whole lot of barely contained sobs as the tale was told. We Were Here draws you in and puts you through the wringer, but you feel better for the experience. By the end you’ll want to hug the people who made themselves vulnerable and poured their heart out to you in the interviews. It’s a great documentary and should not be missed.