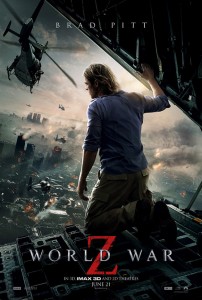 World War Z is based on a very interesting book with the same title, though the movie actually has nothing in common with its literary namesake except for that title. It stars producer/actor Brad Pitt as the savior of humanity. He springs into action when there is a lethal global outbreak. People are turning mindless and aggressive, forming swarms, and they are hunting down new victims to bite, to further spread the disease. Pitt travels around the globe making important observations that, it seems, no one else was capable of and he improbably lives through disaster after disaster.

Meanwhile, all those around Pitt either heroically die to facilitate his survival or stand around slack-jawed and watch him go. He does pick up a companion, for no apparent reason favoring her above rest of the team he is with at that moment. The others die off-screen, instantly forgotten, in a sea of zombies. It seems appropriate in a movie where the zombies swarm like angry ants, that even the uninfected have a group mentality and are all too happy to give up their life for the greater good. Somehow they must sense that Brad Pitt is the Last Hope for Mankind.

The weird focus on Pitt’s character alone is the main failing of this otherwise pretty entertaining zombie outing. It would have made so much more sense to make World War Z into an ensemble piece. Various people across the globe could have been making discoveries and piecing things together. Some of these people would survive, some wouldn’t, and this would allow for a lot more tension. Nevertheless, the movie is still worth watching as-is. There are some spectacular action sequences in interesting locations. And the movie does manage to wrangle up some tension even though you know that Pitt is unkillable and that anyone else is highly disposable anyway. World War Z is somewhat brain-dead but still up and running, much like one of its zombies.