All Good Things Should Come to a Great End

Telling the story you want to tell in television can be a tricky process. Babylon 5 famously had a pre-planned five year story arc. When it came to the execution however, the ball was fumbled. When the fourth season was nearing completion, the series looked in serious danger of getting cancelled. So a ‘final’ episode was filmed, but then shifted to the end of the fifth season when – surprise – the series got renewed after all. Having very little production time on this last season, the quality dropped.

Spanners also get thrown into the wheels of the plot when an actor suddenly drops out for whatever reason or when an actrice gets pregnant. The writers have to work around the inconveniences real life deals them. Season endings can be particularly annoying: the creators of a lot of series try to lure you back to the next season by ending the last show on a cliffhanger. All fine and dandy, but that is very frustrating when said series does not end up having a next season. It is the zappers’ equivalent of getting to a really exciting part in a book and suddenly finding that all the remaining pages are blank.

Both the producers of television series and the American networks are to blame for this viewer-unfriendly work process. The networks often don’t give a new series time to find an audience. They promote the hell out of it before it airs, then pull the plug when it doesn’t score within a few weeks, betraying and angering the audience it was starting to build up. The producers – for their part – should realise that things might not work out the way they want it to and wrap things up fairly well season by season, rather than leave viewers hanging. Buffy the Vampire Slayer pulled this off, with a different main story arc for each season. It also makes good sense considering the ever-growing afterlife for series on DVD. A story without an ending is harder to sell. Graphic novels are starting to outsell comics for that very reason: people like their stories serialised, but in manageable nuggets and without a life-long commitment.

Getting rid of those season-ending cliffhangers will be difficult for a fairly twisted reason though: a sense of self-preservation among the producers. They seem to figure that a frustrating ending will whip the fans into action and might result in more episodes being shot – or even a complete next season. When Farscape ended with its two main leads apparently dead, it was through the loud protesting of fans that a three-hour miniseries was made to wrap things up neatly. And when Jericho was recently cancelled, the clamouring of fans led the network to decide to shoot seven additional episodes, with a view to renewing.

I think there should be a clause in the contract for any series: should it get cancelled, the crew should automatically get the budget to film an additional two or three episodes, with the intent of finishing the story. And if the networks have cold feet about new series, they should air shorter first seasons (let’s say twelve-or-so episodes) that have a sense of completion to them. Daybreak had a thirteen episode run and got cancelled, but only left one or two plot-points hanging. It should be said that even these could have been removed by snipping out one or two shots (adding up to maybe thirty seconds in total) when it became clear that the series would not be renewed. 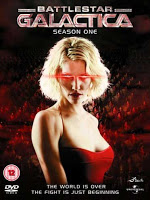 to that good thing becoming a bad thing. Series like Ally McBeal and many others made you wish for it to be retroactively axed a season or two before it actually was. It is better to have a loved series die while you still love it, than for it to keep hanging around until you just want the damn thing to DIE already. It feels like a slap in the face,when you invested so much time in a series, only to slowly watch it turn to crap and end on a bum note. Sometimes I can feel happy to know that a beloved series is ending. The coming season will be Battlestar Galactica‘s last, the producers have decided. This is a conscious creative decision, and it means they can go for broke with the story. Hopefully this will lead to a spectacular and fitting end and other series will follow suit.

But still – occasionally – I feel like a series has ended before its time. Yes, Veronica Mars, I am talking to you. It took a couple of episodes to get into it, but I loved the first season. The second series was a bit convoluted, but still worked and even the third season, though more uneven, was consistently entertaining. Truth be told – I could just could not get enough of the never-depleting supply of sass that Kristine Bell kept serving up. And she left our screens without that firm sense of resolution I have been talking about here. Bummer. 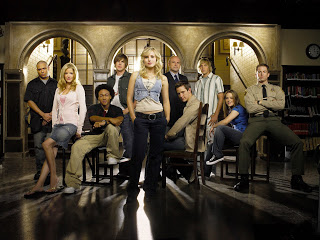