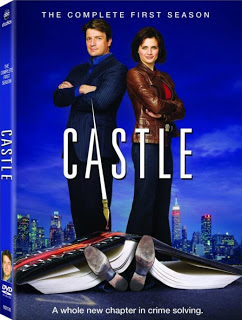 Castle is like a box of chocolates. Not one of those where you don’t know what you’re going to get – far from it – but rather one filled with that one special kind of bon-bon you can’t stop eating ‘just one more’ of, even though it’s empty calories and it will make you feel bloated afterwards. (Yes, I’m gay.) It’s a very entertaining but very formulaic quirky crime-solving series, closely related to Bones and Psych.

In a rather precarious and unbelievable set-up for a continuing series, famous pulp-thriller writer Richard Castle (Nathan Fillion) starts shadowing NYPD detective Kate Beckett (Stana Katic). He has recently killed off his cash cow of a main character and is basing his new one (‘Nicki Heat’) on her. He is connected to people in politically high places and to keep them happy, the NYPD is allowing him to follow her around apparently indefinitely. It’s stated that he wants to make all the details in his book ‘authentic’ and this would explain why he needs to be around 24-7 for months on end. As time management goes, this is not the most efficient way of going about things, but since Castle helps Beckett unravel the tangled narrative behind each crime – there are no straightforward murders in this precinct – he proves useful and they grow ever closer.

Their cheery witticisms while hovering over a dead body can come across as somewhat insensitive, but playfulness is what this series is about. I doubt the NYPD deals with things like ‘death by gargoyle’, frozen corpses left lying around and naked, handcuffed, dead ladies covered in caramel sauce on a regular basis. If you are expecting hard-boiled and realistic, you will be disappointed. Though during the first couple of episodes Beckett states a few times that most crime shows are removed from reality and that Rick Castle will now experience how an investigation ‘really’ works, the series is soon employing shortcuts for the convenience of the plot and making your eyes roll. Investigations that would take a huge amount of time get magically condensed and after a complicated intrigue has been brought to light, there is always some evidence to support it – as luck would have it – even though it is often circumstantial and a prosecutor would have a tough time getting a conviction. This doesn’t matter much, as generally the killers are all too easily pushed into a confession. These groan-inducing moments that not only stretch believability but sometimes even fold it into an entertaining balloon animal, don’t spoil the fun, but you start to wonder about some convenient narrative crutches: when will murderers learn not to use their perfectly traceable credit-card to buy stuff they will use for their kill or in the vicinity of their prospective victim around the time of the murder?

The average episode follows this predictable structure: body gets found in odd circumstances – cute scene with Castle in his very expensive loft with sweet daughter and/or cohabitating eccentric mother – he gets called to the murder scene – he and Beckett interview a succession of suspects, buoyed by revelations, imagination and ever-present snippets of evidence – until a slightly more well-known tv-actor than the other interviewees/suspects from the first part of the episode turns out to be the killer. Engaging characters and dialogue keep the recipe from growing stale. Castle’s family set-up is on the verge of being too cute, but generally manages to charm you into submission. The ‘will they or won’t they’ romantic vibe between the two leads also keeps things interesting, though the series doesn’t seem to be in a rush to move this plot-point forward. Sensibly, perhaps, as series from the past have proven that there is really nowhere interesting to go once you couple up your leads (*cough* Moonlighting *cough*). Sure, you can have them get together and break them up maybe once and then still keep them circling each other, but the audience will lose patience. Did anyone really still want Ross and Rachel to even be on the same screen towards the end of Friends?

Nathan Fillion steals the show as a charming wise-ass, the kind of role he seems born to play, whether he turns out to be a space cowboy, a supervillain or a pulp fiction writer. However, the rest of the cast is equally game and a pleasure to watch. If you don’t mind the occasional ‘yeah, right’ moment and can appreciate fun shows that aren’t all that intellectually nourishing, the Castle crowd is a good one to hang out with. A warning about the whistled tune at the beginning of each episode: after watching a couple of episodes in quick succession, it might get stuck in your head. Forever. 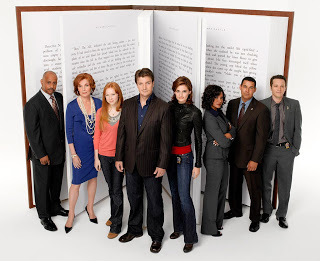