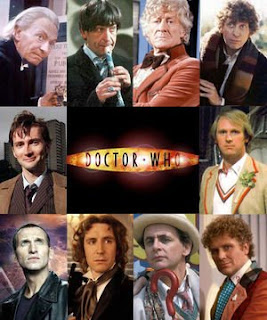 Doctor Who is a British television series about a Time Lord. This is an alien who looks totally human, but possesses two hearts and has the ability to regenerate into a different body – and therefore a different actor – when he is on the edge of death. There used to be a lot of Time Lords, but according to the current run of the television series, Doctor Who is the last survivor of a terrible battle with the Daleks, a murderous race of robot-aliens. He bounces around time and space, accompanied by one or two ‘companions’ at a time, in an unexpectedly roomy blue telephone box called the Tardis, averting disasters and saving the galaxy. I guess the telephone box was deemed nicely inconspicuous by the misguided soul who designed it. (Since I wrote that, I have been informed by more fanatic fans that this look is due to a malfunction of some computer gizmo or another, which the doctor has been unable to fix.)

The regeneration aspect is a handy one for the producers behind the series. If the actor who plays Doctor Who wants to bow out, the character can be mortally wounded and regenerate. This actually happened after the first series in the new incarnation, when Christopher Eccleston decided to leave, causing ‘his’ Doctor to morph into David Tennant. (Tennant is still going strong and wildly popular, so don’t expect him to change again soon if the producers get their way.) What adds to the fun is that the Doctor’s personality is allowed to change slightly to suit the new actor. While in other series it would be a headache to have the lead leave, for Doctor Who it just allows a new dynamic and new stories. 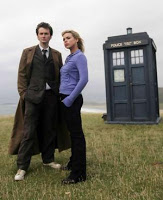 Doctor Who was off the air for a long time, originally running from 1963 until 1989. It was revived in 2005 by Russell T. Davies of Queer as Folk fame to success beyond all expectations. The fan base of the sci-fi series rivals that of Star Trek in their fanaticism, so it was quite an achievement that Russell managed to placate both them and hook a new generation of viewers. I think he played fast and loose with some of the continuity of the previous series, but I can’t be sure as there is too much material in the form of novels, radio-plays and episodes for me to wade through.

The set-up of Doctor Who allows near unlimited potential for telling stories: all of time and space are the playing ground. Believability is an issue, as the butterfly effect (small changes have major consequences) gets even more confusing when continuously jumping around in time. The current Doctor Who philosophy is that there are ‘fixed’ points in time, which have to remain unaltered and other points when things are more flexible and you can safely muck around a little. I am not sure how that would work temporally speaking, but mostly this logic is fitted to suit the scripts. Davies’ take on the stories is one of high adventure and big emotions, done with such infectious enthusiasm that you happily suspend disbelief. Granted, especially in the episodes he wrote himself, he really makes you work for that suspension. Major problems are solved or can’t be solved because of obscure bits of technobabble, just to set up cool scenes. The rules of what can happen and what can’t are often not very clear. When the resulting scenes are indeed cool enough, you won’t care but sometimes when they’re not, you end up rolling your eyes.

One of the biggest changes Davies made to the original concept was giving the people who join Doctor Who on his travels a background and families to deal with. Previously these ‘companions’ mostly served as sounding boards – so the doctor wouldn’t just talk to himself – or as people to be saved. They would ride along until they started to feel old and then be written out in one quick way or another. The ‘new’ Doctor has already gone through three companions in the current run, each one giving the stories a new spin. With Rose Tyler (Billie Piper) there was a mutual attraction – a first in Doctor Who history, I believe – Martha Jones (Freema Agyeman) crushed on the Doctor and Donna Noble (comedienne Catherine Tate) humorously clashed with him, as an equal. The way in which these companions were written out of the series – for the time being anyway – shows a definite strength of Davies: a great balance of bitter and sweet. There may be despair sometimes in the Doctor Who reality, but there is always hope. The hope sometimes veers into sappy territory, but then it is supposed to be an upbeat series also aimed at youngsters.

The aliens look silly enough to remind you of this target audience. Whether they bring to mind spiders or rhino’s or Mr. Potato Heads, the ET’s always look like they needed a slightly bigger special effects budget. But at least the producers have the guts to get creative and stray from the humanoid form occasionally. The Daleks – deadly robots with a little alien inside – have traditionally been the most popular of enemies for Doctor Who, but I have never understood why. On the surface they look cool enough – to sell toys anyway – but as killer robots go, they seem awkward and restricted in their movements. When I see their big spaceships and lairs I can’t help but wonder who did the construction on it, as they only seem to sport one spindly little gripper in front and something that looks like a toilet plunger.

In the recently aired and somewhat overstuffed finale to the fourth season, Davies wraps pretty much all of his ongoing storylines into a big bow. He will be around for four Doctor Who specials, which will be airing throughout 2009, before leaving the series. I wonder if he will be starting any new mythology or if he will make the specials self-contained, to give his successor Steven Moffat a fresh start. Moffat penned some of the most popular episodes of the new series and he previously created the UK version of the comedy series Coupling, which had some very inventive storytelling. I will be curious to see in which direction he takes the franchise. The next episode to air will be a Christmas special in December. Before then, do yourself a favour and catch up on the 2005-and-beyond run of the series, even if you didn’t like the older episodes. If not for you, then do it for your inner child. 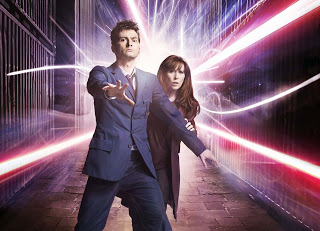 One Response to "Television Review: Doctor Who"