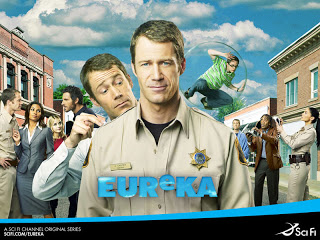 Eureka has just been renewed for a third season by the SciFi Channel. The series once badly titled ‘A Town Called Eureka‘ seems to be hitting its stride. The set-up: a U.S. Marshal (Colin Ferguson) gets stranded with his ‘delinquent’ daughter in a town with an unusual amount of geniuses. All these people are left to roam free, invent things, blow stuff up and generally mess with reality and the laws of physics. There is also a government-run research company called Global Dynamics guiding these oddballs, which might have semi-nefarious purposes. By the end of the pilot, the Marshal becomes Eureka’s Sheriff and starts making this place his home.

I wasn’t sure about the series on the basis of that first episode. The tone seemed off, some light and humorous aspects clashing with dark X-filesesque undertones. And the characters didn’t really feel connected to each other. They fixed this somewhat in the rest of the series by ditching Greg Germann (‘Fish’ from Ally McBeal) and replacing him with the dashing Ed Quinn as the boss of Global Dynamics. In doing this, they also set up a classic Romantic Triangle at the heart of the series: the sheriff falls for his government liaison, who is married to (but separated from) her new boss (Quinn).

Eureka tries too hard to be cute and goofy sometimes, channelling Northern Exposure, Twin Peaks and those ‘special’ humorous episodes of the X-Files. But the cast meshes very well after a few episodes, great one-liners fly by with charming regularity and it doesn’t make the mistake of taking itself too seriously. Sometimes, it even goes too far in this aspect: situations that should be fraught with tension don’t actually get tense because the characters don’t seem too anxious about yet another calamity threatening the town and the world. And when someone dies, though we are happily shown a charred or mangled (part of) a corpse, there isn’t much dwelling on the person who just died even though this is supposed to be a small town where most people know each other. This insistence on keeping things light can throw you out of the show sometimes: if the artificial intelligence in your high tech house went haywire, took you hostage and killed someone, would you keep living there unless the thing was rebuilt from the ground up? Also, the amazingly blue-eyed Sheriff is very funny and likeable, but comes off as a bit – well – bumbling, being surrounded by all these brainiacs. The reason he often ends up saving the day is generally because the scriptwriters let him. It is hard to imagine him as the hardcore U.S. Marshal he was supposed to be, before he came to Eureka.

But regardless of the occasional misguided storyline (no more May-December sexy romances for Max Headroom please) or sappy plot resolutions, this town is well worth tuning into.