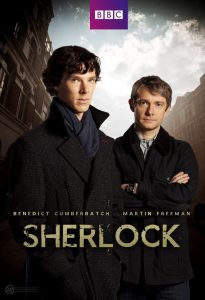 The current BBC incarnation of iconic British detective Sherlock Holmes is stylish, entertaining and increasingly silly. In a world where chaos theory does not seem to be a thing, Sherlock solves cases that grow more far-fetched as the series goes on. Sherlock’s intellect is hyped up to such a degree that only the most convoluted mysteries will do to challenge it. The most recent season featured no less than two Super-villains with such insane levels of foresight and such mad planning skills that it’s hard to focus on the funny dialogues, as you get too distracted by all the eye-rolling you’re doing. 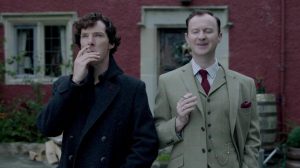 I really liked showrunner Steven Moffat’s work on the comedy series Coupling and on Doctor Who. He combines breezily comedic scripts with an eagerness to come at stories from an odd angle. The experiments don’t always work, but when they do, the results are very entertaining. Because of an insatiable craving for layering twist upon twist, he does have a tendency to leave you scratching your head in the end, not convinced that it all hangs together. His plotting tends to be dense, sometimes in both meanings of that word. Co-creator Mark Gatiss writes episodes and stars as Sherlock’s brother. As the most recent season was co-written by Moffat and Gatiss, I guess both of them share both the praise and the blame, for a show that is still fun to watch but also running off the rails a bit. 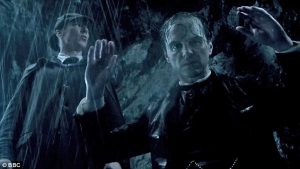 It’s a shame because with two hard to nail down leads (Benedict Cumberbatch and Martin Freeman) there may not be much opportunity to course-correct and end the series on a high note. My overall impression is that the writers are trying too hard to be clever. Straightforward crime mysteries with witty banter have apparently been deemed too boring to hold the attention of a modern audience that suffers from attention-deficit disorder. So what Sherlock has become now is an overwrought Superhero story, including a spunky sidekick, dastardly villains and even an Evil Lair. With less intense plotting, there would be more time for the characters to breathe and bounce off each other.

With no guarantee that there will be another season, the writers opted to wrap things up fairly neatly. So even if this turns out to have been the final season, despite not living up to seasons past, this incarnation of the great detective does at least have a proper ending.