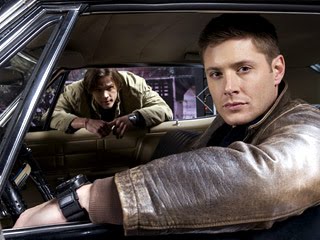 By all rights, Supernatural shouldn’t have made it past a first season. It started off wobbly, without most of the mythology that became such a big part of the series later on. Initial episodes were primarily stand-alone, with the promise of a more overarching story. Each week Supernatural would shamelessly rip off the plot of a classic scary movie, cheerfully including various horror cliché’s. Some of these episodes were good, but a lot of them were decidedly ‘blah’, not hitting any home-runs in the plotting, writing or acting departments.

The set-up: Sam and Dean Winchester (played by Jared Padalecki and Jensen Ackles) are brothers. As kids – Sam was a mere baby – their mother died mysteriously, or to be more precise: burst into flames while floating against the ceiling above Sam’s crib. The brothers were dragged around by their father for years, who – looking for an explanation for the impromptu barbecue – turned into a hunter of demons and other infernal beasties. Sam opted out in his teens and enrolled in college, trying to build a normal life for himself, but at the beginning of the series he is dragged back into the family business. Cue the brothers hitting the road in their soon-to-be iconic Chevrolet Impala, looking for their dad and fighting the good fight as they go.

It’s not until season two that things start to heat up – the mythology builds on itself and the cast of recurring characters grows a bit. Though the brothers always firmly remain the focus – the ‘tough’ wise-ass Dean a little more than his sensitive-but-with-a-major-dark-side brother – they also pick up a surrogate father in the shape of fellow ‘hunter’ Bobby Singer (Jim Beaver), giving the series more heart. By season four they even ‘adopt’ an Angel – yes, an actual Angel – called Castiel (Misha Collins) who starts off intimidating and ends up frequently hilarious, as he tries to interact with humanity.

Though Supernatural started out generic, it gained a distinct personality as it went (somewhere in-between The X-Files and Buffy – The Vampire Slayer), making it a pleasure to watch. The chemistry between the main cast didn’t gel straight away, but grew solid over time. And the series became great at poking fun at its own silliness, mostly by way of Dean’s sarcastic one-liners, but also through self-aware and occasionally postmodern scripting. At one point a writer turns up who is writing about the brothers’ adventures in the form of a series of pulp novels called Supernatural. (There is a complicated explanation for this, of course.) Consequently, Sam and Dean end up walking among fans of the book-series, during a convention where everyone is impersonating them. The Winchester brothers also come across online fan-fiction based on the books, labeled ‘Wincest’ – which is a phenomenon that, somewhat disturbingly, actually exists. Use your imagination to guess what it entails. To quote Sam: “These people are sick!” To be fair, the writers of the television series are partially to blame for the erotica, as a recurring joke throughout the series is that the brothers are mistaken for a gay couple. Further postmodernism ensues when the brothers leap into the bodies of two actors (called Jared Padalecki and Jensen Ackles, of course), the stars of a television series called Supernatural. At one point during that episode, actual series creator Eric Kripke makes an on-screen appearance, only to get gunned down in slow-motion.

Over the seasons, the stakes have been raised higher and higher; by the end of season five the Winchesters have both already died at least once, but dying only slowed them down for a couple of episodes on each occasion. Things culminated in a battle between Heaven and Hell, the brothers getting caught at the center of things. It’s not surprising to learn that this was supposed to be the ending for the series initially, but Supernatural still did so well it was renewed. Creator Kripke left the show, leaving executive producer Sera Gamble to figure out where to go next. Time will tell if the series has peaked, as it will be hard to beat the dramatic high of seasons four and five. For the moment though, the tongue-in-cheek-yet-serious adventures of the brothers, their substitute dad and the loopy Angel still make for compulsive viewing. 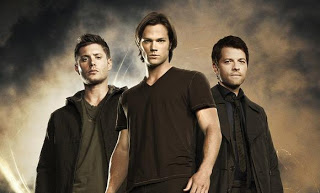