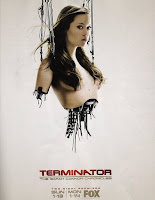 I love time travel stories, even though they generally drive me nuts. The first Terminator movie made fictional sense: something bad came out of the future and this future could not be avoided because – in a sense – it had already happened. When they apparently DID avoid this future at the end of the second movie, the logical thing to happen would have been a total reboot: Sarah back at the diner as a waitress. No Terminators, no son, no nothing. Because those events in the two movies ultimately wouldn’t have happened and had been undone, you see? Back to the Future showed this effect at work, Michael J. Fox slowly fading out (though you’d think it would be more like an instant *plop*) when he messed with his past / his parents’ future. But that trilogy threatens to make me go off on a long ramble about the butterfly effect, so let’s get back to the Terminator saga.

By the third movie, the human-machine war starts – and it seems to be at the forefront of an upcoming new movie trilogy of the franchise. But now we also have the television series, which must be an alternate reality, as Sarah Connor sidesteps her death – as mentioned in the movies – by a jump from our recent past into present day. She is helped by a reprogrammed Terminator, who looks like a sweet girl. This machine is driven by curiosity and cold reasoning, fascinated by human behaviour while letting nothing keep her off her goal of protecting John Connor, the future leader of the rebellion. The fembot is played very well by Summer Glau, who previously showed off her kookiness in Firefly and in this role gets to kick quite a bit of ass. John and Sarah Connor unfortunately aren’t all that interesting so far. Sarah is strong and stoic, but lacks charm, while James seems more a surly teen than a potential leader. Their main goal in the series is still to avoid the war which already became a reality in the movies. 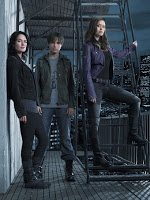 There is a fair amount of ‘reinterpretation’ of Terminator lore here: where it once seemed there were only two models of Terminators – both made in large quantities – there are now a lot of them with different faces. On top of that, I think the first movie stated that only one man and one machine could be sent back in time. The second movie already messed with that statement and this series throws it completely out of the window: multiple machines and multiple humans travel back in time to suit the plot. This makes for major cause-and-effect headaches, such as: doesn’t messing with the past on this scale change the future in itself, especially considering the previously mentioned butterfly effect (meaning: any minor change will have major consequences)? And if the Terminators didn’t find themselves blinked out of existence after sending the first machine back, why send a second one? Didn’t Sarah obviously fail to avoid the war? And why does Sarah want to avoid that future even though it likely means that her son will cease to be? Alternatively, in the case that changing the past doesn’t erase the future but results in the creation of an alternate timeline, why bother going after someone in the past who can’t affect ‘your’ reality? Is your head hurting yet?

Apart from the special effects budget, I have to wonder why the improved, liquid metal Terminator model has not shown up yet. Is the future saving him as a last resort? And why wouldn’t the last resort be sent back to an earlier point in time, as you don’t have to be linear when time-travelling? It is somewhat worrying that all this shaky logic is at the core of the plot, but not being discussed. Maybe the show-runners are just stalling to be able to come up with a coherent explanation. The only way to enjoy the series is to let go of all reasoning, just watch the action and not ponder any of it. As it stands, Terminator: The Sarah Conner Chronicles serves as a run-of-the-mill action series with average writing that will need to find a way to stand out from the competition, aside from its affiliation with the Terminator franchise.