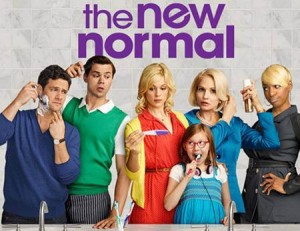 In the comedy series The New Normal, a gay couple decides that they want to have a child and goes in search of a surrogate to carry their baby. They find one with a precocious young daughter and the duo soon moves into the gay couple’s mansion. The surrogate’s right-wing and homophobic mother is alarmed by her daughter’s plans and is drawn into the orbit of this alternative family. Also, there is a sassy assistant. 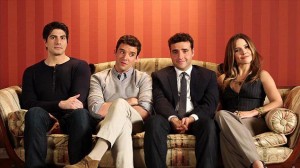 The New Normal was launched at about the same time as Partners, a Will & Grace-like gay-themed comedy series filmed the old-fashioned way: in a studio. Despite starring Ugly Betty‘s very funny Michael Urie, Partners was cancelled after just a few episodes, most likely for being a bit of a throwback. The New Normal was fresher, taking a more documentary and sometimes surreal approach. It managed to reach a full season, but unfortunately it also won’t be returning for a second one. The sad part is, I kind of understand why. It was an easy series to like and a hard series to love. Leaving people luke-warm is not a good survival strategy in the world of modern media, with its overwhelming amount of competing content.

The series is likely too saccharine and sexless for its gay audience, while inevitably alienating some people because of its gays-as-parents theme. The main couple is charming but unbelievable as a couple. There is the straight-acting one (David) who digs sports, has mostly (very accepting) straight buddies and there is the non-butch one (Bryan) who is superficial and obsessed with style, but is also sensitive and caring. It seems the writers were going for a balance. ‘We’ll have one guy who defies stereotypes and another one who allows us to acknowledge and play around with those stereotypes.’ Unfortunately, this plays right into those ignorant ‘So which of you is the woman?’ questions straight people may ask. And what is evidently missing from the coupling is the ‘passion’ factor. There is a flashback that shows David and Bryan meeting for the first time. Going by this scene, Bryan is literally the first guy that David meets, in the first gay bar he goes to. So, that other misconception is also proven true here: you can just introduce any two gay guys to each other and a match will instantly be made. But it is a match made by committee in this case. You just can’t imagine these guys having hot, steamy sex. They seem like two friends who like sleeping in the same bed. 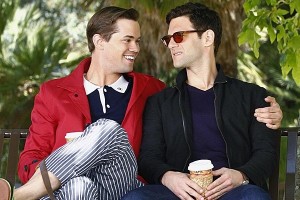 Not helping on the likeability end is that both partners have wildly successful careers and money to burn. Rooting for a flawed pair of underdogs would have been more appealing than relating to two somewhat spoiled rich guys who seemed to have a nigh-perfect life and no real problems apart from being caught out in the womb-department. But I guess they had to be above reproach to serve as parents-to-be.

The spice in the series comes from Ellen Barkin as the in every way politically incorrect surrogate’s mom. In real life, a restraining order would likely be called for, but here she hangs around to provide antagonism and laughs. She works well as a comic foil, but the trajectory here is all too clear. She will be proven wrong time and again and ultimately mellow out a bit, but not to the point where she stops being funny.

Despite all the negativity above, the show is entertaining and manages to make you smile if not quite laugh. It is very well-produced and shot and the set-up is an original, if flawed, one. Maybe the show would have found its footing given more time and gained more of a bite. But… I fell behind after about twelve episodes and have yet to see the last ten or so. I will watch them at some point, but I understand why people – like me – tuned out. Maybe my judgment here is premature and the series really picks up in the second half of the season. But it was too little, too late. 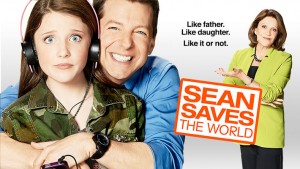 Stepping up next to the gay-parent plate is Sean Hayes (from Will & Grace) as a single guy, raising a 14-yo daughter, in the studio-filmed comedy Sean Saves The World. Will gay audiences forgive him for staying in the glass closet all throughout his stint as Jack, possibly the gayest person on television for years? And will straight audiences care? I am doubtful. The series seems to be a throwback, just like Partners and I expect it to share the same fate. But fingers crossed.