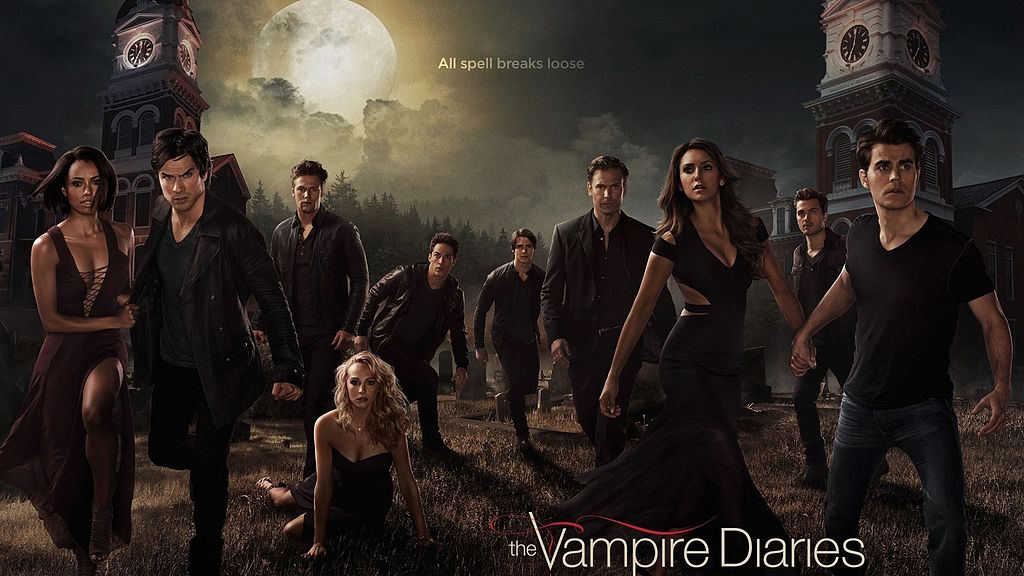 I have a confession to make. I am a grown-ass man and have watched all eight seasons of the teenage-aimed vampire soap that is – sorry, was – The Vampire Diaries. My boyfriend made me do it. Or I made him do it, opinions differ. But after a long and turbulent run, the show’s reign of guilty pleasures has finally ended. (Fittingly, the finale was aired on almost the exact date that Buffy – The Vampire Slayer had its 20 year anniversary.) TVD went out as it lived, with some frantic and confused plotting that had holes showing. But as always, this did not really matter as the plot was subservient to emotional pay-offs. 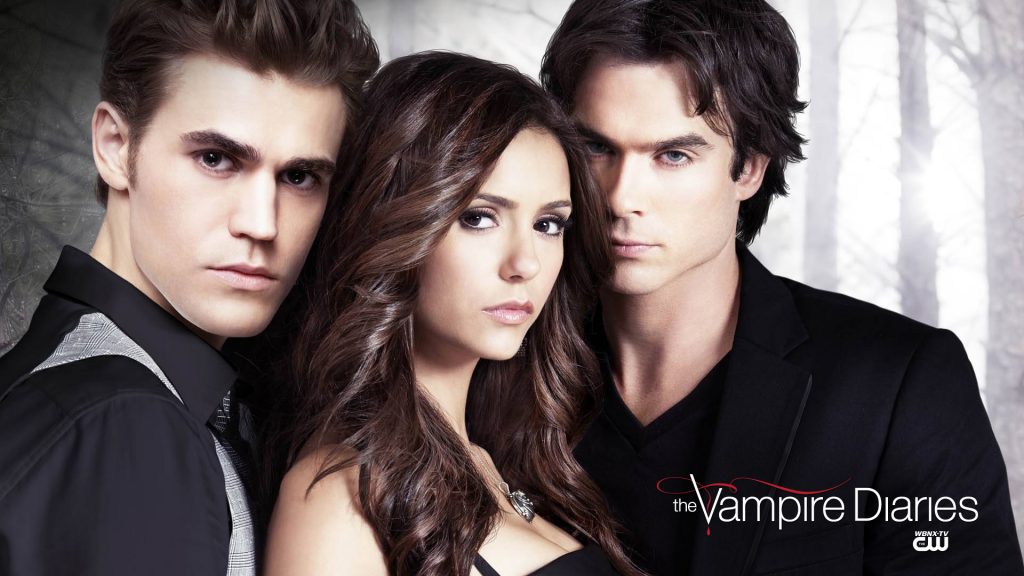 The Vampire Diaries started out as the story of two handsome 100+ year old vampire brothers who both fell in love with the same teenage girl. Not creepy at all. There was Stefan, the James Deanish well-behaved one (Paul Wesley) and Damon, the sardonic bad boy with steely-blue eyes (Ian Somerhalder). See my Season 1 review for more details. The girl (Elena – Nina Dobrev) bounced back and forth between the two brothers various times before bouncing out of the series altogether after six seasons. The emphasis then shifted to the bond between the two Salvatore Bros and their search for redemption. 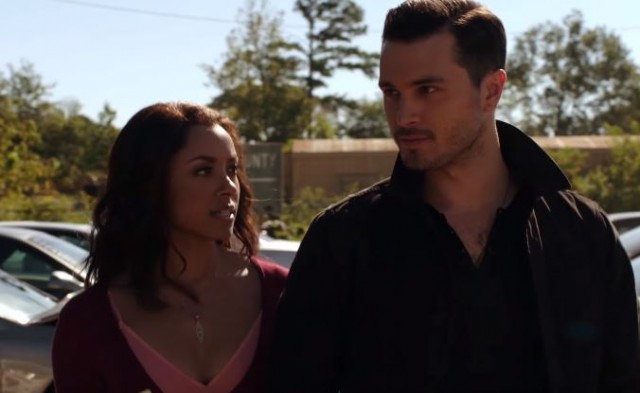 Redemption was a tricky theme for TVD, as by later seasons – with little exaggeration – most of the characters were either mass murderers or had been enabling the mass murderers. There was always a reason to forgive and forget, of course, to keep viewers invested in a happy ending for the ‘heroes’. The perpetrators had been under a spell or suffering from blood-lust or had some other perfectly reasonable excuse for killing. There was one judgey human – as opposed to vampire, werewolf, siren or other supernatural entity – who kept pointing out the immorality of it all, but his perfectly reasonable stance was mostly ignored by the others, and he wasn’t entirely blameless himself either. Even in the last season Damon, the ‘reformed’ bad brother, saw no harm in killing a guy for squeezing a waitress’s ass, because obviously that’s a death penalty right there. Untold numbers of innocents bystanders – hundreds, easily – went unmourned by the scripts and the viewers, because there was no emotional investment. At most, one or two of the heroes looked sad for a moment and then the story would move right along. TVD declared over and over again that killing random bystanders to protect your loved ones was a perfectly reasonable way to live. 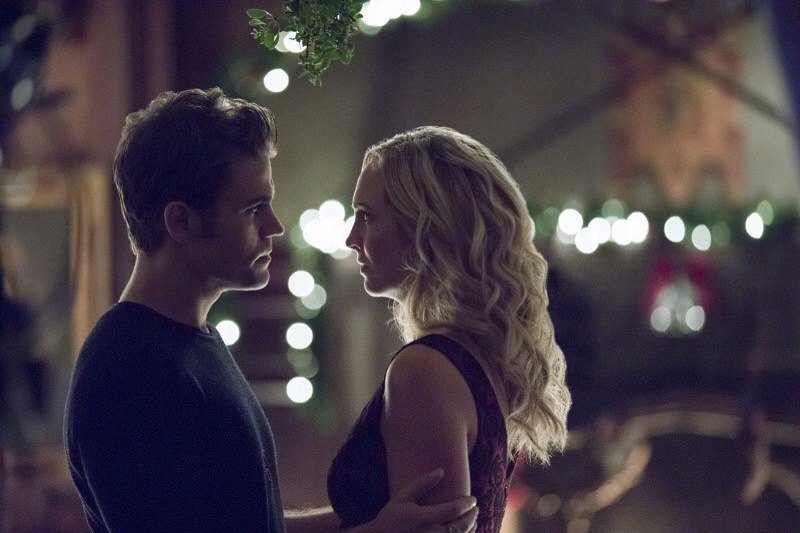 Because the TVD plots were twisty and moved at a high speed, things quickly got convoluted. TVD turned into one of those series where most of the characters had flipped between being great friends and mortal enemies so often that it was hard to keep track. As a viewer, it was best to only keep a vague recollection of previous episodes and just live in the ‘now’, not wondering about how well it all tracked under close inspection. With the amount of magical and mystical stuff going on in the appropriately named town Mystic Falls, there was a constant escalation of danger. Taking away from the tension was that death tended to come easily but often temporarily. And no matter how dire things looked, you could always count on the writers to come up with something creative but far-fetched to get themselves out of any corner they almost painted themselves into. That’s not to say these inventions were always especially well thought-out. The series’ concept of an afterlife – and heaven and hell – was pondered quite a bit but always remained vague. 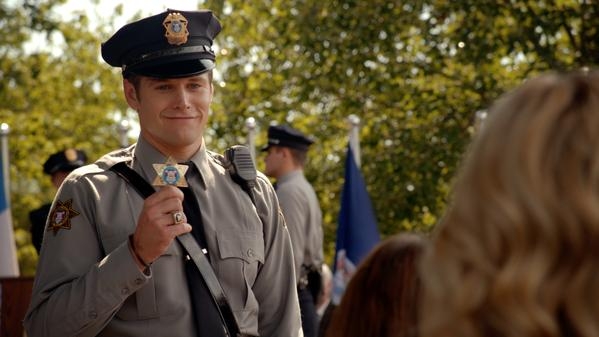 For something as hysterical and trashy as it was, however, TVD remained a lot of fun until the end. There was a spark to the dialogues and the actors were game, giving it their best. (Admittedly, sometimes their best wasn’t all that great.) Damon’s banter – and Ian Somerhalder’s glee at delivering it – didn’t get old. Nina Dobrev was missed during the last seasons for her portrayal of multiple characters (long story) – especially fan-favorite, devious Katherine – but Kat Graham stepped in nicely as the female co-lead, with Candice King also upping her game to compensate for the loss of Dobrev.

Mystic Falls may have been a deathtrap for its merely human inhabitants – and a party town, with a major shindig featured almost every week it seemed – but it was a fun place to hang out for viewers. At least we still have the underperforming spin-off The Originals coming up for at least one season. (Review here.) The TVD finale hints that we may spot some of the TVD characters there in the future. Losing The Vampire Diaries is a mixed bag. Yes, it was time for it to go and one could argue it should really have ended a season or two ago already. But damn, I will still miss this overdose of malarkey.