Games at the ABC, board or otherwise, by Steven

Reading is a great way to spend your free time, but can be a bit solitary. Gaming with others makes for a good change of pace, but a lot of digital gaming systems like the Xbox 360 and Playstation 3 are focusing on online multiplayer games, so you still end up at home alone. More ‘gezellig’ is definitely inviting people over for some face-to-actual-face time around a table. Instead of cussing each other out over a microphone, you can eat, drink and be merry, while having a game experience together. There are different group dynamics you can go for: in some games you compete or actively try to trip up other players, in others you work together to achieve a common goal. So even if you are not particularly competitive, you can still have a good time with a board game.

Pandemic is a good example of cooperative play: you have to band together to stop a disease from spreading across the globe and dooming humanity. Surely a noble way to spend an evening. 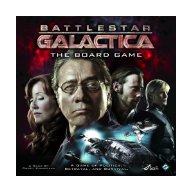 There are a lot of games, with a broad range of themes, to be found at ABC, both in The Hague and on the first floor in Amsterdam. Some of them don’t require a board, just cards you can carry around with you for a game on-the-go. Our selection ranges from games that are easy to pick up and play in a couple of minutes to complex games that can last three hours or more. The last category (containing games like Arkham Horror and Battlestar Galactica – the board game) requires a bit of a time investment when it comes to figuring out the rules, but makes up for that by depth of play and these games can really drag you and your gaming group into a particular world.

If you are a bit daunted by the amount of games on offer, not sure which one to pick, you can of course ask our ABC crew for advice, but there are also sites that can help you find a game to suit you and your particular group of friends.The main site to go to for information is BoardGameGeek. They rate games, feature reviews and game session reports by players, have tons of themed ‘geek’ lists, post alternate rules if the original ones for a game are ‘broken’ and give vital statistics on a game, like: average play time, recommended amount of players, recommended age and so on.

There is also plenty to watch on YouTube: video reviews of games and tutorials for games, for people who find it easier to learn how to play this way than to read a manual. There are also flashy official trailers to be found for some games, if you want to hear the sales pitch. The most ‘present’ of reviewers is Tom Vasel, who has his own site The Dice Tower and a podcast. Seated in front of a wall of games, he gives articulate opinions. Another well-made YouTube feed of note, apart from ‘thedicetower‘, is ‘boardtodeathtv’. Additionally, there are somewhat less polished enthusiasts like ‘Grudunza’, ‘snicholson’, ‘theboardgamefamily’ and ‘Kerbster76’.

Currently in stock at The American Book Center are English versions of classics like Scrabble, Risk, Settlers of Catan, Monopoly and Carcassonne, but we also have games you might never have heard of: 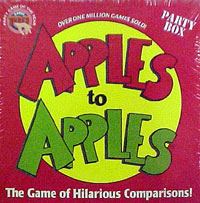 Apples to Apples: A word game matching noun cards (i.e. “Abraham Lincoln”) to cards with adjectives (i.e.”frivolous”)
Fluxx: The card game with the continuously changing rules!
Munchkin: A very funny card game take on role-playing games.
Ticket to Ride: Connect your two train end destinations and try to monopolize as many routes as possible in the mean time.
Battlestar Galactica: Play as one of your favorite Battlestar Galactica characters and help save the last of humanity from the Cylon attacks. But who among you is secretly a Cylon themselves?
Axis & Allies: The World War II strategy game.

The following titles aren’t in our online database but should be in stock or available to order: Taboo,Zombie Dice, Harry Potter Hogwarts, Pandemic, Dungeon Quest, Arkham Horror and many others.

We also sell a lot of different Dungeons & Dragons guides, which help you set up a roleplaying session. And there are card sets for the well-known Magic: The Gathering card battle system.

If you can’t find a game you are interested in at our stores, ask at the register (first floor in Amsterdam or at The Hague), as we might be able to order it for you. If you want to get in touch with other gamers, come visit one of our game nights, visit Ducosim , join the Netherlands Roleplayer’s Guild or have a look atthis list of clubs.

Drop by on December 12th and game on!