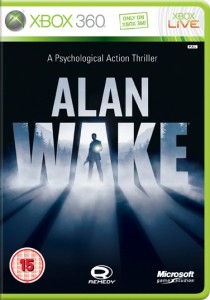 The first two words spoken by the narrator & lead of the X-Box game Alan Wake are ‘Stephen King’, which could be a respectful homage ór a plea to the writer to please not sue the company behind the game (Remedy Entertainment) for so obviously feeding off his ideas. In the game, a bestselling novelist with writer’s block and his girlfriend go on holiday to one of those small, typically American towns that reek of Twin Peaks. There are log-cabins, lumberyards, misty forests and – as it happens – there is an Evil force that lives off people’s creativity. Before long, Wake has a memory lapse, his girlfriend goes missing and shadowy figures that seem to have sprung right out of the pages of one of his own manuscripts are after him in a bad, homicidal way. It’s up to Wake to save his lover, the town and even the world, all while trying to retain his precarious grip on reality.

Mood and story are the main event in Alan Wake. It is a very polished game: it looks great, sounds great and it’s as atmospheric as survival horror games get. Like Silent Hill, Dead Space and The Suffering, this is the sort of game that needs to be played at night with the lights off and headphones on. You will be running through dimly lit streets, factories, abandoned buildings and miles of creepy forest and will soon learn to fear the sudden gusts of wind and mist that signal the arrival of packs of murderous, glowy-eyed rednecks, about to pour themselves at you from the shadows. The game is very clear about one thing: light is good, darkness is bad and the first can be used to beat the latter. Battle in Alan Wake entails pointing a flashlight at an enemy to weaken his bad mojo and then putting a well-aimed bullet or two into his head. Bullets and batteries for the flashlight are both in short supply, so some strategy and a little trial-and-error are necessary. There are also flash-bangs and flares, the first one doing a lot of damage in a short burst, the second one clearing an area around you for a while, handy when you’re in danger of being overwhelmed or want to clear yourself a path. Often the bad guys don’t stop coming and your only option is to fend them off while on the run. The game makes clever use of save points: you are constantly rushing towards the next pool of light – beneath a lamppost or inside a building – and reaching one doesn’t just save you, it also automatically saves your progress. Relief all around.

Manuscript pages – possibly written by yourself at some point – can be found all over the place as you go. They describe people you met or are about to meet and situations you already lived through or upcoming ones you hope you will survive. It effectively deepens your involvement in the story and builds tension – like when you find a page predicting you will face someone with a big chainsaw and then hear the dreaded sound start up in the dark a while later, remembering with a shock what is about to happen.

The original game has a somewhat ambiguous ending – which I won’t spoil – and the story continues in two downloadable titles: The Signal and The Writer. Narratively speaking the two just about cancel each other out, which was presumably done on purpose so someone could just finish the main game and then skip straight to the inevitable full sequel without feeling like they missed something in-between. These expansions get a bit more detached from reality and more playful: you can shine your flashlight on words to make them shimmer and transform them into the thing they signify. For instance: if you see the word ‘bridge’ floating about, you can light it up and let a bridge pop into existence. The game gets creative with this concept. At one point you are walking through a minefield of words, most of them trouble, trying to avoid touching them with your beam, at another you are besieged, running among hills that blast apart when you hit the word ‘light’ (or something similar), bathing the area in cleansing light from a nearby lighthouse.

Alan Wake is a great game for people who like a very linear, controlled experience. A sandbox-game this is not: you can explore areas a little at the risk of getting jumped by enemies, but you can’t get too far off course and there is just one way to go ultimately. Ammo is tightly managed: if you succeed in carrying over ammo from one save point to the next for a while – good for you. But the game makes a habit of regularly taking it all away in a cut-scene, forcing you to rebuild your limited arsenal.

Alan Wake takes itself pretty seriously for the most part, though there is room for humor and most of the characters are good for a laugh, such as Alan Wake’s loudmouthed agent Barry Wheeler and two elderly rockstars who used to be in Viking-themed band called ‘Valhalla’. Some of the more artificial gameplay elements stretch believability. Just who has been leaving stashes of guns, ammo, flares, flashlights and batteries all over the place? The game gives an explanation, but it seems a bit half-hearted. Downright silly and pointless are the coffee-thermoses you can find all over and collect. I am not sure who decided those were a good idea, but they challenge realism for no good reason. Speaking of which, there is one glitch in the animation that is scary but was likely not intended to be: the mouths sometimes look freaky when characters are talking. Especially the jaw of Alan Wake’s girlfriend eerily looks like that of a ventriloquist doll, limply bouncing up and down as she talks. Let’s hope they fix it for the sequel.

I am not sure where else they can take Alan Wake. The unique flashlight-plus-gun concept seems tapped out by the end of the game, so a thorough shake-up of the formula would be needed. And I wonder how much more playing with the line between fact and fiction they can do without the plot entirely disappearing up its own backside. But I had a great time experiencing this game, so I’m curious to find out. 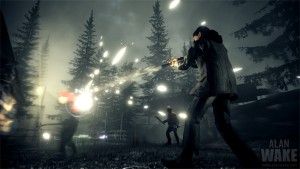