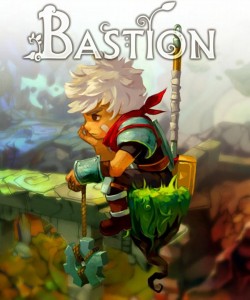 Bastion is an action game with an isometric view, in which you play a kid called The Kid. You battle monsters with a creative assortment of weapons in a melancholy, but colourful storybook world. The sad part comes courtesy of something called The Cataclysm, which blew apart your homeland and turned nearly all the inhabitants into pillars of dust. They still stand around the place, falling apart if you happen to bump into them. The remaining pieces of land float around impossibly, kept aloft by nothing in particular. The ground rises up in front of you to meet you as you head forward, reshaping itself seemingly for your benefit.

The game has a distinct personality – a bit Western, a touch of Steampunk – which is amplified by some very good narration during gameplay, by a voice that sounds distinctly like Morgan Freeman’s, but actually belong to voice-actor Logan Cunningham. The voice gives backstory and  it comments on a variety of things, like the combination of weapons you have chosen to equip or what the player is doing at certain moments. For instance, if you trash your surroundings to test out the first weapon you get, the narrator will drily note ‘Kid just rages for a while.’ The soundtrack is also very good, with an occasional Western twang, good beats to get the pulse going and some quiet, soulful moments as well. 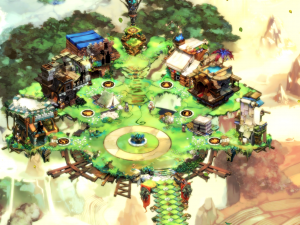 I played this game on my iPad, rather than a PC. Touchscreens do all kind of things very well, but usually they aren’t optimal for navigating a videogame world. Some games resort to indirect controls, having the characters move to where you touch the screen. Other, more action-oriented games – like Bastion – often have a virtual gamepad. You drag your left finger up, down and sideways to make the character move in the direction you want, while buttons on the right hand side let you perform certain actions. Lacking any tactile feedback, it’s not the best for frantic action or something that requires a lot of precision. While on a gamepad, you can press the stick ‘up’ frenetically to signify you want to go as fast as the game allows, on a touchscreen this will just make your finger slide upwards, requiring readjustment. 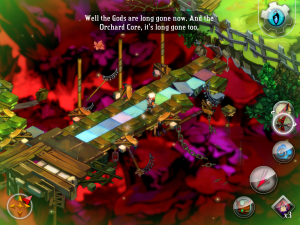 Given these limitations, Bastion‘s controls actually work pretty well. You will occasionally plummet to a virtual death when trying to walk somewhere narrow, with a minor penalty to health. And quickly turning around is a problem. But these are just minor annoyances as the game doesn’t demand more precision than its controls can offer. Bastion is compatible with gamepads for iDevices, so you do have the option to play it that way. Or just stick with the PC version instead. 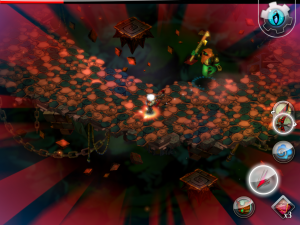 Bastion is not especially hard if you consistently keep an eye out for collectibles and goodies that help you level up and upgrade your weapons. The arsenal has a good variety, with a few guns, a pokey stick, a hammer, a flamethrower, a grenade launcher and a bow. You can pick how you want to upgrade each and you are only allowed to take two – of your choosing – to any particular section of the game. This allows for some strategy in how you balance your weapons. Some will likely end up completely ignored – I was a bit bored by the guns – while you power up others to the max – like I did with the bow. Your can also gain special ‘moves’ and potions and get rewards for achievements. Should you want more of a challenge, you can ‘worship Gods’ who will make the fights harder in one way or another, but reap you greater rewards. 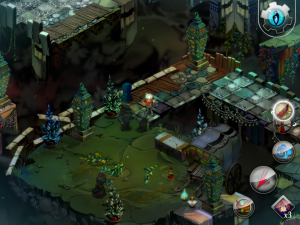 I really loved the look, sound and feel of the game and liked the actual gameplay. I can’t see myself replaying the game though, to experience weapons and playstyles I hadn’t explored yet. For that, the fighting gets just a little too samey by the end, something a different weapon loadout alone wouldn’t change. Bastion is just about long enough, wrapping up when you’re not bored yet, but are okay with saying goodbye. The plot remains a bit fuzzy, but the outline is charming enough that it doesn’t matter. By the time you decide which of the two available endings you want to choose, you’ll be looking back on a trip well worth taking.