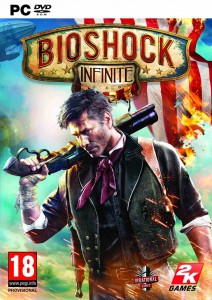 The BioShock franchise has abandoned its waterlogged roots to explore a city improbably floating around high in the sky. You (Booker DeWitt) arrive there to track down a girl. You only know you have to take her back down with you to make up for some unspecified debt. The society you encounter is creepily cheerful, full of faith in its leader (The Prophet) and it is rabidly xenophobic. Slavery is still a thing and you get the feeling you have walked into a cult. Gleefully, you realize it is only a matter of time before the whole sick system gets torn to shreds. And in typical BioShock fashion, once it has, you still feel somewhat bad for the bodies you come across everywhere.

BioShock Infinite pulls off a neat trick by giving you a companion throughout most of the game who doesn’t get on your nerves, doesn’t get in the way and actually helps you out. Elizabeth, the girl you were sent to get, is an ace at picking locks and she scrounges around during fights, throwing you health and ammo when you need it most. She also can rip tears in reality (long story) and pull, for instance, an automated gun into the fray, to fight for you. Elizabeth looks very much like a Disney princess, but there is a darkness to her, as you will come to find out. She is a strong female character, by game standards, though she remains the damsel in distress and leaves it up to you to take the lead when a fight breaks out. Flipping genders, a guy playing the same role would have seemed like a weakling. But she is likeable and complex (oh boy, is she ever complex) and the fact that you are not a silent protagonist but are actually having conversations with her, really helps to get you invested in the story and the characters. My favorite characters; the enigmatic duo you keep running into from time to time, who speak in riddles, know better than you what’s going on, and who seem to be channeling Emma Peel and John Steed from The Avengers.

The trademark of the BioShock series is the ability to use substances (called ‘Vigors’ here) that give you special powers and to combine these with regular weapons. Some of the powers are not especially novel, like the ability to attack with lava or electricity, while others make you wonder about the mental state of the game developers. The first BioShock, for instance, allowed you to unleash a swarm of bees from your hand to attack your foes. This time around, crows will peck people to death for you and if you wear the right piece of clothing, the bodies of those fallen to them can turn into a trap and spring an equally horrid demise on whichever enemy passes by. Because clothing – found in gift-wrapped parcels, often as a reward or just slightly off the main path – also gifts powers or adds an extra dimension to those you already have. There is no apparent in-story logic to any of this. Why wearing a specific hat would give you a 70% chance of setting an enemy on fire if you punch him, is not explained. Why your character is apparently the only one using these Vigors and this kind of gear also remains a mystery. There are vending machines all over the place that sell Vigors and upgrades, but no one seems to have ever bought them, apart from you. You do occasionally run into super-powered enemies, but these aren’t getting their power from Vigors, relying on technology instead. In the end, you won’t care about how silly it all is, because you’ll be too busy having violent, cathartic fun.

By skillfully combining the effects of gear and various Vigors, you can become very powerful indeed, clearing out an entire room in seconds. There is a feeling of overkill to some of the gear. I stumbled onto a very powerful combination early on and disregarded almost all of the stuff I found later, because it couldn’t compete with what I already had. You’re more likely to switch things up for the sake of variety than because one method is actually a lot better than the other. For instance, even though I normally go for a mid-to-long range approach when playing shooters, I had a lot of fun beating some of the stronger enemies by just repeatedly ramming myself into them at high speed. The powers are at their best when fully upgraded, so any money you find is best spent doing that. If you’re spending it on upgrading your boring old guns instead, you’re missing the point of the BioShock franchise. Also don’t bother spending money on ammunition or health, for that matter. If you systematically search your surroundings, both are in ample supply.

This is one of the best times I had in a while with a shooter. The environments are beautiful and imaginative, the story is twisty and interesting, if a bit convoluted, and the fighting is varied and very viscerally satisfying. On the whole, it’s a pretty easy game on normal setting, even for someone at my mediocre skill level, apart from the frustrating final fight, which is a bit of a slog. A new asset you acquire for that fight alone is very tough to assign to the proper target, to the point where it seemed like a ‘bug’ in the otherwise polished PC version. 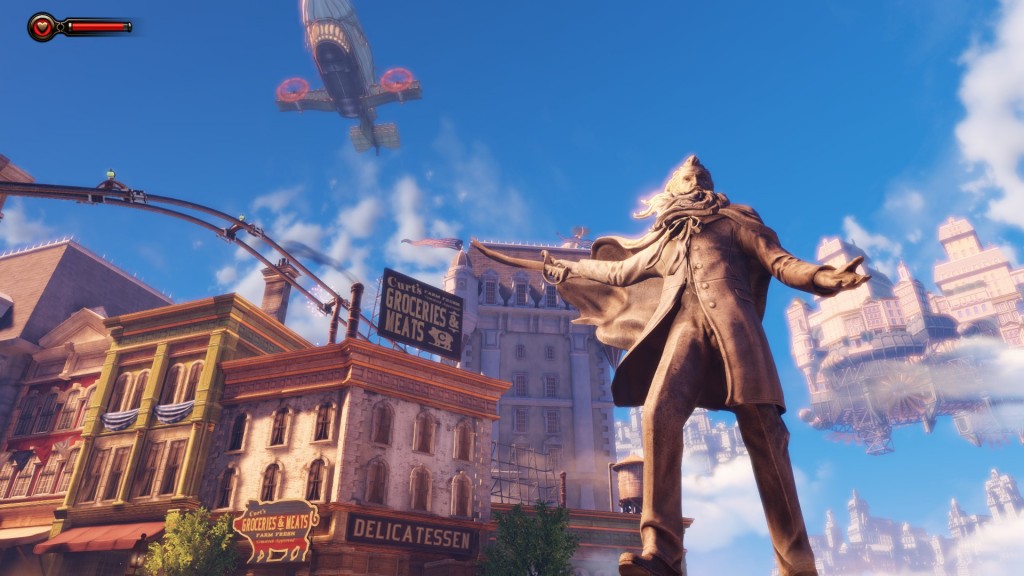 My feelings about BioShock Infinite‘s ending are best summed up by going ‘Uhhhhh…?’. A story that revolves around the bending of space and time is bound to get a little confusing and this game’s ending doesn’t sidestep such troubles even if it hangs together pretty well. Being too lazy to reconstruct everything when I was already hazy on some of the finer points, I looked up an explanation on IGN that seems to make sense. In so far as something this wildly fantastical can really make sense in the end. If you think about it too much, trying to fill plot holes, you’re just likely to end up creating new plot holes. Be sure to sit through the long credit-roll after you beat the game, to make sure you don’t miss a short coda at the end.

There is downloadable content on the horizon where you will surprisingly be playing as Elizabeth in the underwater setting of the first two BioShock games. I will be very happy to return to this dark and fascinating world. More shooters should be this fun and this creative.